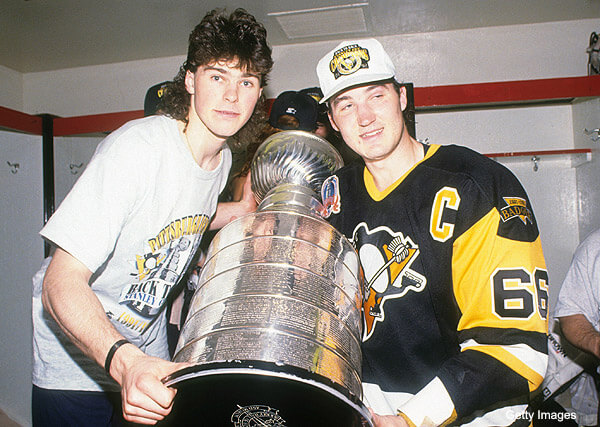 On Saturday afternoon, when the NHL finally dropped the puck on its 2012-13 season, 40-year-old Jaromir Jagr accounted for all four goals for his new team, the Dallas Stars, in a 4-3 victory over the Phoenix Coyotes. His two-goal, two-assist performance kicked off his 19th NHL season in typical Jagr fashion, simply piling up the points at 40 the way he did when he was 18.

As any hockey fan knows, Jagr is one of the all-time greats. There simply is no disputing that. He is currently 8th on the all-time points list, sitting right behind former Hall of Fame teammate Mario Lemiuex, and the handful of Hall of Famers ahead of him. His list of accomplishments is endless: 11th all time in goals, 12th in assists, a plus/minus rating approaching plus-300, five Art Ross Trophies, a Hart Trophy, three Ted Lindsay Awards, two Stanley Cups and nine all-star appearances. His greatness and eventual Hall of Fame induction are indisputable.

But what truly sets Jagr apart from the typical superstar is the arc of his career. No player in the NHL — and no player in any of the four major sports, really — has had a similar career path to that of the one Jagr has taken. For starters, he has played on five different NHL teams, and four of them have been heated rivals with one another, three of them division rivals today. Somehow, he managed to become a phenom and a legend in Pittsburgh, a divisive superstar in Washington, and then hated by his former teams after being traded to the Big Apple.

Then, after taking three full seasons off from the NHL, he returned to spurn both the Penguins and the Rangers by heading to bitter rival Philadelphia last season. In the process, he made four different fan bases who do not like each other whatsoever — Pittsburgh, Washington, New York and Philadelphia — both love and despise him at varying times depending on the sweater he donned. I honestly cannot think of another superstar who went from heated rival to heated rival that often. It would be like if Derek Jeter went to the Red Sox, Mets and Blue Jays to round out his career. It is a bizarre thing, particularly for a player who spent the bulk of his career as either the best or at least most talented hockey player alive.

Then, of course, there is the habit of his younger days of playing overseas in Russia and his native Czech Republic when the NHL season was over, as if the 82-game schedule and playoff runs were not tiring whatsoever. His endurance is legendary.

Of course, those stories were then offset as he got a little older, with tales that Jagr did not even skate or play any hockey whatsoever in the offseason — fables that no one is quite sure if they are fact or fiction.

What we do know is that no matter how he spent his offseasons, Jagr kept himself in remarkable shape. As a youngster, Jagr had the reputation of a pretty boy for his long hair and eye-popping scoring, but if you really watched the guy play, and watch him play to this day, there has never been a hockey player as strong on the puck as Jagr. You simply can't take it away form him. He's much bigger and much stronger than most people realize, making it difficult to move him, and when you add in his remarkable stick-handling, it's simply unfair.

While he has never been the most physical player as far as hitting is concerned, Jagr is one of the most well-rounded players of all time. Offensively, he had no weakness: pinpoint shot placement, quick release, insane passing ability, strong in the corners and with the puck, explosive as a youngster, immovable as an old man. And while he was never anywhere near a Selke-level defender, he used his hockey instincts and smarts to become more responsible in his own zone the older he got.

But the most remarkable thing to me is that Jagr could take three full seasons off from the NHL, return at nearly 40 years old and still put up 54 points and become one of the most important players on the Philadelphia Flyers. Not only that, he became the biggest mentor and role model for a young Flyers team, particularly taking Claude Giroux under his wing. His late-night and early-morning skate sessions set a great example for a team that has little in the way of veteran leadership. And while Jagr was playing hockey in the KHL and Czech leagues during his NHL hiatus, it is still remarkable that he could simply jump right back into the highest level of competition as if he'd never missed a beat.

Now, even at 40 and in another new location, Jagr has all those skills and they are still all sharp as a tack. No, he is not the burner he once was, and yes, he did wear down a little by the end of last season, but Jagr is still usually the best player on the ice with the puck every night, the strongest guy along the boards and the best passer and most creative offensive spark out there. Watching him now, it is as if the entire game slows down around him. The puck is on his stick, and he is in total control. The rest of the players on the ice are frozen, at his mercy. It does not matter that he is old and slow and cannot log 20-plus minutes any longer. He is still terrifying every time he hits the ice.

In a game that keeps getting faster, Jagr seems to be able to turn back time and make those around him play at his pace. And really, that's what he has been doing all along, whether it was piling up the points in the NHL or making North America wait for his return. He has been skating to the beat of his own drummer for nearly a quarter century now, and it is still remarkable to watch.

Jaromir Jagr is an all-time great, yes. But he's also as unique a superstar as professional sports has ever seen.