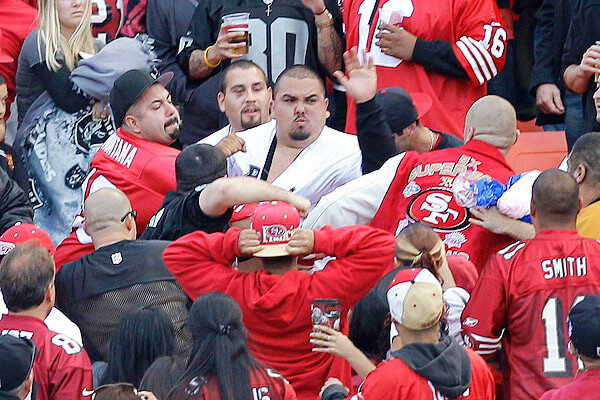 A few weeks ago, I went to the Wells Fargo Center to witness the Chicago Bulls defeat the Philadelphia 76ers. It was something I've done hundreds of times, taking the el and the subway to and from the arena.

As it turns out, I was incredibly lucky to make it home after the game without incident. Because on that very same night, on the very same public transportation I took home, a couple of Sixers fans got annoyed at some Bulls fans who were gloating following the victory. As the Sixers fans got off the el at their stop, one of them pulled out a gun and fired into the train, hitting the two Bulls fans.

Thankfully, neither person was seriously hurt, and both of the hoodlums who resorted to gun violence over a basketball game they didn't even participate in were apprehended and are behind bars. That's the good news. The bad news is this an all-too-familiar story.

Think about all the fights, all the tragedies that occur between fans. There was the San Francisco Giants fan nearly beaten to death at Dodger Stadium. The Phillies fans who literally pummeled another Phillies fan to death over a spilled beer of all things. And there are countless other senseless acts of violence that occur year in and year out in the stadiums, arenas, playgrounds, bars and even public transportation vehicles.

What drives fans to enact violence on one another? Passion is always brought up, about fans being so passionate about their favorite teams that they literally live and die with them. It's what makes being a fan fun, exciting and rewarding. But when that passion turns to violence, it becomes ugly. Yet it's almost accepted in the sports culture.

Don't believe me? Go to any live sporting event. Inevitably, at some point, there will be a quarrel between fans. In too many of those situations, the altercations will become physical. And more times than not, you'll see the surrounding fans cheering the fight on, not intervening to break it up. It's almost a game within a game, trying to find the next fight in the stands.

As we continue in a society that glorifies violence while proclaiming to condemn it, we realize how immense the results of our actions can become. The horrific tragedy in Newtown, Conn., has had the nation take a collective look in the mirror to figure out what steps can be taken to become a more civil society.

However, the conversation never seems to extend to the sports world. It's almost taboo to suggest we take that fiery passion away from the everyday folks who make millionaires out of athletes and line the pockets even further of the billionaires. If there's one thing we've learned as we embark on 2013, it's that we cannot accept this violence simply as "the way we are." Actions must be taken by individuals and the community at large.

And it's about time we extend those efforts to the sports world. Passion and pride, even verbal sparring in a playful tone — those things are traits every fan should have. But the violence, the fighting, the bullying, the killing — they must stop. It's time, as a sports fan community, that we turn this senseless ritual around. Sports and violence, they go together in contact sports. But that shouldn't extend to the stands and bar stools.

The only way to change the culture is to change the way we behave. Go to games. Get in arguments over which team will win. Have playful banter with the opposition. Root your team on. Have fun. But once and for all, put a rest to the violence for good. Add that to your new year's resolutions list.