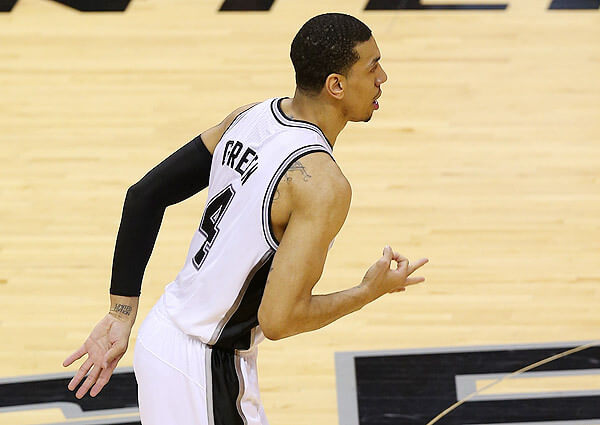 As you may have heard, San Antonio Spurs forward Danny Green has been going bonkers from beyond the arc during this postseason and especially in the NBA Finals against the Miami Heat. So much so that his name is being tossed around as a potential Finals MVP should the Spurs take home title number five of the Tim Duncan-Gregg Popovich era on Thursday night — this despite his struggles last night.

On top of his marksman shooting from distance, Green has also played tremendous defense on LeBron James and others, working in tandem with Kawhi Leonard to neutralize Bron as well as anyone ever has.

Given all his success in the 2013 NBA playoffs and his emergence as a season-long starter and sharpshooter during the regular season, it's easy to forget that Green has taken an atypical road-less-traveled journey to sudden stardom. It's also easy to forget that Danny Green has been doing exactly what he's done this year for the Spurs long before he hit the national stage against the Heat.

You see, Danny Green wasn't a basketball nobody prior to breaking the starting lineup for the Spurs last season. In actuality, he was a highly touted recruit out of the state of New York, a McDonald's All-American who scored more than 1,500 points in high school and landed at basketball powerhouse University of North Carolina to play for Roy Williams.

There, he turned into my favorite player during his four seasons as a Tar Heel as the team's Swiss army knife — a guy who excelled at shooting threes, playing defense and making athletic, posterizing dunks. He was the type of player I always envisioned being a perfect fit in the NBA, which is why it was so surprising to me that so many people were surprised by what Danny Green has done this year. He did all of those things during his days at UNC, and at 6'6" and 210 lbs. with NBA athleticism, it only made sense he'd be a good defensive/shooting wing in the Association.

Yet, during his time at UNC, Green was constantly overshadowed by his other championship teammates. Wayne Ellington won the tournament's Most Outstanding Player in the Tar Heels' championship season. Ty Lawson was the quickest point guard in college basketball and the engine that made UNC run. Tyler Hansbrough was the headline-grabber and stats-stuffer. Hell, even stalwart defender Marcus Ginyard, guard Bobby Frasor and a heralded freshmen class took attention away from Green.

As a result, despite being UNC's glue guy and most versatile player, Green wasn't drafted until the second round by the Cleveland Cavaliers, where he barely got off the bench before being kicked to the curb. The Spurs snatched him up, played him eight games, then sent him packing again. That is until last season, when Green played in 66 games and started 38 for San Antonio, finishing in the top 10 in three-point percentage (43.6%) and posting very solid stats for a spot starter/bench guy: 9.1 ppg, 3.5 rebounds, 1.3 assists, 0.9 steals, 0.7 blocks.

Yet as much as Green established himself as a contributor, he couldn't keep it up in the playoffs, cooling off considerably and taking a seat.

Still, Popovich saw what he had in Green, saw the player that did it all at UNC, the player who could shoot the lights out and play solid defense, and decided now was Danny Green's time. He entrusted him with a starting spot from day one, as Green started all 80 games he played this season, averaging nearly 30 minutes a game and posting another top 10 percentage from three (42.9%) while averaging 10.5 points, 3.1 rebounds, 1.8 assists, 1.2 steals and 0.7 blocks a game. Further, combined with Kawhi Leonard, he gave San Antonio the youngest, most versatile wing duo in the NBA.

Now Green, given the run and the chance, has shown exactly the type of clutch play he displayed in high school and college. He's been absurdly lethal in the postseason, shooting an insane 51.5 percent from three, averaging 11.8 points, 4.1 boards, 1.7 assists, and a steal and a block per game heading into last night, proving the Cavs had no idea what in the hell they were doing letting him walk. Now on the grandest stage, he's playing the best basketball of his life, outshining the LeBrons, Wades, Parkers, Duncans, Boshes and Ginobilis out there up until game 6.

For the series, last night's struggle included, Green is averaging 15.5 points, 1.6 blocks and almost a steal per game, all while shooting an astounding 60.4 percent from three and 51.7 percent from the field … while also already making an NBA Finals record 26 threes with one more game to go. He's making long-distance shooting look easy, making guarding in transition look easy, making LeBron James and the Miami Heat work for everything on both ends of the court.

7 Replies to “It's Not Easy Being Danny Green”