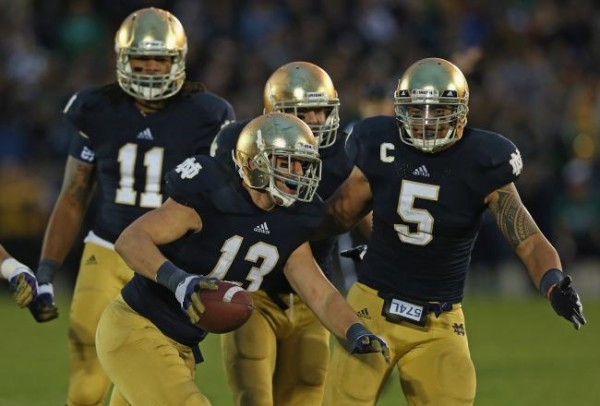 I'm not a religious person. Raised as a practicing Catholic and going to church every Sunday, I know the large part it can play in people's lives, and I certainly do not begrudge those for practicing their faith.

It's just something that's not for me. As I reached adulthood, I lost touch with my Catholic faith and pretty much left it behind for good.

Recently, however, little things have been happening in my life — mostly my sports fan life — that make me take pause and really understand why my parents and extended family are so entrenched with their faith.

You see, my grandfather recently passed away from cancer. He was an Irish Catholic, and he loved Notre Dame more than just about anything besides his family, the sport of football itself and possibly golf.

I saw, first-hand, how much joy the Notre Dame Fighting Irish brought him, first when my cousin walked on to the team under Ty Willingham and even got on the field as a senior under Charlie Weis. And then I got an even closer look when I went out to South Bend for the infamous "Bush Push" game, meeting my grandfather and my uncle out there on game day. Walking around the campus, my grandfather, with all his health problems and age catching up to him, was like a little kid. He was dancing and jigging to the pep band, a smile beaming from ear to ear as we roamed the beautiful campus of Notre Dame.

It was the type of joy that you only get when you really, truly love everything about your surroundings in that moment. I'll never forget the way just stepping foot on Notre Dame's campus brought youthful life back into my grandfather.

I bring this up because converging forces aligned in my sports fan life that made me think perhaps my grandfather still has his hands in things down here, like he has some unfinished business left to attend to.

It first reared its head as Notre Dame seemed to catch break after break in an overtime thriller against Stanford, a win that really propelled them into the national title hunt. It was a curious game with a few curious calls, with the luck definitely residing on the side of the Irish. It made me think of my grandfather, to be honest, like he was up there pulling the strings as best he could.

Then, a few weeks ago, I went to Lincoln Financial Field to witness my hometown Philadelphia Eagles take on the hated Dallas Cowboys. First and foremost, anytime the Eagles take on the Cowboys, I think of my grandfather and did so even when he was alive. That's because his favorite NFL saying was, "I have two favorite teams: the Eagles and whoever is playing the Cowboys." During those NFC clashes twice every year, I heard my grandfather's words in my ear.

But that's not what really jolted me into feeling the effects of my grandfather. No, it was the fact that during halftime, to honor Veterans Day, the halftime entertainment was none other than the U.S. Marine Corps Silent Drill.

You see, my grandfather was (is) also a marine. I'm not sure I can use the word "was" actually, because as he made sure to remind anyone who dared say ex-marine, there is no such thing as an ex-marine. Once a marine, always a marine.

So even though the Eagles lost in typical 2012 Eagles fashion, I couldn't help but feel his presence as I watched the marines perfectly perform the greatest halftime show I've ever seen. 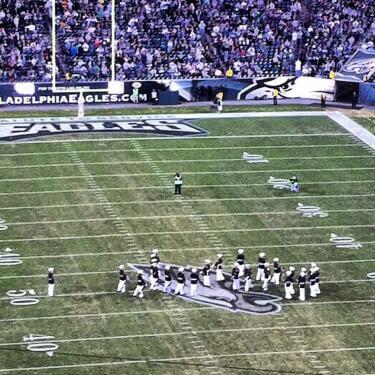 And now, following the victory down in Southern California, Notre Dame sits undefeated and ranked number one in the country, finishing off a perfect regular season and awaiting their opponent in the BCS title game. That's a remarkable thing, considering the Irish were on exactly no one's preseason list to hoist the crystal ball.

Of course, there's still work to be done, and no one knows how the title game will play out. But I get the feeling there are some Irish eyes smiling down on Notre Dame as they try to reclaim the throne of college football.

So no, I'm not a religious man. But my grandfather was. And maybe that's all Notre Dame needs.

6 Replies to “Irish Eyes Are Smiling On Notre Dame”