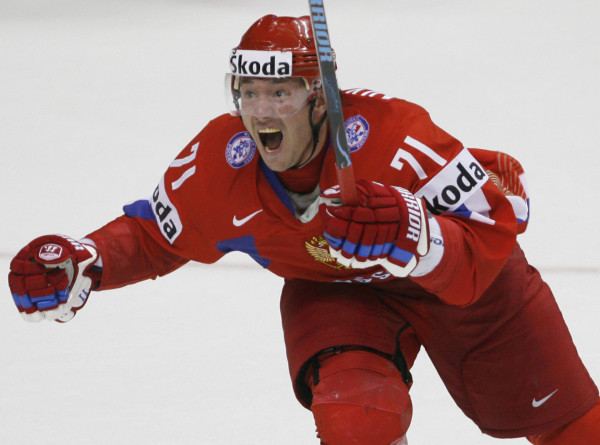 I'm not going to lie — until Saturday's Olympic hockey clash between Team USA and Team Russia, I completely forgot about Ilya Kovalchuk. I mean, I didn't forget about him in the sense that he existed. After all, he played in the NHL just last season. No, I forgot about him as a current hockey player since he's no longer in the league I actually watch. But it didn't take long to remember him in the USA's 3-2 shootout victory, as Ilya showed off his trademark sniping skills in the deciding skills competition, going back and forth with Team USA's T.J. Oshie.

As an avid NHL fan, I was almost embarrassed that I forgot about Kovalchuk until I saw the replay of the shootout. Seeing as I did not wake up in time to watch the game live, all I caught was the overtime and shootout NBC played later. And when it was time for Russia to send out its three shooters, I just assumed Alexander Ovechkin — whose 40 goals lead the next closest player in the NHL (Phil Kessel) by 9 — would be the third man up following the misses by Evgeni Malkin and Pavel Datsyuk.

I was wrong. And surprised. And then embarrassed that I completely forgot about former NHL star sniper Ilya Kovalchuk, who is just 30 years old and as recently as last season was wreaking havoc for opposing defenses in North America. Then Ilya did this (4:20 in), and I couldn't stop remembering his plethora of jaw-dropping highlights.

Kovalchuk was Russia's own version of Oshie, getting sent out for every chance he could except once — as Datsyuk took a second attempt and scored. His two goals put the pressure on Oshie — pressure the St. Louis Blues forward had no trouble dealing with.

Watching Kovalchuk show off his pinpoint accuracy with is first goal and his creativity with his second one reminded North American hockey fans that he is still here.

It also reminded us that Ilya Kovalchuk has been among the most interesting characters in hockey for years now.

First, there was his immediate, meteoric rise to stardom as one of the premier goal-scorers during his time as an Atlanta Thrasher. Sandwiched between his rookie season of 29 goals in 65 games and his final, lockout-shortened NHL season as a New Jersey Devil of 11 goals, he netted at least 31 goals every season — nine straight years — including six straight with at least 41 goals, highlighted by two career-high 52-goal campaigns. He was an elite scorer from the jump, a remarkable point-producer with a lethal shot and incredible offensive skill.

Then rumors swirled of him wanting out of Atlanta, such an ill-conceived hockey market that the Atlanta Thrashers relocated to resurrect the Winnipeg Jets. Kovalchuk denied the rumors, but the Thrashers traded him to the New Jersey Devils anyway.

Along the way, while his talent and offensive production were never questioned, his heart sometimes was. It wasn't uncommon to watch a Thrashers or Devils game and hear announcers and analysts point out Kovalchuk's laissez-faire attitude on defense, and occasionally they'd question his effort.

Still, Kovalchuk continued his sniping ways in Jersey and remained among the elite offensive forwards in the world. The Devils were so happy to have the top-notch goal-scorer that they signed him to a mind-blowing 17-year, $102 million contract. And that, as any NHL fan knows, brought about its own controversy, as the league rejected the deal as it worked to rid itself of exceedingly long contracts designed to circumvent the salary cap.

Eventually, the league did approve a 15-year, $100 million contract for Kovalchuk, as if that is much better, but I digress.

Just four years into that 15-year contract, the Russian sniper decided to up and retire so he could return home and play in the KHL. When the lockout occurred last year, Kovalchuk returned to his homeland as many players did and enjoyed himself so much that he didn't want to return to the NHL. He did, but then retired following the truncated season so he could stay in his native Russia.

He's been the in KHL since, doing what he does. In 44 games this season, he has 16 goals and 24 assists, his 40 points for SKA Saint Petersburg placing him in the top 10 in the KHL.

On Saturday, all the magic he displayed during his NHL days was front and center. And while he may not be competing for the Stanley Cup these days, it doesn't make Ilya Kovalchuk any less fascinating. I'm glad he gave us fans that already kind of forgot about him that Olympic reminder.