The Golden State Warriors and Philadelphia 76ers are on opposite ends of the NBA totem pole, and attending last night's game between the Western Conference's leading team and the Eastern Conference's almost doormat (what up, New York Knicks?) in South Philadelphia, it was easy to see why.

As the two teams took the floor for pregame warmups, the difference between the them could not be more clear. 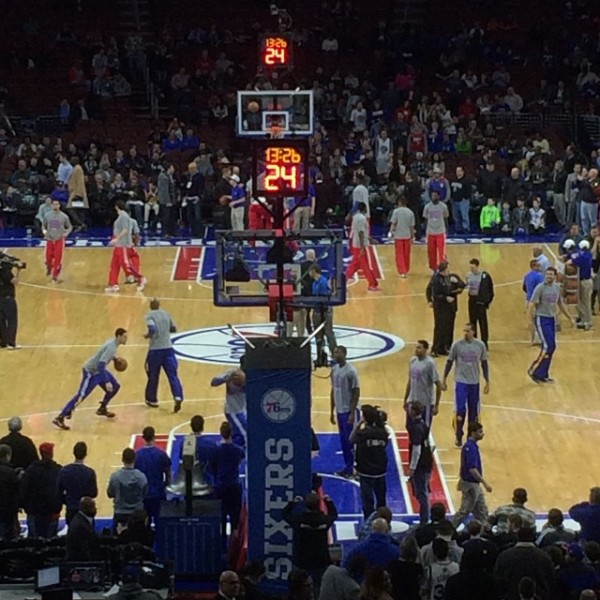 The Warriors have a collection of recognizable talent with names like all-stars Stephen Curry and Klay Thompson, while the Sixers have Nerlens Noel, along with the injured reigning Rookie of the Year Michael Carter-Williams and the indefinitely sidelined third overall pick Joel Embiid. That's it. The rest of the crew is made up of a bunch of guys you can hardly identify even with their uniforms on.

Golden State has depth and a wealth of talent, while Philadelphia simply have a dearth of talent.

Scanning the floor, I struggled to find even one healthy Sixer, Noel included, who would get any burn for the Warriors, and ultimately I came up empty. Whereas Philadelphia has a fringe journeyman in Luc Richard Mbah a Moute and not a single other player with any distinguishable NBA career on his résumé, the Warriors have two former all-stars in David Lee and Andre Iguodala and a former Sixth Man of the Year in Leandro Barbosa coming off their bench.

Whereas the Sixers started a backcourt that doesn't even belong anywhere near the NBA in Tim Frazier and JaKarr Sampson, the Warriors have guys like Shaun Livingston and the aforementioned Barbosa and Iguodala backing up the all-star, superstar duo of Curry and Thompson. Looking at Golden State's bench, the five-some of Iguodala, Barbosa, Lee, Livingston and Marreese Speights is more fearsome than any combination the lowly Sixers can trot out there.

This all played out last night. The Sixers, who have been playing harder and better and smarter the past few months, already surpassing even the most optimistic of fans' projections with 12 wins, came out fired up and took a 24-20 lead after one. They even battled all game long on the strength of Robert Covington's 21 points and energy from the likes of Noel and K.J. McDaniels, who did this.

But the Warriors, even on an uncharacteristically off shooting night for both Curry and Thompson (a combined 11-34 from the field and 4-18 from three), rotated their stable of talented bodies to wear down the Sixers and come away with the ugly but albeit effective 89-84 victory. With Curry and Thompson struggling, Golden State simply rode Barbosa, Iguodala and Speights, along with Andrew Bogut disrupting the Sixers inside defensively all night.

It wasn't the offensive explosion we've come to expect from the Warriors, and for that we should give Philadelphia credit. But even with the Splash Brothers coming up mostly dry, the depth was simply too much for Philadelphia's dearth to overcome.

In today's NBA, it takes a superstar or three to be considered a contender, but the best of the best have even more than that. They have depth, a roster of eight, nine, even 10 guys who can go in and get it done. The Golden State Warriors are the deepest team in the NBA, and they also happen to be the best right now, holding the highest winning percentage in the league.

Last night, even playing down to their opponent and going through a rare shooting slump, the Warriors proved just how powerful a deep roster can be. The Sixers and the rest of the NBA should take note — you don't win just by having a superstar or three. You win with depth, especially over the long haul.

Steve Kerr and the Golden State Warriors are deep, and they very well may ride that depth deep into the NBA playoffs.