Of course, there have been all kinds of other wild theories as well, such as Bill Simmons' entertaining idea of a round-robin tournament to determine the final four playoff participants, with the top six teams in each conference automatically securing a spot.

This is all the rage, of course, because of this season's laughably pathetic Eastern Conference and even more dreadful Atlantic Division. The thinking goes, since there are currently only two teams in the Eastern Conference with winning records vs. the nine teams with winning records out West, something must be done to get the best possible playoffs.

I get it. I really do. And to some extent, I even agree. Everyone wants the best possible playoff format, and let's be real — no one outside of the fans for the No. 3-8 seeds in the East want to watch ANY of those teams get steamrolled by the Heat and Pacers in the postseason.

But at heart, I am mostly a traditionalist when it comes to sports. I like divisions and conferences and the like, and when people argue that one division or conference is too weak, making it unfair, I like to point out how these things are cyclical. Everything comes back around. For instance, in the early part of the millennium, the NFC East was considered one of, if not the, best conference in the NFL. Now suddenly it's the NFC Least. Likewise, the NFC West was a laughingstock as recently three years ago, when the 7-9 Seattle Seahawks won the division. Now, the West has perhaps the two best teams in the conference in Seattle and San Francisco, while the Cardinals and Rams are both at least respectable squads.

These things are cyclical. And while the Western Conference has reigned supreme for the past decade or so in the NBA, it was the East that ran roughshod over the West for most of the 1990s.

As NBA.com's David Aldridge recently pointed out, there are myriad reasons why the East has fallen on hard times — and none of it has to do with the fact that these teams are in the East. Mainly, the East is filled with the dregs of the league because most of these teams have been run into the ground by incompetent GMs who continually shovel out gobs of money to borderline NBA players. You can't fix team incompetence by realignment or changing the playoff structure. Incompetence is foolproof. Nothing can fix it besides removing it.

So I don't like the idea of abolishing conferences one bit. For starters, it would be a scheduling nightmare to have every team play each opponent in the league roughly the same amount. Cross-country flights are cool for playoff series and brief road trips here and there, but doing it every few nights would be ludicrous. Believe it or not, logistics matter.

Then there is the matter of the conference rivalries that have been built over time — most of which have little to do with divisions and everything to do with playoff battles. While LeBron may think rivalries are dead in this day and age, truthfully they still exist, and they make the league more fun.

Eventually, the East will catch back up, and the playing field will even out. That may not provide much solace to the solid but bubble teams in the West as they watch inferior East squads play in the late spring, but it happens all the time.

However, I do like the idea of getting rid of divisions, mainly because the divisions in the NBA aren't nearly as entrenched and steeped in tradition as in other sports. In a schedule of 82 games, playing the "division" opponents a couple more times than the conference opponents is pretty negligible, and it would be much easier to divvy up those division games to even it out throughout the conference. What difference does it make if the Celtics have to play the Magic instead of the 76ers? Yes, Florida is a good ways further, but it's still just a two-hour flight. Those type of tweaks can work and be implemented rather easily. And it would prevent a team such as the Celtics, currently three games under .500, from getting home-court advantage in the first round. Well, maybe not right now since Boston somehow has the fourth best record in the East at present, but you get what I mean.

Personally, I don't think divisions matter all that much in basketball — or hockey for that matter. With schedules that are so long but don't rely on series the way MLB does, the divisions really don't mean much. Except that currently they do, because the three division winners in each conference automatically get a playoff spot and automatically get home court in the first round. I'd have no problem removing divisions to change that simply as the top eight teams make it in each conference with the seeding based solely on record.

I think it would be good for the NBA, whereas abolishing conferences would not. 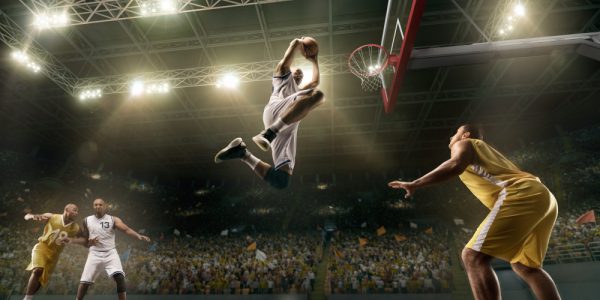 But, just for shits and giggles, let's look at how the NBA playoffs would look as of today — first with how the NBA currently is set up, then without divisions and lastly without conferences. Here goes:

As you can see, the teams don't actually change without divisions — just a couple of the match-ups. Without conferences, all hell breaks loose, as only three Eastern Conference teams make the playoffs. That would be bad for the NBA monetarily, seeing as big markets such as Chicago, Washington and Boston would be left out, while the two New York teams would be pretty much eliminated from even contending for a playoff spot. That would most likely mean less ratings and less interest in the coveted East Coast market, which would hurt.

Truthfully, I think fans are quick to overreact when situations like this arise, where one conference is clearly superior than the other. Like I said, these things are cyclical, and the bad teams become bad teams due to mismanagement, not due to any sort of alignment factors. I'm all for tweaks to make the game better, which is why something subtle like removing divisions makes sense to me.

It can be good for the NBA and for fans, a true win-win all around. But the prospect of losing major markets during the biggest time of the year seems a bit too drastic for me. That's why I say getting rid of divisions in the NBA is good for the league, while getting rid of conferences is not.