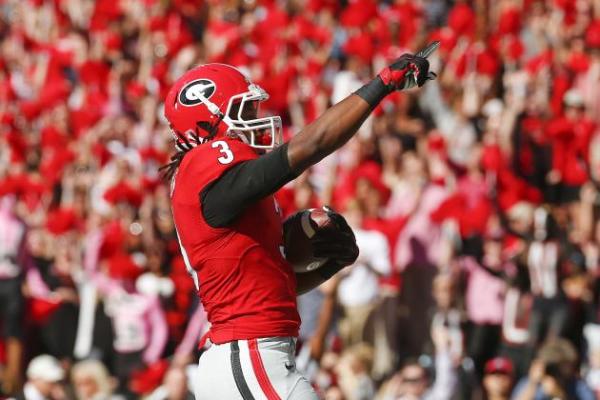 So you may have heard: Georgia Bulldogs junior running back Todd Gurley, the leading Heisman candidate and unquestionably the best running back in the country, has been suspended indefinitely as he is being investigated by the NCAA for alleged NCAA violations.

It seems as though Gurley's crime is allegedly taking money for autographs, memorabilia and/or the use of his likeness. You know, because it's so morally corrupt to make money off your personal belongings and your own name.

This is just another case in a long line of cases in which the NCAA punishes an athlete for something that is perfectly legal for literally every other college student in the world who happens to not play an NCAA-sanctioned sport. And frankly, given the state of the world in which we live, the state of football both in the professional and amateur ranks, and the state of sports as a whole, it may finally be time to put an end to the NCAA as we know it.

The fact that the NCAA is the most hypocritical sports organization in the United States is nothing new. It has been well-known for seemingly forever that when a town hosts NCAA events, the heads of this corrupt organization demand comps and freebies that boggle the mind, particularly for an organization that rakes in the cash and DOESN'T EVEN HAVE TO PAY ITS MAIN EMPLOYEES.

For so long, this was simply taken as the price of doing business. People love collegiate athletics, particularly football and basketball, and if we have to deal with this ridiculous overseer, so be it. But this is not the same landscape as the one in which the NCAA came up.

In today's world, there are no skeletons that can be hidden in the closet. Everything gets exposed sooner or later. There are simply too many watchdogs, whether professional or amateur, taking photos, digging deeper, recording video and dispersing the findings to the public — and the rise of social media has only made secrets more difficult to hide.

Over the past few years alone, we've been exposed to the blatant corruptness of the NCAA time and time again. Whether it was the clear "lack of institutional control" during the University of Miami investigation by the NCAA itself or Mark Emmert's crew far overstepping its bounds in the Jerry Sandusky/Penn State criminal case to everything in between, the NCAA has proved only that it is much more morally corrupt than any institution that affiliates with its organization. It usurps its own rules, fails to follow its own protocols and continues to punish the small fish instead of going after the top dogs.

In reality, the NCAA doesn't give a damn about upholding standards for student-athletes and providing a level playing field. What it cares about is making money off of young men and women without having to pay those young men and women, at least not pay them remotely in proportion to amount of money they bring in for their schools and the NCAA.

However, I'm not here to talk about whether student-athletes should or should not get paid. I'm not even here to say the NCAA is completely useless. What I am saying is that if the NCAA doesn't change its priorities and rules, it may be time to revolt against this absurd organization.

In theory, the NCAA makes sense. There should be a watchdog out there making sure boosters aren't paying college athletes to attend their university of choice, and there should be stipulations in place on recruiting and how invasive coaches can be in a high school athlete's life. In addition, there should be uniform standards to abide by and an agency to make sure those standards are met. All these things make perfect sense.

What doesn't make sense is the fact that the NCAA has rules in place to prevent student-athletes from earning money whatsoever, especially in perfectly legal ways for anyone else. Why in the world can't Todd Gurley — a football player who certainly does not have any time to get a part-time job given that he must balance class, homework, practice, games, travel and some semblance of social life already — sell some autographs or memorabilia? This is America, after all, the land of opportunity and drive for the almighty dollar. What business is it of the NCAA if a player sells his own personal property or not, particularly when the NCAA itself is making money hand over fist off these players?

The NCAA is a fucking joke, and these repeated punishments for seemingly normal things is beyond out of control. But that's the way of the NCAA. It either punishes the helpless or punishes the innocent, all in the name of the almighty dollar.

Now, not only does Georgia take a huge blow to its title hopes and Gurley see his season interrupted for however long, but college football fans across the world are robbed from witnessing one of the best players in the country do what we all want to see him do, whether for a half or a game or 10. All because the guy sold an autograph or two — allegedly.

Frankly, I've had enough. The NCAA is not what it was originally meant to be. It's nothing more than a greedy, corrupt taskmaster, out to prove its dominance over the student-athletes it was created to protect.

Now's as good a time as any to start a revolt, because the NCAA continues to show it has many more morality issues than those it's supposed to oversee.