There has perhaps never been a more discussed nor more interesting third-string quarterback competition in NFL history than the one taking place for the Philadelphia Eagles this preseason.

That’s what happens when a once-heralded recruit out of high school, considered the best at his position in his class, is trying to resurrect his professional football career after seeing his star that was so bright at one of the nation’s top college football programs begin to fade. Oh, that also happens when the other guy in this competition is Tim Tebow.

What, you thought I was talking about the Heisman- and National Championship-winning Florida Gator? You can be forgiven, as Tebowmania is an unstoppable force thanks to all those fawning media types.

Of course, Tebow is the main attraction to outsiders in Chip Kelly’s search for a third signal-caller to back up new starter Sam Bradford and second-stringer Mark Sanchez. But in actuality, it’s that other former heralded high-schooler and collegiate who has the leg up in the competition. Following Philadelphia’s 36-10 drubbing of the Indianapolis Colts in the preseason opener Sunday, Matt Barkley still holds a pretty sizable edge.

Yesterday, Barkley and Tebow played the majority of the contest, with Bradford inactive and Sanchez ending his day after just two possessions, and it was clear that Barkley outperformed Tebow.

This makes sense, seeing as Barkley has had a full year under Kelly to learn the offense, and it showed. For the first time in his professional career, Barkley looked confident and had complete command in the huddle. He made quick decisions, got the ball out swiftly and moved the Eagles’ offense efficiently against a disinterested Indy defense. Yes, he did throw an interception on a batted ball, but overall, Barkley looked like a competent QB who knew exactly what to do with each throw.

This is new, seeing as Barkley has looked like a deer in headlights in the brief NFL game action he’s seen during his previous two seasons in the league.

On Sunday, it was Tebow who looked out of his element. After a very impressive first drive in which Tebow made quick reads and pinpoint throws, he continually held on to the ball too long, failed to decipher the defense, and showcased his penchant to make mistakes instead of just throwing the ball away and living to fight another play. He wasn’t altogether terrible, at times looking good with both his arm and feet, including a rushing touchdown to his credit, but for anyone with eyes, it was clear Tebow is more than a few steps behind Barkley in just about every phase of the offense.

This shouldn’t come as a surprise, despite the struggles of Barkley during his first two NFL seasons. After all, Barkley entered college football with the same type of pedigree as Tebow, and as recently as his junior year, Barkley was touted as potentially the No. 1 pick in the NFL Draft.

Coming out of football factory Mater Dei High School in California, Barkley was the Gatorade National Player of the Year, and ironically following Mark Sanchez’s reign as starter for USC, Barkley became the first true freshman to ever start at quarterback in the opener for the Trojans.

His first three years were stellar, and there was no reason to think Barkley’s decision to return for his senior year would do any harm to his NFL chances. Of course, that didn’t account for Barkley spraining his shoulder and losing arm strength as a result.

USC struggled, Barkley’s stock plummeted and after getting some intrigue at the draft when the Eagles selected him in the fourth round, the world seemed to forget about Matt Barkley. He admittedly did nothing to earn any notoriety in his first two seasons in the league, barely seeing the field. The few times he did, he was awful, tossing three interception and losing a fumble without recording a single touchdown — passing or rushing, to his name.

Barkley’s struggles, coupled with Kelly’s penchant for taking chances, are what led the Eagles to bring Tebow in this season in the first place, and I admit that before the preseason actually started, I thought Tebow had more than a strong chance to overtake what had previously been an impotent Matt Barkley thus far in midnight green.

Yet yesterday, Barkley showcased the type of tools that had him at the top of a whole hell of a lot of draft boards after his junior season to begin with. At 6’2”, he has decent size, and his quick decision-making and strong accuracy — he’s been 60 percent completion percentage every season but his freshman year at USC, when he had a 59.9 percent completion percentage — that NFL coaches love and NFL offenses demand. And he did it in a commanding way, looking like the confidant quarterback he was in college as he enters his third professional season.

Yesterday, he showed why. Ultimately, it may not mean anything. It’s not as if Barkley, off the strength of one preseason game, is going to thrust himself into a starting-caliber QB or even a second-stringer. The allure of Tim Tebow, who has had NFL success despite his obvious flaws, may prove to be too much for Chip Kelly to ignore.

But it is clear that at this point, Matt Barkley is the better fit for the Philadelphia Eagles for a position they hope they won’t need to utilize at all this season. So go ahead and keeping showing the Tim Tebow highlights while completely ignoring Matt Barkley, ESPN. He doesn’t care. He’s just going to keep going out there and showcasing that Tim Tebow isn’t the only heralded collegiate QB fighting for his NFL life. 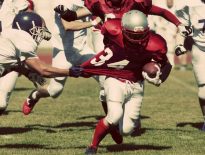