Right now, it's safe to say there's no love lost between NFL fans and Commissioner Roger Goodell. Everything came to an apex on Monday night, when the replacement referees — who were already drawing ire thanks to being thrown into the biggest stage in the world, a stage they were in no way prepared for — quite literally affected the outcome of a game, snatching victory from the Green Bay Packers and handing it on over to Golden Tate and the Seattle Seahawks.

It got me thinking … is there a commissioner in the big four professional sports in America that is actually adored by fans? The short answer is no. The long answer is that it's lonely at the top for pro sports commissioners.

Let's take a look at the four major sports commissioners and break down their most infamous moments.

Roger Goodell, NFL
We'll begin right where we left off. Ever since he took over for Paul Tagliabue in the summer of 2006, Goodell has put himself out there as a strong disciplinarian with the intention of becoming a staple of NFL discussions. At least, that's what it seems.

Right from the get-go, Goodell came across as power hungry, and being the top dog of the biggest sports league in America has only made his head swell bigger and bigger. He came in, guns a blazing, dropping the hammer with suspensions and fines for player conduct on and off the field. He banned Adam Pacman Jones. He levied fine after fine on hits once deemed legal. And all the while, his ego grew.

Next thing you know, he was talking out of two sides of his mouth, proclaiming the NFL cares first and foremost about player safety as the concussion epidemic spread — along with impending lawsuits — while at the same time pushing for an 18-game schedule and profiting off the league's violence.

Before long, it was plain to see Goodell cared only about his own bottom line and the interests of the owners — fans and players be damned. Next thing you know, Goodell became judge, jury and executioner in the league, the man in charge of making the rulings, handing out discipline … and mind-numbingly being the arbitrator on appeals. As such, he railroaded the New Orleans Saints for bounty gate, failed to release the supposed evidence and began to really lose fans.

Then, somehow, he and his owner cohorts refused to negotiate with the league referees, replacing them with high school, junior college and Division II and III referees, most of whom have absolutely no idea the rules of the NFL. It's resulted in anarchy on the field and distress off it. Games are painful to watch as the replacement refs, who were put in a no-win, unfair situation, stumble through the games. Monday night just made it all the more apparent that this thing has gone too far.

All the while, Goodell has gone silent, doing nothing but backing his joke of a decision to put players in harm's way with unqualified officials, all while detracting from the game for fans.

Roger Goodell may be the most despised man in sports right now. He's also the leader of the most profitable league in America, a league that is thriving financially no matter how much we gripe. I'm sure he's sleeping OK on his pile of money at night, even if the fans and players cannot stand him any longer. 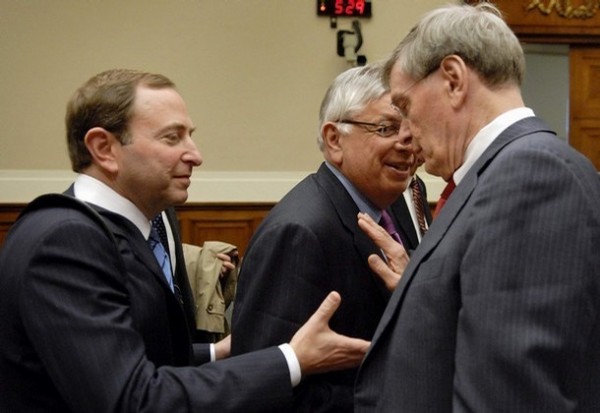 That brings us to Gary Bettman, the commissioner who usually draws the most ire. Under his watch, the NHL already had a season wiped out, and now the owners have locked out the players once again, putting the 2012-13 NHL season in jeopardy. And he's allowed this all to happen right as the NHL was starting to thrive again with excellent ratings, the backing of NBC and some marketable stars.

Then, boom, just like that, the momentum has been halted. Players are taking swipes at Bettman and the owners. Fans are once again grabbing their torches and pitchforks, ready to storm the castle and give Bettman what's coming to him.

If it wasn't for these replacement referees, even with bounty gate and a seemingly out of control ego, Goodell wouldn't even be able to touch Bettman in the hate department. One work stoppage is bad. Two is terrible. Yet here we are, with a second lockout in less than a decade, with teams crying poor yet still handing out long, hefty contracts a la Nashville and Shea Weber.

All this has happened on Bettman's watch.


David Stern, NBA
For the majority of his tenure, David Stern has actually been regarded very highly by the fans. He helped turn the NBA from a somewhat fledgling league into a powerhouse, with the help of superstars such as Magic Johnson, Larry Bird and Michael Jordan. Sure, he had a bump with the 1998-99 lockout, but the season wasn't lost, just abbreviated, and fans seemed to generally look past it.

But in recent years, Stern has turned into something of an evil genius. First, he instituted a dress code for players, taking away the freedom of expression and "putting players in their place." He also helped morph the game into one of hate between rivals to a buddy-buddy game, where everyone is friends with everyone else, so much so that they're willing to team up with their rivals instead of overthrowing them.

And then of course there was the whole New Orleans Hornets trade debacle, with the NBA taking over the team only to have Stern veto a seemingly reasonable trade that would have sent Chris Paul to the Lakers. He lost a lot of the credibility he spent decades building with that, and it only got worse with last season's lockout.

Now Stern is viewed with skeptical eyes. On his watch, yes, the league has thrived. It has also gotten several black eyes, from the thuggish behavior of some players, to the "white-washing" of the league, to the whole high school/college conundrum, to draft lottery conspiracies, to the Tim Donaghy referee scandal.

For as much as Stern has done in his tenure, he'll always be remembered most for the Knicks winning the lottery to draft Patrick Ewing (the frozen envelope) and that vetoed Chris Paul trade, for better or worse. But Stern seems to embrace the controversy and enjoys being the lone man on top, so good for him.

Bud Selig, MLB
Right now, Selig may actually be the most likable professional sports commissioner in America, and that's saying something.

As it currently stands, baseball is doing just fine, and the addition of two more wild card spots has kept more teams in the race. But just the thought that Selig may be the lesser of four evils is mind-boggling given what has happened on his watch.

All the while, Selig has come across as kind of a bumbling fool, a man who is in over his head. Saying he's a likable commissioner is going a bit far. But as it stands, he may be the most likable of the lot as it stands right now.

Who would have ever guessed that? Certainly not me.

One thing is clear, though: It's lonely at the top, even in professional sports.

3 Replies to “For Pro Sports Commissioners, It's Lonely At The Top”