There are few football players more underappreciated on the defensive side of the ball than the 3-4 defensive lineman, particularly 3-4 defensive ends. You hear about the traditional 4-3 defensive ends who wreak havoc on quarterbacks and the tackles who dominate like the Suhs and Sapps of the world.

But in the 3-4, the glory position is clearly outside linebacker, the hyped pass-rusher types a la Clay Matthews, DeMarcus Ware, et al. Hell, even the nose tackles get some love like Vince Wilfork and Haloti Ngata have over the years. But you rarely hear much, if at all, about the 3-4 defensive end.

Well, you rarely did until the past two weeks watching the Philadelphia Eagles. On national television the past two weeks, first against the Dallas Cowboys on Thanksgiving Day and then Sunday in FOX's National Game of the Week vs. the defending Super Bowl champs, Eagles 3-4 defensive end Fletcher Cox put on a show.

It began down in Dallas, where Cox said he and his defensive teammates knew they would dominate the line of scrimmage against the Cowboys' heralded offensive line … and then went out and did just that, led by none other than Cox himself. The man moved offensive linemen at will, driving his coutnerparts back into Tony Romo and eating the quarterback and all running backs alive. The most recent "best back in the NFL," DeMarco Murray, was held to just 73 yards on 20 carries thanks in large part to Cox, just the second time all season Murray failed to eclipse the 100-yard mark. Cox also tallied a sack against Romo and made life a living hell for the Dallas offense.

He was perhaps the most dominate player on the field defensively on Turkey Day, and he proved Sunday that his performance wasn't just some fluke. 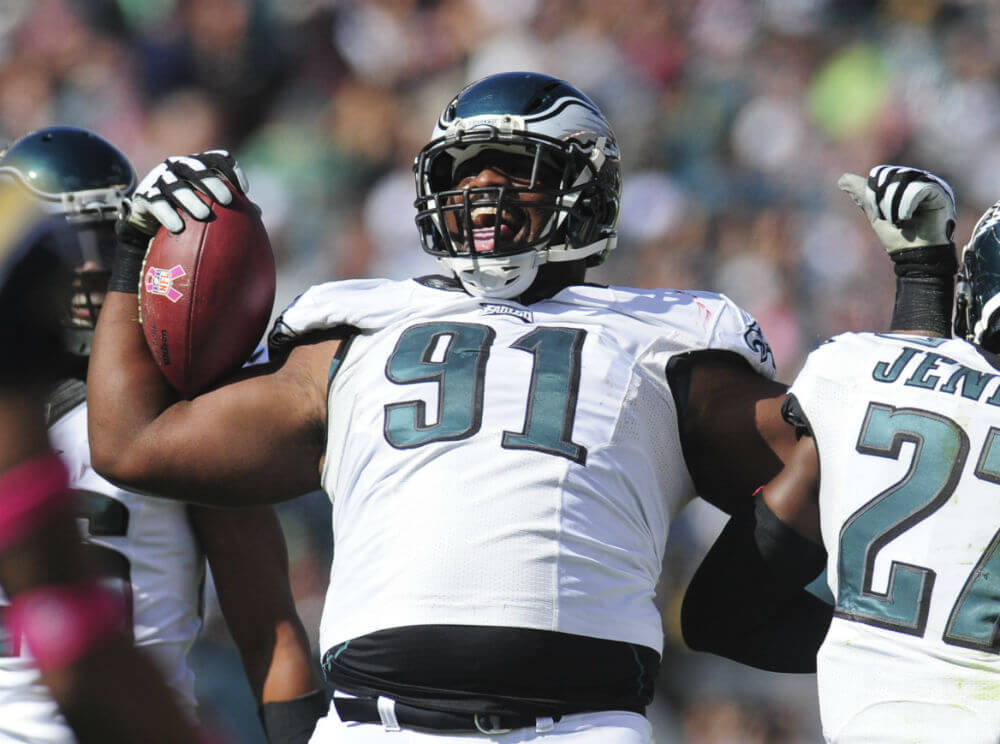 Even in defeat, the Eagles' 2012 first-round pick out of Mississippi St. was a terror, routinely stuffing Marshawn Lynch and the Seattle rushing attack and often creating pressure on Wilson. In a game that saw the Seahawks' defense dominate and the Eagles' secondary struggle at times, Cox was again the most impressive Eagle on the field for a second straight week in a row.

For those of us who watch Philadelphia on a weekly basis, this is nothing new. Cox showed many great signs as a rookie and really developed into an anchor last year. This season, he's played at a Pro Bowl level, even though his numbers don't necessary reflect that. The 3-4 is not designed to help defensive ends put up numbers — it's designed to free up the linebackers to make plays. Cox has done that and more, creating big plays all by himself.

Take, for instance, the play he made in the second quarter Sunday. On a 2nd-and-10, Cox dominated his man, throwing him like a rag doll, and took down Robert Turbin for a one-yard loss. On the very next play, Russell Wilson was called for an intentional grounding, forcing the Seahawks to punt. It's the type of play that Cox has made routine this season, and he does so much more to free up his teammates with his presence. It's no coincidence that Connor Barwin is having a fantastic year as Cox turns into the most important player in Philadelphia's front seven.

With the bright lights of the national audience upon him, Fletcher Cox rose to the occasion and proved that a 3-4 defensive end really can shine. Whether he's making tackles or allowing others to do so, this is what Flethcer Cox does on a weekly basis.