I have a confession to make: despite being a graduate of a Big Ten school, I hate Big Ten basketball. Like really, really hate it. A lot.

My favorite teams growing up have always been Temple first and North Carolina second, thanks in part to my love for Michael Jordan and completely sealed by my love for Philadelphia native, Rasheed Wallace. Penn State was an afterthought. Something about the Big Ten style of play just rubbed me the wrong way, and watching Wisconsin and Michigan State play a 22-21 first half brought all those feelings back.

However, there have been several players from the Big Ten that I really enjoyed watching, both in college and beyond. So here are five of most entertaining Big Ten ballers I've ever seen, minus members of the Fab Five, since they get so much love already.

Bobby Jackson, Minnesota
Bobby Jackson is best known for being the defensive-minded sixth man of the Chris Webber/Mike Bibby/Peja Stojakovic Sacramento Kings that were always entertaining but could never quite get over the hump. What people may forget is that Jackson was a stud at Minnesota as a community college transfer.

Jackson improbably led the Golden Gophers to a Big Ten title (which was eventually forfeited due to NCAA violations) and a Final Four by being a force on both ends of the floor. He always seemed to be going full speed on offense and defense, scoring at will, getting to the bucket and locking down opponents - and his high socks just added to his entertaining play. Bobby Jackson was definitely no joke.

Jason Richardson, Michigan State
It's true that the 2000 National Champion Michigan State Spartans were Mateen Cleaves' team and that Morris Peterson and Charlie Bell were major contributors. But it was Jason Richardson who brought the excitement factor to Tom Izzo's squad.

Clearly, the NBA took notice, as J-Rich was the fifth overall pick in the draft and kept up his exciting acrobatics at the highest level. I had the pleasure of seeing Jason Richardson win the dunk contest here in Philadelphia, and it just confirmed my admiration for his play in Lansing. 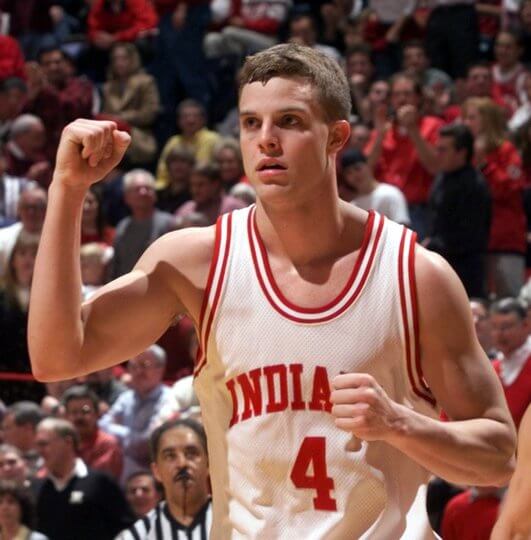 Luke Recker, Indiana/Iowa
I have a weakness for players who are unconscious gunners that actually are great at shooting. Luke Recker was, without a doubt, one of them. A McDonald's All-American and Indiana's Mr. Basketball, Recker naturally went to Indiana and shined from the get-go. As a freshman, he averaged 13 points and led the team in steals, following that up with a sophomore season averaging 16 a game and becoming a household name.

But Recker felt out of place in Bob Knight's offense and decided to transfer to Arizona. That's when disaster struck:

... just weeks before he was to go to Arizona, Recker was in Colorado with his high school sweetheart, Kelly Craig, and her family. One night, on the way home from a carnival, the car Recker and Craig were riding in was struck head-on by a drunk driver in a pick-up (he also side-swiped the pick-up in front of them, which was carrying 11 people, nine in the bed of the truck.) All told, 14 people were seriously injured and one died. Recker almost lost his left ear, sliced his temporal artery, had a gash running from his ear and along his jaw down to his neck, and he crushed his left wrist and thumb. He needed more than 200 stitches to close him up, and would probably have ended up bleeding out had a nurse not happened to drive by minutes after the accident.

Recker never played for Arizona, eventually transferring to Iowa, where he continued his career as a lethal scorer, but one who battled injury. Still, watching Recker hoist it up and play a run-and-gun style was a thing of beauty, and I'll always wonder what could have been for him. Regardless, I loved watching Luke Recker play.

Brandon Watkins, Penn State
Even though Penn State basketball was never at the forefront for me, I still followed my alma mater growing up, and I'd be remiss if I didn't include a Nittany Lion on this list. For me, there was no more entertaining Penn Stater on the hardwood than Watkins.

While Watkins never put up overly gaudy stats on an absolutely dreadful Penn State team, he was a lightning-quick, score-first guard who always made things exciting on the court. He was pretty much the lone reason to watch some very unwatchable Penn State teams near the turn of the century. It probably helps that I actually got to play with and against Watkins at the IM Building my freshman year of college, which was Watkins' senior year. Needless to say, he dominated the competition the few times I saw him there.

Luther Head, Illinois
Here's another confession: I hated the Illinois team that lost to UNC in the NCAA title game, particularly Dee Brown and Deron Williams. I saw them absolutely destroy a pathetic Penn State squad at the Bryce Jordan Center, and I saw them cost me an NCAA Tournament bracket victory by edging out Salim Stoudamire's Arizona Wildcats. And I hated them for it.

However, I didn't hate the third guard in Illinois' three-headed guard monster. In fact, I loved watching Luther Head. Where Williams was the best player and Brown the most electric, Head was the heart and soul. He was the guy unafraid of the big moment, the guy who wanted to take the big shot, the guy who backed down from no one. And his fearlessness and scoring ability helped him get to the NBA and the Illini to the NCAA title game.

So there you have it. Even though I typically loathe Big Ten basketball, I can find beauty in the game. Who are your favorites from the Big Ten?