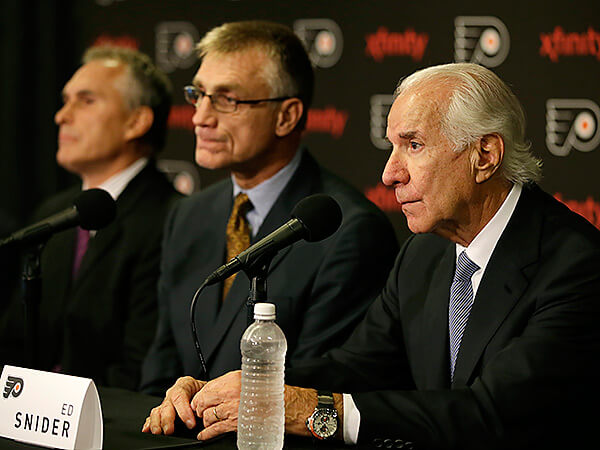 As any hockey fan knows by now, the Philadelphia Flyers fired their head coach, Peter Laviolette, yesterday morning, just three games into the 2013-14 campaign. After a pathetic 0-3 start in which the Flyers really only played one strong period of hockey, Philadelphia GM Paul Holmgren and owner Ed Snider had seen enough.

Now, I'm not here to talk about whether or not firing Peter Laviolette this season was the right or wrong move. Truth be told, I've been as critical of Laviolette as anyone the past few years, tiring of his teams' recurring problems during his tenure. Frankly, given the way this organization has had a steady stream of diminishing returns, Laviolette's days were numbered to begin with. Hell, he was the odds-on favorite to be the first NHL coach fired this season. And while the timing is absurd, it very well may prove to be the right move.

That doesn't mean the Flyers are headed in the right direction. In all actuality, I don't think the Flyers have any idea what direction they're going in, and that was proved when the team traded away its two most prominent players just one year removed from those same players helping lead the Flyers to the Stanley Cup Final. With the demanding Ed Snider in charge, the Flyers are always in win-now mode … except for the fact that their personnel moves have been a display of hypocrisy. Or as I call it, "Be Patient and Win: The Flyers' Contradictory Philosophy."

Without a doubt, the decision to first retain and then fire Peter Laviolette is in keeping with this theme, and it's all been the work of Ed Snider. Flyers fans already know Paul Holmgren is hamstrung by the word from Snider — and also that Holmgren is a disaster with the cap. But given that his days are surely numbered with Flyers legend and current assistant GM Ron Hextall ready to move in seamlessly (possibly any day now), there's no need to talk a whole lot more about Paul Holmgren either. I've already said plenty about him in the past, and most of it is not too favorable.

However, when it all boils down to it, the one man who has been most integral in this devolution since 2010 is the "Chairman of the Board," none other than Snider himself.

The sports world has seen its share of hands-on owners — Jerry Jones, Dan Snyder, George Steinbrenner — but none has been more absurd and reactionary than Ed Snider the past few years. And that's not a good thing, not at all, given that Snider is going the way of NFL Hall of Famer and infamous Oakland Raiders owner Al Davis.

In the early days, much like Davis, Snider built hockey in Philadelphia, and before long he built a winner. Back-to-back Stanley Cups made Snider a legend in the City of Brotherly Love in the same way Super Bowls and sustained excellence defined Al Davis's "Just Win, Baby" Raiders. The two were legends who just kept on winning and winning. Even when the championships vanished, these two owners continued to assemble competitive teams more often than not.

But then Father Time caught with Davis, and the game passed him by. Still the demanding tyrant, he held back the Raiders and watched them devolve into a laughingstock. His moves proved mostly outdated, his decisions making it glaringly obvious that his best days were well behind him.

That's where Ed Snider is now, in the phase where his legend is fading as the game passes him by. After the first lockout of the millennium, the Flyers were one of the last teams to move away from the plodding, physical players that Snider loved so much and road to two Broad Street Bullies Cups, as he refused to relinquish what had succeeded in the past — new rules be damned. Then, when he finally realized this was a new league with a new style, he couldn't resist making a splash just for the sake of making a splash. All it's done is create cap problems and roster issues once the once cap-less league instituted a salary cap.

It was Snider who demanded Holmgren sign Ilya Bryzgalov, which can be considered nothing short of an unmitigated disaster. It was Snider who signed off on shipping away the makeup of the franchise not once but twice under Laviolette's tenure, handing him new rosters and new goalies and new dynamics on nearly a yearly basis. And it's Snider who is becoming more and more adversarial — though he's always been combative — as age creeps on him and reporters hound him.

Firing Peter Laviolette yesterday isn't a problem in and of itself, and admirably, Snider really does want nothing more than to win another Stanley Cup. He's never been shy about spending money. And he's never been shy about demanding how his money be spent. As the game changes and time passes him by, that's where the real problem lies.

Ed Snider has been a great owner, a passionate owner. But now he's an intrusive, outdated owner. Ed Snider has gone the way of Al Davis … and that's not a compliment at this stage in his life.

2 Replies to “Philly's Most Unwanted: Ed Snider Is Going The Way Of Al Davis”