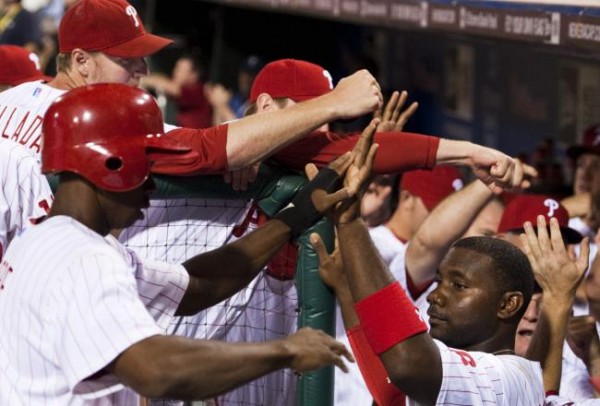 A few weeks ago, I was jokingly telling my friends that all the Philadelphia Phillies had to do was sweep the Nationals and sweep the Braves heading into September and they'd be right back in the thick of things for one of the National League Wild Card spots.

Of course, I said this all in jest, as the Phillies were a good way back from the pack with several teams ahead of them; then a funny thing happened. The Phillies did sweep the Nationals. And they damn near swept the Braves if it wasn't for Chipper Jones defying Father Time.

Since then, all the Phillies have done is win time and time again. Starting with the game before that Braves series to close out August and usher in September, the Phillies are 10-2 in their last 12 games. They took two of three against Atlanta, two of three against the NL Central-leading Cincinnati Reds and then swept the Rockies over the weekend. And now the Phils are a victory away from sweeping the Marlins.

Suddenly, the team that finished with the best record in baseball a season ago has leapfrogged the pack and now has just two teams and a handful of games separating the Phillies from the St. Louis Cardinals, the team that disposed of the favored Phillies a year ago in the first round en route to winning the World Series.

Clearly, Philadelphia has not forgotten that. In fact, it seems as though the Phillies are taking a page out of the St. Louis playbook and hoping for similar results. Lest we forget, the defending World Series champions were behind double-digit games of the NL Wild Card as late as August before going on a tear and sneaking in.

Now, the Phillies still have a long way to go. A season of underachievement and injuries turned one of the favorites into a walking disaster. Cliff Lee couldn't buy a win. Chase Utley and Ryan Howard were shelved. Roy Halladay didn't look like Doc. Shane Victorino and Hunter Pence were shipped off. Placido Polanco couldn't stay healthy. The bullpen, save for the new, expensive closer Jonathan Papelbon, was putrid. Only Carlos Ruiz and Cole Hamels seemed to be holding up their end of the bargain.

Then the Phillies got Howard and Utley back, and the offense slowly started to come around. Domonic Brown was called up to join a platoon of outfielders, including John Mayberry, Nate Schierholtz, Juan Pierre and Laynce Nix, and the platoon seems to be working just fine, with each guy taking advantage of his opportunities.

But the biggest jolt came from surprisingly effective call-ups. When Ruiz, the lone bright spot this season for the regulars, went down with a foot problem, it looked as though the lost season was only going to spiral even more out of control. Only 32-year-old rookie Erik Kratz had other ideas. He, along with 30-year-old Kevin Frandsen, was called up and has done nothing but take advantage of this opportunity he's been waiting for. Kratz and Frandsen have pounded the baseball to help ignite the offense and steady the lineup, while Howard and Utley began to return to form.

With Kratz and Frandsen excelling and the Phils giving more young guys a chance as well, the team has suddenly turned it on. Youngster Tyler Cloyd is this year's Vance Worley. Call-ups and acquisitions such as Jeremy Horst, Phillippe Aumont and Josh Lindblom have helped stabilize the formerly laughable bullpen.

It's become a snowball effect, with the pitching staff finally starting to live up to its billing. Hamels has continued his dominance. Doc is returning to form. Lee is no longer trying to be perfect. And Kyle Kendrick has suddenly looked more like Roy Halladay than Halladay has himself. And now with Ruiz back and almost everyone healthy, things are finally clicking.

It's all resulted in a run that has to have the rest of the National League terrified, even with the chances of Philadelphia making the playoffs still pretty thin. The Phillies still have a long way to go, and the odds are against them. More than likely, this late surge will end up being too little too late.

But if they keep it up and somehow sneak in the way the Cardinals did last season, there isn't a team in baseball that would look forward to facing Halladay, Hamels, Lee, Howard, Utley, Rollins and company in October, particularly with the blueprint St. Louis laid out last season.