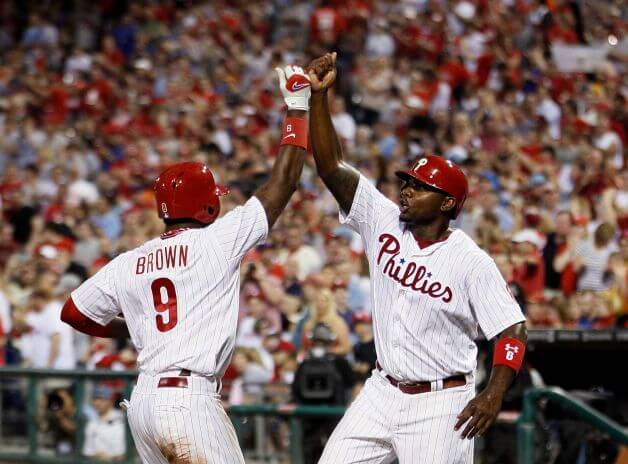 Anyone paying even a little bit of attention to baseball the past few weeks know that Philadelphia Phillies leftfielder Domonic Brown is the hottest hitter in Major League Baseball this side of Miguel Cabrera. And he has the accolades to prove it, earning the National League Player of the Month for May by hitting .303 with 12 home runs and 25 RBIs … and it was just the tip of the iceberg.

Brown's assault on MLB pitching has continued, as he's started off June by going 7-for-16 with two home runs, six RBI and four runs scored in just four games. It's been a meteoric and unprecedented rise. For starters, Dom joins this list of players 25 or younger to have a 12-home run month in the last 20 years: Ken Griffey Jr., Alex Rodriguez, Vladimir Guerrero, Adam Dunn, Albert Pujols, Adrian Beltre, Mark Teixeira, Prince Fielder, Troy Tulowitzki, Jay Bruce, Mike Stanton and Justin Upton — all of whom developed into all-star power hitters.

In May, he also became just the sixth player 25 or younger ever to hit 12 home runs within his first 108 plate appearances, joining some guys named Babe Ruth, A-Rod, Eric Davis, Boog Powell and Frank Howard.

In the span of a month, Brown went from a guy hitting well under .250 to approaching .300 and now leading the NL in home runs. His remarkable hot streak has people across the nation taking notice, and has Phillies fans like me and my friends sending texts to each other with each remarkable feat:

I love Dom Brown and Cliff Lee. And no other Phillies

Are you shitting me? He's ridiculous

That bat flip and trip to first base was sweet by the way. That's a confident kid.

I love that guy.

We quite literally cannot contain ourselves. Suddenly Domonic Brown is not just a young player on the rise … he's must-watch TV. 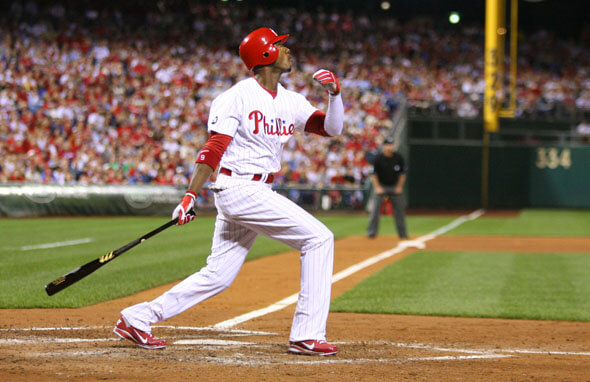 For those of you from outside the Philadelphia region, this may just seem like a younger player beginning to come into his own, but that's not the whole story. For Phillies fans, this is a journey that can only be described as a wicked roller-coaster. To truly appreciate what Domonic Brown is doing — no matter how unsustainable or how remarkable it is is — you need to understand Brown's journey from highly touted prospect to injury-plagued bust to suddenly a surefire all-star.

You see, with the Philadelphia Phillies going on the greatest stretch in franchise history from 2007 until last year's fall from grace, the team became a smaller version of the New York Yankees, making loud splashes through free agency and trades, depleting their farm system to get the all-stars competing teams need. The one untouchable piece during that time was Domonic Brown, the lone savior in a depleted Philadelphia farm system thanks to trades for Cliff Lee, Roy Halladay, Roy Oswalt, Hunter Pence and more.

As fans, we were led to believe Brown was, if not a destined to be a Hall of Famer, certainly destined to take the reins from Chase Utley and Ryan Howard as the next face of the franchise. Shit, Brown was so untouchable that Phillies GM Ruben Amaro refused to include him in trades for Cy Young aces Lee and Halladay.

But after getting a cup of coffee in the Majors with little to show for it production-wise, the shine wore off of Brown. His name did begin to crop up as an attainable asset … particularly when he Phillies hoped he'd take a starting spot from Ben Francisco and couldn't … then take a starting spot last season but couldn't. Injuries plagued him, he was yo-yo'ed back and forth from the big club to the minors, and for the first time in his life, Brown really began to struggle.

All the while, there was debate among the Philadelphia Phillies fans about Brown, with many proclaiming him as nothing more than an overhyped bust, this despite never really getting a chance to play out a season before this year. The more people saw his numbers and defensive miscues, the more ridicule he got. Without even getting to a season's worth of at-bats, Brown was labeled a bust by a large contingent of fans.

For a portion of us, particularly blogging godfather and founder of TheFightins.com Mike Meech, we believed Brown could be a productive player in the league. But that was getting harder and harder to believe, even if Brown wasn't terrible. Still, he wasn't setting the world on fire either. Yet, his tantalizing arm, beautiful swing and mature approach at the plate showed the talent was still there.

And after gradually becoming the hitter with the best at-bats on a struggling Phillies team, it happened. Brown, gaining confidence now that he is healthy and playing and has no reason to look over his shoulder, started to attack the strike zone. Whereas he had shown pretty good plate discipline prior to May, he suddenly started to feel like he could hit anything. And he has. At an alarming rate.

Now Brown is smoking the ball with regularity, and pitchers seemed baffled on how to handle him. Truth be told, he doesn't look like a young Barry Bonds as some have proclaimed, because Bonds was a walking machine. Brown did not have a single walk in the month of May, which is mind-boggling.

No, what Brown looks like right now is a young, left-handed version of Vladimir Guerrero — a violent swinger attacking the ball without regard for walks … and destroying the baseball in the process. He even has a similar game and frame to a young Vlad, albeit more slender. He has speed like a young Vlad, a cannon for an arm like a young Vlad, and now, suddenly, he is displaying the raw power and aggressive hitting that a young Vlad showcased north of the border.

For those of you who don't remember what watching a young Vlad was like, let me just tell you it was electrifying. Now you have the chance to see just that with Domonic Brown, and it's impossible not to be captivated.

I tweeted this Monday night and I mean it 100 percent:

I don't care that game 7 is on, that Stanley Cup playoffs are on, that my kitchen is on fire ... When Dom brown is up that's all I'm watchin

When Domonic Brown is up, it doesn't matter what else is going on. I'm not leaving my seat until his at-bat is over, because if I do, I might miss something so electrifying and awe-inspiring that I'd be kicking myself for days.

For us Phillies fans, it's just about all we have nowadays. Well, him and Clifton Phifer Lee. He's giving us reason to watch, even with a team struggling just to reach .500, and he's giving baseball fans everywhere reason to take notice. In fact, he now leads all MLB outfielders in home runs and RBI, and is quickly gaining on the pack in OPS.

Domonic Brown has finally gotten healthy and gotten his true chance at the MLB level, and now Domonic Brown is suddenly must-see TV.