No professional sports league on the planet spreads the Christmas cheer quite like the NBA. Every year, the best of the basketball world is put on display for the masses while they open up presents, gather with family, and kick back by the tree and fireplace.

This year was no different, even if the Twitter-sphere was sidetracked by the stupidest of possible human interactions, a Twitter beef between a known provocateur and a moronic individual willing to physically fight over social-media exchanges. The sophomoric folks out there may be drawn to that "Housewives-esque" drama, but for those of us with functioning brains and a real interest in actual basketball games, there was plenty to take in yesterday.

With the annual NBA quintuple header filling us with yuletide cheer, here are the five things the world learned and/or reaffirmed about the NBA on Christmas day.

Quick: Who leads the Eastern Conference in assists, steals and spectacular plays? That'd be Washington Wizards point guard John Wall, who trails only Rajon Rondo in assists, averaging 10.5 a game, to go along with a conference-leading 2.1 pilfers per contest.

More importantly, Wall has his Wizards playing some of the best basketball in the entire Association so far this season, and he's doing it in every way imaginable. Yesterday's Christmas Day performance was exhibit A.

In Washington's 102-91 easy victory against the lowly New York Knicks, Wall was head and shoulders above anyone else on the court. His 24 points on 10-17 from the floor, 11 assists, six rebounds and one steal were indicative of how awesome he truly was … and is. With Wall running the show, five of his teammates also put up double figures — Nene, Marcin Gortat, Bradley Beal, Kris Humphries and Rasual Butler — and the Wizards shot an outstanding 51.2 percent from the field. He made shots. He set up teammates. He orchestrated a beatdown. Oh, and he also did this:

Once upon a time, the Oklahoma City Thunder looked to be dead in the water. Beginning the season without Kevin Durant and then losing Russell Westbrook in the second game of the season put the perennial contenders in a major hole. Then Russ and KD came back, OKC began to ball out … and KD went and got hurt again. Given the hole this team had already dug itself in its two stars' absence, things looked grim.

Only Russell Westbrook simply wasn't having it. On the night KD got hurt, a tough loss at the Warriors, Russ was magnificent, keeping OKC in the contest to the very end.

Yesterday, against the defending NBA champions, Russ done did it again: 34 points, 11 assists, five rebounds, five steals and an attitude that propelled the Thunder to the 114-106 victory over the San Antonio Spurs. With no Durant — and no Kawhi Leonard — Westbrook took over the game.

If you're paying attention, you'll notice he's also taken over the entire league.

Yes, the Thunder is currently two games under .500 and on the outside looking in for the crowded Western Conference playoff picture. But Westbrook is singlehandedly keeping OKC within striking distance, now just two games back from the eighth spot. With where the Thunder was due to his and Durant's absence, that's remarkable. And with KD sure to be back before too long, things are only looking up for OKC.

It's all thanks to Russ. Not only is he leading the entire NBA in scoring at 28.6 points per game, but he's doing it in an efficient manner. Need proof? He has the highest PER in the NBA at staggering 33.29 — higher than Anthony Davis, higher than Stephen Curry, higher than James Harden and Chris Paul and LeBron James and everyone else. On top of that, Westbrook is shooting at a career-high 46.6 percent clip, averaging 7.4 assists per night, 5.8 boards and is second in the NBA with 2.2 steals a game.

Given OKC's record as it currently stands, Russell Westbrook probably isn't the prohibitive favorite in the MVP race. But if the Thunder rally and make the playoffs despite so much time missed from the superstars, there will be no better choice than Russ for MVP.

We all remember Dwyane Wade leading the Heat to its first NBA title with Shaq and the incredible talent he had become. Problem is, due to injury and the necessity to take a back seat to LeBron James the past four years, we haven't seen that same Wade in quite some time.

On a lesser scale, we can say the same thing about Luol Deng. Always anonymous for his true dirty work, Deng for years was the heart and soul of the Chicago Bulls. A Tom Thibodeau favorite, Deng always D'd up the opposition's best scorer and did it well. He also happened to make shots, create space, and help Derrick Rose and the Bulls flourish with his unselfish and unheralded play. Then injuries began to slow him down, he was shipped to hopeless Cleveland and Luol Deng as we knew him ceased to exist.

Well, with LeBron taking his talents back to South Beach, this time in a visitor's uniform, on Christmas, Wade and Deng turned back the clock.

Despite some struggles from the field, Wade was active and explosive in a way we have not seen regularly in years. His game-leading 31 points to go along with five rebounds, five assists, two steals and a block were vintage Wade. And his putback slam was something I'm not sure any of us knew Dwyane still had in him.

While Wade's performance was a throwback showing, it was not entirely surprising. After all, Wade is in top 10 in the NBA in scoring, putting up 23.2 a night and keeping the Heat in playoff position.

Luol Deng's performance, on the other hand, was more than a vintage performance — it was the reason the Heat was able to topple the Cleveland Cavaliers 101-91.

To compliment Wade's 31, Deng netted 25 points of his own, but he did so much more than score. He made the game's best player work his tail off to get his 30 points, and then made him work even harder on the other end. Deng added eight rebounds and eight assists to his 25 points, flirting with a triple-double that arguably would have been the most surprising triple-double of the season. It was a performance like this that reminded us why, exactly, Tom Thibodeau loved Deng as a player.

Speaking of Tom Thibodeau, to me, there is no better coach in the NBA. That is not to say Thibs is better than guys like Gregg Popovich or Rick Carlisle, but no coach in the NBA does more with less than Chicago's head man.

We all saw what Thibodeau could do with a healthy Derrick Rose. The Chicago Bulls became a powerhouse in the Eastern Conference, the only true contender to the Boston Celtics' Big Three and the LeBron ascension. Since, Rose has been in and out — mostly out — of the lineup, and it still doesn't matter. The Bulls are always right there at the top of the East, always a dangerous team that locks opponents down and grinds out victories. Moreover, this is a team that gets every ounce of talent out of its players — OK, Carlos Boozer excluded — each and every season. That's because Tom Thibodeau is as beautiful a basketball mind as there is. 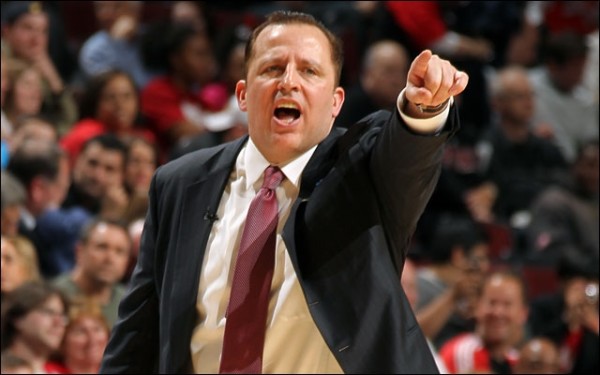 This season, with more depth than ever and Rose slowly but surely looking healthy and resembling every bit of that MVP he once was, the Bulls very well may be the most dangerous team no one is really focusing on. Though after yesterday's 113-93 rout of the Kobe-less Los Angeles Lakers, the way this team plays opened more than a few eyes I'm sure.

Pau Gasol, after struggling the past few years in Los Angeles, is back to his all-star form, teaming with Joakim Noah as the best 1-2 frontcourt combo in the league. Noah is a legit all-star and Defensive Player of the Year candidate, the type of player any team would kill for. And Jimmy Butler, under Thibodeau's guidance, is emerging as a star. In fact, with Paul George out, Butler is developing into Chicago's own version of Indiana's MVP.

No one saw that coming, but Thibs made it possible. Add an effective, deep bench to an already talented Chicago team that now is incorporating a healthy Derrick Rose, and you have yourself a full team for the first time in a long time for Thibodeau to work with. That's a frightening thought given all Tom Thibodeau has done with handcuffed rosters over the years. If I had a vote, I'd vote Tom Thibodeau as my coach of the decade — you know, if that award existed.

There was no game I was looking forward to more on Christmas than the battle between the Golden State Warriors and Los Angeles Clippers. These are two of the deepest, most fun teams in basketball, and furthermore, they are beginning to develop a rivalry.

I was expecting a tight contest, one in which the big guns would put on a show: Steph, CP3, Klay, Blake, Iggy, DeAndre. Instead, it was perennial sixth man Jamal Crawford who stole the show.

Crawford had a game-high 24 points off the bench, leading the Clippers to the 100-86 victory, creating the type of instant offense he's become known for over his career. The reigning Sixth Man of the Year — his second time taking home the award — is perhaps the greatest bench scorer of his generation. Whether it was in Chicago, New York, Oakland, Atlanta, Portland or now in LA, Crawford has scored and scored and scored some more. Sometimes, he'd do it efficiently, other times not so much, which is why he's never been the consistent starter a man with his offensive talents could be. But he's been as valuable a contributor as any non-superstar during his nearly decade and a half in the NBA.

The thing about Jamal Crawford is that he can, quite literally, take over games. His handle, particularly his crossover, is devastating, and his range is basically anywhere over half court. He can create shots all by his lonesome, and more importantly, he can ignite like no other bench player of his generation.

No longer young and wild, Crawford is the consummate professional and by all accounts a great teammate. You never hear Paul or Blake or DeAndre complain about him, even if he takes an ill-advised shot or five, because they know what he's capable of and what he means to the Clippers.

Simply put, Jamal Crawford is the Sixth Man of the Year, and if you think about it, he's among the all-time Sixth Men ever. His performance yesterday is indicative of exactly why, and he's every bit as important as anyone else on Doc Rivers' squad.