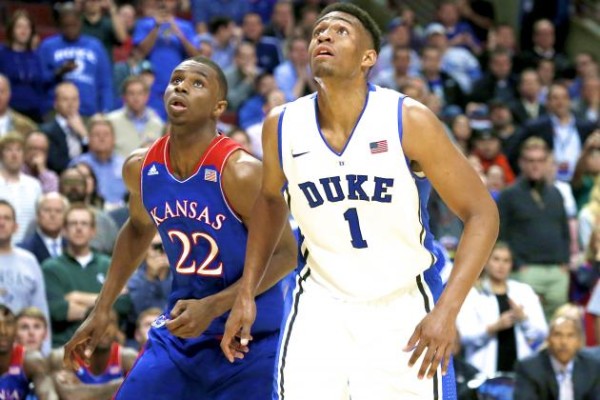 Tonight, the fate of NBA franchises everywhere will be altered in some way, shape or form, as is the case every year during the NBA Draft.

This year there is no shortage of intrigue — from the injuries to the alleged draft depth to the Cleveland Cavaliers getting a mulligan on their Anthony Bennett pick first overall a year ago. Essentially, we could come up with interesting topics all damn day centered around the 2014 NBA Draft. But nobody has time for all that.

So for the sake of brevity, here are five of the biggest questions heading into Adam Silver’s first NBA Draft as commissioner at the Barclays Center tonight.

How far will Joel Embiid fall?

As recently as March, Joel Embiid was the consensus number one pick in this draft. The freshman Kansas big man, relatively new to the game of basketball, displayed the type of athleticism, footwork, range, talent, hands and work ethic that had people envisioning a new-age version of Hakeem Olajuwon.

But after a late-season back injury kept him out of the NCAA Tournament, his status as the undisputed top pick began to wane. However, there was no question Embiid, along with fellow freshmen Jabari Parker and teammate Andrew Wiggins, was assured a top three spot. And even with his back troubles, most pundits still believed the seven-footer with the soft hands and tremendous defensive instincts was at the head of the class.

Then this past week happened, with Embiid fracturing his foot and throwing the entire makeup of the draft into a tizzy. Now, the Kansas big man is falling down the mock drafts, and it’s understandable that teams are hesitant to take a young man with two injuries in such a short time.

Now the question remains: How far will he fall? His slot as the top pick looks to be long gone, and that top three spot is in serious peril. It really comes down to what the doctors say and how teams view those doctors’ opinions. If the back issues are not chronic and the foot is simply a normal break that should heal fine, it’s hard to pass up such an enticing talent. But a big guy with back and foot problems — problems that have inhibited many a seven footer over the years — means there’s no telling just how far he could fall.

I know I’d be both excited and terrified if my team drafted him.

While Embiid crashed the party and altered the script for a time, we’re back where we started. The 2014 NBA Draft class was always supposed to come down to the two most highly touted freshmen in the nation, Andrew Wiggins and Jabari Parker, and that’s precisely where we’re at. The #Tank4Wiggins campaign was all the rage at the beginning of last season, and Parker lit college basketball on fire.

So now, who goes first between the two most hyped players in the class? Wiggins, who had an up-and-down season, showed flashes and seems to be the apple of most GMs’ eye. But Parker, with his NBA-ready offensive game and large frame, is poised to come in and be a threat from day one.

Obviously, a lot hinges on whether or not the Cavs actually are willing to trade their pick. Chances are the Bucks are content to take whichever player remains at two — and while Wiggins is the favorite just as he was before the two ever put on a college jersey, it wouldn’t be shocking to see Parker’s name called first in Brooklyn. Either way, we’re back to the Wiggins/Parker debate for at least one more day. 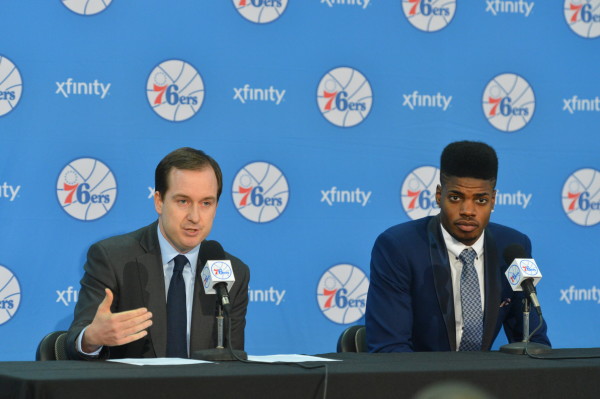 What in the world does Sam Hinkie have up his sleeve?

One year later and the rumors are swirling that Hinkie could once again deal his young, talented point guard. This time, it is MCW, the reigning Rookie of the Year, who could be moved. Especially with Embiid’s health throwing a wrench in things, the talk is heating up that the Sixers could move Carter-Williams and select Australian point guard Dante Exum. That would be a second consecutive bold move by the Sixers GM, one that would not be shocking any longer.

Hinkie has shown he’s willing to do damn near anything to acquire assets and help build a young core for the future.

There is also the belief that Hinkie really covets Wiggins and is willing to move up to get him. The most common trade rumor involves sending Thaddeus Young and the third pick to Cleveland in exchange for the top pick, which the Sixers would then use on Wiggins. But you never really know what’s legitimate and what’s simply misdirection when it comes to trade rumors, particularly around the draft.

What we do know is that Hinkie is not afraid to make a major move. He acquired an injured Noel last year — a guy who arguably would have been the top pick had he been healthy. Could he take a similar gamble on Embiid? Maybe. Or maybe he’ll make the move for Wiggins, or once again move his young, talented point guard to draft another young, talented point guard for a second consecutive year. It’s anyone’s guess, and that makes Sam Hinkie the most interesting man in the building.

Is Doug McDermott the next Tyler Hansbrough?

So quick, related tangent: I actually was in the building for Doug McDermott’s final game as a junior and then again as a senior for his final collegiate game ever. True story.

OK, now back to the draft. Doug McDermott, the National Player of the Year, is on exactly no one’s list as the top pick of the draft. In fact, the Wooden Award winner isn’t even in anyone’s top five. But he will most likely be a lottery pick, and his scoring ability should secure him a spot in the NBA for a long time.

However, many people question McDermott’s game in the same way they questioned another college star’s game a few years ago — Tyler Hansbrough. While their games are different — McDermott a more versatile scorer, Hansbrough a more aggressive rebounder and interior presence, at least in college — it’s hard not to look at McDermott and see a little Hansbrough in him. Is he athletic enough to have similar success in the NBA? Can he dominate against bigger, stronger, quicker players at the next level? Can he even be a regular starter among the world’s greatest athletes?

All those questions were the same ones that followed Hansbrough coming out of college. All those concerns have proved to be valid in regard to the former UNC great. Will that be the case with the best Creighton Blue Jay since Kyle Korver as well? 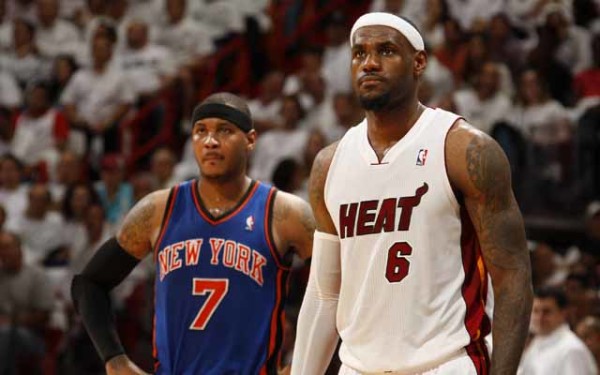 How do LeBron James, Carmelo Anthony and the 2014 free-agent class affect the draft?

You didn’t think I’d let you get through this entire post without mentioning LeBron James, did you? While we haven’t even touched on intriguing players such as Marcus Smart, Aaron Gordon, Julius Randle and any other number of excellent prospects in this draft, let’s face it, everything revolves around LeBron James in the NBA. And with LeBron James joining Carmelo Anthony in opting out of his contract and becoming a free agent, you have to wonder how the free agency of James, Anthony and the rest of the free-agent class will affect the draft.

What teams will be maneuvering more to make a play for James or Anthony (or both) than to make a splash in the draft itself? How many draft picks will move in hopes of clearing cap space for these superstars? What are the domino effects of LeBron’s second decision? The potential for chaos is beyond intriguing.

We obviously won’t know the answers any of these questions until later tonight — or years down the line — but these are questions worth pondering as we count down the hours until the 2014 NBA Draft.

Basketball Here’s The 6 Takeaways From the 2014 NBA Dra… 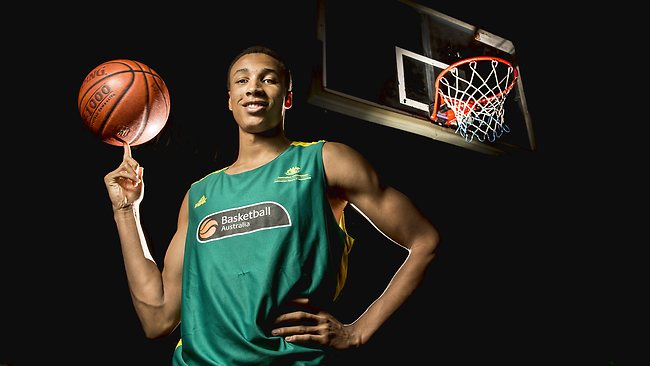