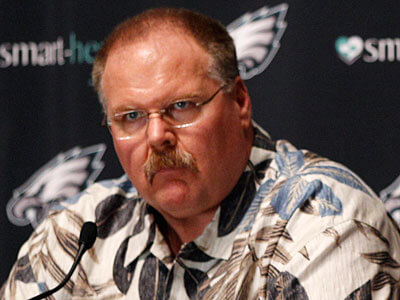 For the first time in a long time, there doesn’t seem to be a whole lot of buzz surrounding the Philadelphia Eagles heading into the 2012 NFL season. The entirety of the offseason talk around this team has centered around Michael Vick’s overblown “dynasty” comment and the heart-sick death of Andy Reid’s son, Garrett.

Other than that, the Eagles haven’t gotten much play outside of Philadelphia, a rarity during the Reid era. On an almost annual basis, the Eagles have been one of the most discussed teams in the league. Whether it was the rise and fall of Donovan McNabb, the Terrell Owens acquisition, the surprising MIchael Vick signing and everything in between, the Eagles have made a habit of making headlines across the NFL.

However, that has not been the case here as Reid prepares to lead the Eagles for his 14th season. ESPN has become even more of a parody of itself, spending the entire summer at Jets camp to follow the Tim Tebow story that no one cares about. Peyton Manning’s first season out of the Blue and White has been a hot topic. The Saints have been all over the headlines for obvious reasons. And with Robert Griffin III now leading the Washington Redskins, the defending Super Bowl champion New York Giants and the never-ending interest in the Dallas Cowboys all within the division, the Eagles have somehow become an afterthought.

As a man who has followed the Eagles with every waking moment, I understand the tempered enthusiasm and tempered expectations, because this is a team that still has many more question marks than answers heading into the regular season. Here are three of the most pressing ones.

4 Replies to “3 Questions Hanging Over The Philadelphia Eagles”

3 Questions Hanging Over The Philadelphia Eagles

A Sports Scribe The Good, The Bad And The Ugly: 2012 Miami Hurrica…

Football Rick Reilly And Pimpin’ Notre Dame On The Sl…
4