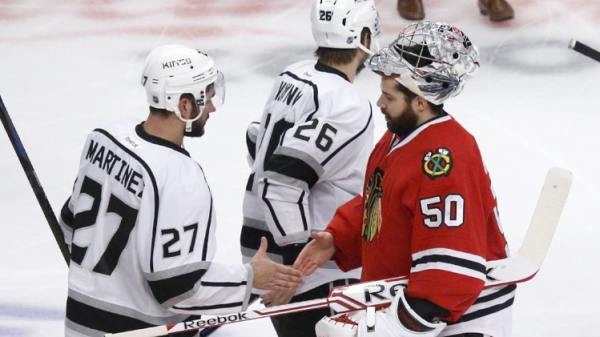 There is nothing more pressure-packed in sports than a team facing elimination. When your back is up against the wall and it truly is win or go home, everything is magnified.

The great teams rise to the occasion, embrace that pressure and play like there really is no tomorrow. Most teams, however, can only handle that stress for so long. They may stave off elimination once, twice, maybe three times in a playoff run, but if they push their luck too much, they're bound to stumble. You can't dance with fire for too long before you get burned.

Unless you are the Los Angeles Kings, that is. Seven times this postseason, the Kings have faced elimination, and all seven times they have found a way to keep their season going, most recently Sunday night with a 5-4 Game 7 overtime victory over the defending Stanley Cup champion Chicago Blackhawks to win the Western Conference and cement their place in the Stanley Cup Final against the New York Rangers.

It's been as remarkable of a run as you'll ever see, particularly given that the Kings were staring an 0-3 series deficit right in the face in Round 1 versus the San Jose Sharks. But the Kings, living by the mantra of never saying die, simply would not give up.

Let's take a look back on how, exactly, L.A. became the elimination game Kings en route to winning the Western Conference.

Coming off a crushing 4-3 overtime loss to fall down in the series three games to none, the Kings leaned on their brilliant netminder and a pair of talented forwards to keep the hungry Sharks at bay. Jonathan Quick saw 39 shots fired his way, turning away 36 of them, while trade deadline acquisition Marian Gaborik and decorated playoff hero Justin Williams potted two goals apiece. After alternating goals with San Jose to make it a 2-2 hockey game, Williams netted his second to put the Kings up for good, while Tyler Toffoli's wrister in the final minute of the second period turned out to not only be a backbreaker but also the game-winner in L.A.'s 6-3 victory.

Gaborik put the game away just 34 second into the third, while Quick did the rest.

There would be no drama in this one. Energized from staving off elimination and finding their first W of the postseason, the Kings cruised to a 3-0 victory, thoroughly outplaying San Jose in every phase of the game. Quick made 30 stops in the shutout, while the stars shone bright for L.A. Drew Doughty played nearly 30 minutes and notched an assist, while Toffoli, Anze Kopiter — L.A.'s best player and one of the best two-way forwards in the world — and Jeff Carter all scored.

It was a brilliant team performance, one that clearly showed the Kings were more than capable of becoming the first team since the 2010 Philadelphia Flyers (a team that featured Jeff Carter and Mike Richards, no less) to come back from an 0-3 series deficit. But the Kings still faced quite the uphill battle.

That uphill battle didn't seem too difficult to climb in this one, as the Kings once again completely dominated San Jose. At this point, the Kings fully embraced the pressure and then completely dismissed it, and once again, it was Williams and Kopitar doing the damage. Both forwards had two goals and an assist apiece, with Williams posting his second two-goal performance in an elimination game this year. You may have heard this guy is pretty clutch.

But it was the L.A. defense that really did the job, limiting San Jose to just 26 shots in a series that saw a ton of rubber fired at the netminders. Doughty continued to be the best player on the ice, while the Kings' confidence grew in this series-tying victory.

Where the Kings showed resiliency, the Sharks showed deflation. That doesn't mean San Jose tucked its tail between its legs after seeing its 3-0 series lead evaporate. Far from it. The Sharks came out determined, scored the opening goal and fired 40 shots Quick's way.

But it didn't matter. Quick was incredible yet again, while the L.A. offense exploded.  Once more, it was Doughty and Kopitar leading the way, somehow turning a game in which the Kings were outshot by 10 into a 5-1 blowout victory.

The Kings did something truly rare, winning four elimination games in one series alone. But expecting to do something similar against the top seed in the West, the Anaheim Ducks, would be fool's gold. Right?

After taking a 2-0 series lead, it looked as though Los Angeles would not have to entertain those thoughts. Flying high off their improbable first-round comeback, the Kings looked to be rolling.

That's when the Ducks showed why, exactly, only the Boston Bruins put up more points in the regular season, taking three straight to go up 3-2 in the series. Once again, the Kings were facing elimination.

It's almost as if the Kings had the Ducks right where they wanted them. With the season on the line for the fifth time, L.A. clamped down defensively and gave Anaheim no room with which to work. The Kings scored in the first and added another in the second, then simply took away all time and space for the Ducks.

Anaheim did get on the board with a goal, but Quick was left with little to do as the Kings suffocated Anaheim. Doughty and especially Kopitar were brilliant defensively, and the Kings kept up their living-on-the-edge run in front of their home fans.

Forget about hyperbole. At this point, the Kings simply put the pedal to the metal for a second straight Game 7 and destroyed the favored Ducks. Mike Richards was a monster at both ends of the ice, Justin Williams kept up his Game 7 reputation with a goal and an assist, and Quick continued to stand up to the pressure that at this point seemed routine. The 6-2 rout saw the big names light the lamp — Williams, Carter, Richards, Kopitar, Gaborik — while the Kings continued their all-around dominance in elimination games.

In addition to the six goals, the Kings stayed out of the box for the most part and killed all three penalties that resulted in Anaheim power plays, all while limiting the potent Ducks to under 30 shots.

Their reward for overcoming an 0-3 deficit followed by toppling the top seed? The defending Stanley Cup champs.

This time, however, the script was flipped. For the first time all postseason, the Kings were the first team to three victories, taking a commanding 3-1 series lead by scoring 15 goals combined in Games 2 through 5. Suddenly, L.A. was in a position to close out a series early.

So of course, the Kings couldn't. The Blackhawks displayed the heart of a champion, staving off elimination by withstanding a furious L.A. comeback to win in double OT thanks to the creativity of Brandon Saad and Patrick Kane and the finishing touches of Michael Handzus.

Kane was the hero again in Game 6, assisting on the game-tying goal midway through the third before potting the game-winner — his second of the night — with less than four minutes remaining. Chicago had just done its best L.A. impression, winning two elimination games to force a Game 7.

Of course, now the Kings were back to facing elimination, and we all saw just how dominant they were in the final contest the first two rounds — winning by an aggregate total of 11-3 in the prior Game 7s.

That would not be the case this past Sunday night. Far from it, in fact, as the Blackhawks jumped out to a 2-0 lead and looked to be all set to defend the throne.

But of course the Kings would refuse to give up. This was an elimination game, after all. Jeff Carter batted a puck out of midair to get L.A. on the board, and Justin Williams once again added to his Game 7 legend, scoring the equalizer while tying some guy named Wayne Gretzky atop the all-time leading point-getters in Game 7s.

However, the good vibes wouldn't last long. Just 12 seconds after erasing that two-goal deficit, Patrick Sharp put the Blackhawks ahead. How many times could this team realistically come back?

Turns out, plenty. Toffoli tied it in the second. But when Sharp scored his second of the game to put the Blackhawks up 4-3 with less than two minutes left in the second period, the pressure was really on.

Wait, did I say pressure? How silly of me. Of course the Kings didn't bat an eye, as Marian Gaborik tied the game late in the third to force overtime, his 12th goal of the playoffs. Talk about a great deadline acquisition.

Then, in this wild back-and-forth contest, the Kings did what they had done six times before, finding a way to win yet another elimination game on a seeing-eye shot by Alec Martinez that deflected off Chicago defenseman Nick Leddy and past Corey Crawford in overtime to advance to the Stanley Cup Final.

Now the Kings, armed with some of the game's best players — Doughty, Quick, Kopitar, Carter, Williams, et al — find themselves within four wins of hoisting the Cup. They've played the maximum number of games you possibly can at this point in the season — 21 of a possible 21 games through the first three rounds — seven of them with the season squarely on the line. They've won all seven of those, laughing in the face of the elimination game pressure along the way, 12 wins overall and a Conference title already in their possession — and they've done it in a variety of ways.

There is no higher pressure than the Stanley Cup Final. That should make the Eastern Conference champs terrified, because as these Elimination Game Kings have shown seven times over (and more), pressure only brings out the best in them.