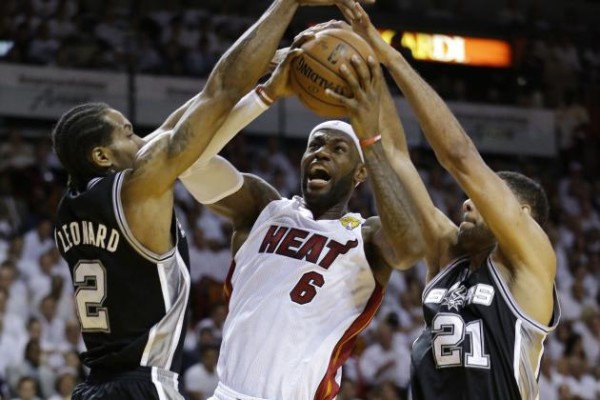 With the way the San Antonio Spurs carved up the Heat in Game 3, I anticipated much more defensive energy and that stingy Miami D to rear its head.

None of that happened. Not even a little bit. The Heat scored the first bucket of the game to take a 2-0 lead … and then never went ahead at any point in the game following that. Not even for a single second.

For the second straight game, the Spurs put on an offensive clinic, and the Heat looked flummoxed, helpless and dog tired. At no point in the contest, not even when Miami made a little push in the third quarter, was the game in question. It was San Antonio's from the jump, and the 107-86 final was 100 percent indicative of just how dominant the Spurs were in taking a commanding 3-1 lead in the series.

Boris Diaw was dropping dimes. Tim Duncan was easily double-doubling. Kawhi Leonard was doing everything with his 20 points, 14 rebounds, three assists, three steals and three blocks. Tony Parker was running circles around Miami. And Patty Mills was doing his own personal Manu Ginobili impression, netting 14 points off the bench.

It was beautiful basketball. Almost flawless basketball. Twenty-five assists on 40 made baskets. Every player on the roster putting up points. The personification of team basketball.

So, What Did Rev Learn From Game 4 Of The NBA Finals?

That the San Antonio Spurs are just too damn good. Simply put, they are better than the Miami Heat in every single phase of the game — and in many aspects, far better.

In this day and age, folks tend to focus on the negatives — why a team didn't win, why LeBron James came up short, why the Heat are choking away their chance at the three-peat. It's the culture we live in now, trying find the reasons why the losers failed as opposed to discussing why the winners won.

This isn't a case of the Miami Heat rolling over and dying in these NBA Finals. The Heat aren't losing a series they should be winning. The San Antonio Spurs are simply a better basketball team, and they have earned every bit of the three wins they've gotten so far.

The Spurs have better players, one through eight, better coaching, better offensive sets, better ball movement, better defense, better schemes and better complements to each individual player's style. Miami may have the best player in the world, but neither LeBron nor the Big 3 stand a real chance against a team as deep, talented, versatile and disciplined as these San Antonio Spurs.

The Heat aren't choking. The Spurs are simply beating them. Period. Because the San Antonio Spurs are too damn good.

5 Replies to “What I Learned From Game 4 Of The NBA Finals: The Spurs Are Just Too Damn Good”