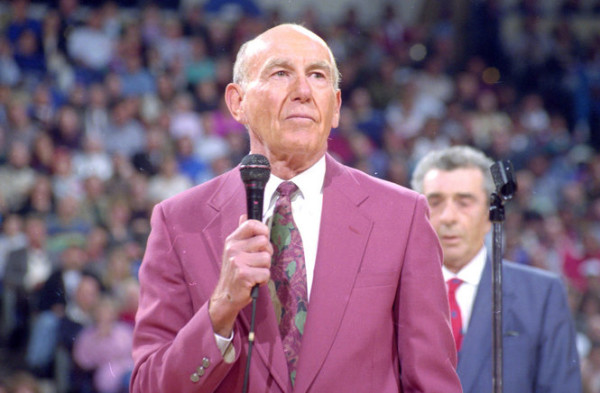 As the sensationalist media and talking heads focus their attention on an ignorant, out-of-touch old man disgracing the NBA, there's a far more worthy person associated with the league that should be the focus of the NBA world. That man is Hall of Fame coach Dr. Jack Ramsay, who passed away yesterday at the age of 89 of cancer.

Everyone knows of Ramsay's Hall of Fame credentials — coach of the legendary 1977 NBA champion Portland Trail Blazers, a team many consider the greatest team of all time, not to mention his longtime, brilliant broadcasting career. As a spry 30-year-old, I have virtually no memory of Ramsay on the sidelines, considering I was only 4 years old when he coached his last game, but I've watched more than enough classic NBA games and clips to see him in action during the wild blazer days of the '70s.

But I really got to know Ramsay, like the majority of NBA fans of my generation, through his broadcasting. He was, without a shadow of a doubt, an educator — the type of broadcaster who taught you something each and every time you tuned in to a game he was calling. To me, he was essentially the same type of broadcaster as Hubie Brown, only with even more credibility due his coaching success. I honestly got excited, the same way I do for Hubie, every time I saw Dr. Jack was doing the broadcasting.

Born in Philadelphia, he went to Drexel Hill High School after spending his childhood in Connecticut and then went on to play and graduate from St. Joseph's University. Despite his Connecticut upbringing, Jack Ramsay was as Philadelphia as it gets. He cut his coaching chops as the head man at his alma mater, leading the Hawks to 10 postseason appearances in 11 seasons along with a Final Four, and he basically established the basketball tradition for the little Jesuit school on the Main Line. He's the greatest basketball coach in St. Joe's history, proof by the Ramsay Basketball Center on the site of the old Fieldhouse that bears his name and honors his career.

Dr. Jack also started his NBA coaching career in Philadelphia, amassing a 174-152 record for the 76ers, before moving on to Buffalo, then Portland — where he coached for 10 seasons and won his NBA title — and ultimately finishing out his coaching career in Indiana.

The thing about Ramsay that stands out the most is the way he was so gracious in his education of the game. You didn't hear Dr. Jack disparage players or even referees much. All he did was observe, relate and teach. He wasn't in the business of cracking jokes or making himself a personality. He was in the business of telling the viewer exactly what was going on, even the things most fans couldn't see.

The man produced a plethora of coaches, plenty of wins, and relayed knowledge that one could only get from a true innovator and master of his craft. And he did some other things you may or may not know about.

At the end of the day, the NBA and the game of basketball are what they are today in part due to Jack Ramsay. He helped move the game forward, helped establish foundations of the game, and then went out and relayed all his wisdom to the fans.

No one has ever publicly said an unkind word about the man as far as I know, probably because he rarely ever uttered an unkind word about anyone else. He was the type of person the NBA can be proud of, should be proud of. And he's the type of man who deserves a whole hell of a lot more than being relegated to the below-the-fold section underneath an old, pathetic bigot who is hogging all the attention.

So instead of reading another article or listening to another blowhard discussion about that despicable cretin out in Los Angeles, go back and read about Dr. Jack Ramsay, watch his highlights and listen to his sweet, soothing voice call classics while teaching you things you never knew even existed. I promise you, afterward, you will learn something you didn't know before, and you will be a smarter, wiser, better fan because of it.

Rest in peace, Dr. Jack Ramsay. You will be missed more than anyone probably even knows.