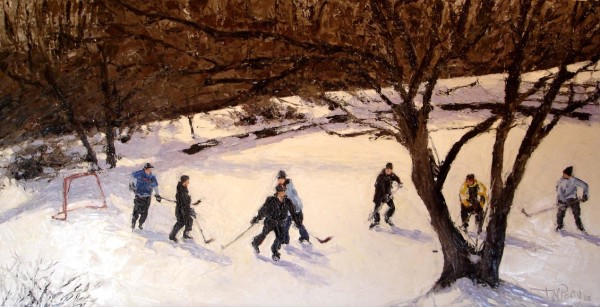 As I begin to write this, it's January 1, 2013, the scheduled date of the most anticipated Winter Classic yet. Emphasis on scheduled. As you've likely heard by now, the NHL's annual marquee event was canceled along with over 50 percent of the regular season thus far as part of a truly crippling lockout.

Hockey fans must now look back at 2012 with a rueful eye. The memories of Drew Doughty leading the Kings on a sterling 16-4 Stanley Cup run faded into an autumn full of petulant dispute. With the season now on life support, fans' aversion to the NHL has increased to an all-time high. Many, including this writer, simply don't care anymore. But I'm not here to eulogize the NHL, nor my NHL fanhood.

Instead, I want to offer a distinction between a league and its sport. Hockey endures even if the NHL does not. I found this truth where I've found it many times before: on a pond in Northern Minnesota. In my holiday excursion to the Northland, I went in search of more than my mother's home cooking.

It's easy to drift into hyperbole when talking about hockey in Minnesota. "It's a religion," you'll often hear a clichéd citizen say. I always shied away from such comparisons. That is, until last week when a former Duluth East Greyhound legitimized the claim. Nick Nelson, a standout forward on one of the state's most storied programs, served as a deacon during Pope Benedict's (yes that Pope) Christmas Eve Mass, which he explained was like "playing on a line with Wayne Gretzky, only better."

If hockey is indeed a religion, then the frozen pond is a Minnesotan's sanctuary, a place to escape the corrupted world of a heavily politicized sport. The corporate arena gives way to the family home. The snow banks serve as boards, appropriately white and free of advertisements. The rising evergreens encircle the makeshift rink, providing a surround soundtrack of blades carving ice, sticks clashing and pucks ringing off metal posts — a happy alternative to the tired arena anthems of the Black Eyed Peas and company.

The game itself is imperfect and thus pure. Goals are improvised as are the teams. Gone is the playground style pick 'em; welcomed is the sticks in the middle technique. Players wear moosehide choppers (which incidentally might be the most Minnesotan thing I've ever typed) and assorted jerseys from their youth. In other words, the uniforms aren't uniform.

When the pond cracks leaving fissures inches deep in the ice, we turn not to the Zamboni but instead to the garden hose unless it freezes in the winter air. This is hockey, ladies and gentlemen, stripped of farce, returned to its natural home.

I'd like to think that we at TSFJ are fans of the sports themselves rather than the leagues we watch. I found hockey again in the midst of the lockout. For the nine days I was home, I didn't miss the NHL. Gary Bettman cannot reach the pond, and thus cannot reach hockey. Roger Goodell cannot adjudicate a pickup game in  a vacant lot. David Stern cannot reprimand a flopper in a game of HORSE, regardless if the player in question did or did not call the fall before executing the shot. Instant replay hasn't yet reached the sandlot.

As I wrote near the top of this post, hockey endures. One doesn't need to travel to such extremes either latitudinal or temperature-wise as me to find it. Flip on the World Junior tournament this week on the NHL Network to find the most intriguing amateur sports tournament in the world. Catch a college game on a lonely Friday night.

What you'll find, as I did, is a sport as healthy as ever, void of the distractions of its professional league.

11 Replies to “The NHL Stops, Hockey Does Not”