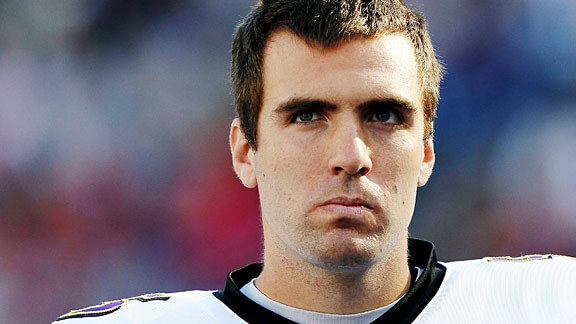 Let me start by saying I'm one of your biggest supporters. When the Ravens drafted you with the 18th overall pick in 2008, I was elated. I felt like Baltimore finally had the general they needed to fit their style of play. And for a while, you proved me right. In 2008, where I thought the Ravens would do 6-10, 7-9 at best, you helped us get to an 11-5 record and an AFC Championship appearance. The day I knew that season was special was when you were in a wildcat formation and Troy Smith threw that 43-yard pass to you against Oakland. Although you didn't throw the ball, it was that moment that I knew you would do wonders for our team. 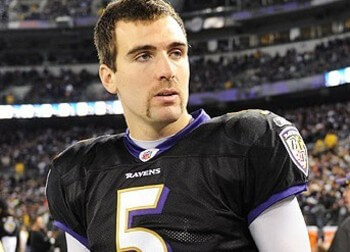 As the years went on, you improved slightly better than the year before. In 2009, your completion percentage went up. In 2010, your TDs went up. It looked as though you were making strides to be more than just a good quarterback. It looked as if you were going to be "the guy" for years to come.
But there was always something was always missing...something that wasn't quite right. One could never put their finger on it, but something lacked in the way you played.
In 2011, we got to see less of your usual stoic personality and more of your louder, vocal side. You started speaking up more, starting with the firing of Jim Zorn, to the handling of Lamar Woodley's comments about you and even the request for a new contract. This wasn't the Flacco we grew to know. This was some new guy. For the most part, we embraced it, because we longed for the day that you'd do more than just brush it off your shoulders. We wanted you to speak out, and, that, you did.
A lot of fans believed that was the spark you needed coming into the 2011 season. Fans like myself hoped that this was the year you finally turned the corner and took over the helms of the team. The Ravens thought so, too, when they released offensive leaders such as Derrick Mason and Todd Heap, while adding younger players like Torrey Smith and Ed Dickson. We truly believed that this was your time to shine, and we would finally get to the promised land: the Super Bowl. But the more things change, the more they stay the same.
Just like in years past, Ravens fans looked at the 2011 season and have no idea how to view it, or how we got here. One one hand, the record says the Ravens were a success, having their second 12-4 record in as many years and earning a first round bye. But fans STILL had no idea what team this was offensively. On paper, the Ravens look like a powerhouse with the likes of Ray Rice, Anquan Boldin and Lee Evans along with Smith. On the offensive line, you have studs like Bryant McKinnie, Ben Grubbs and Michael Oher. Yet, the offense finished in middle-of-the-pack, ranking 15th, while your completion percentage and touchdown passes declined from previous years. Certainly, you understand why fans are concerned and want you to do better.
So here we are... AFC Championship weekend. While you should be answering questions about your preparation against the likes of Vince Wilfork, Brandon Spikes and Patrick Chung, you instead must answer questions regarding your teammate Ed Reed making some revelations on the radio that has since caused a media frenzy. Although I found Reed's comments to be truthful and, in no way malicious, surely this is a distraction to what you want to accomplish this weekend.
From the beginning, I've defended you, and with good reason. You had the fifth-highest completion percentage for a rookie in the history of the league. You're the first QB in NFL history to win a playoff game in your first four NFL seasons.For the first time in your career, you swept your archrival, the Pittsburgh Steelers, with an impressive 92-yard drive to throw the winning touchdown in the final seconds. Despite what the critics say, no defensive player did that.
That was all you. You are a part of this team's success as much as anyone else. But now it's time you put it all on the line.
Your biggest supporters and naysayers will be watching you this Sunday. Every move you make, we'll be watching and dissecting. As much as I want you to succeed, many already think you will fail. Beating the favored Patriots with some remarkable plays will (temporarily) change the perspective of many football fans, wondering if you'll stand up to the challenge or fold.
Please prove me right, Joe. Prove to myself and Ravens fans everywhere that our faith in you isn't a stretch. Prove to us that your big arm isn't just more than fool's gold. Prove that you can withstand the adversity and get the job done when duty calls.
Unless you forgot, the duty calls right now. And this may be your last chance.
Your supporter,
Reeta, The NFL Chick