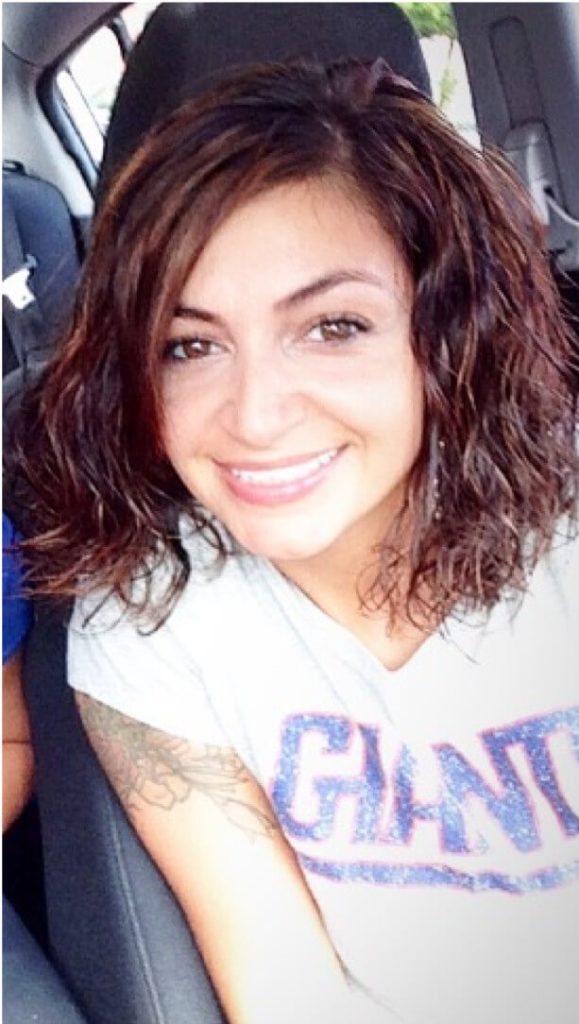 Meet Ryan Dollard, an avid football fan of the New York Giants who makes noise on Twitter. Whether it’s talking about the Eagles’ empty trophy case or defending her quarterback Eli Manning, Dollard is a joy to follow (unless, of course, you are a fan of an opposing NFC East team).

She’s a beautiful, petite woman, about 5-feet tall, with a voice as sweet as pie. But when it comes to Giants football, she easily transforms into a woman who bleeds blue and uses sarcasm and vulgarity at times to make her point clear to the world. The Staten Island native has been a fan of the Giants her entire life, or as she would say, “Coming up on 34 outstanding years!” 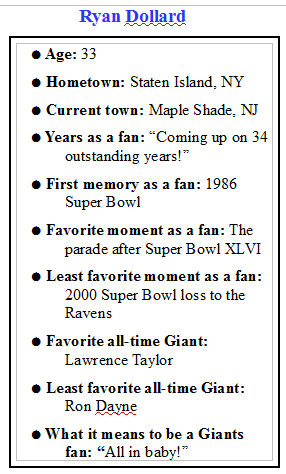 When asked about her choice of the Giants over the neighboring Jets, Dollard says the choice was easy.

Of course, being a Giants fans will always come down to defending Eli Manning. While some would consider Manning to be nothing more than an inconsistent quarterback with a lucky playoff streak, Dollard rides for number 10 through thick and thin.

“He is inconsistent at times. Week to week you sometimes don’t know who’s going to show up. I love him, but he’s bad for my blood pressure.” She ends her Eli rant with a light note about his other gifts by adding, “He can rap his ass off too!”

When talking about the Giants, particularly in the Eli Manning era, one can’t help but bring up Super Bowls 42 and 46, in which they defeated the New England Patriots twice in four years. Dollard admits that defeating the Pats in their 2007 undefeated regular season will always be her favorite game of the two.

“I watched it with my whole fam,” she says. “It was improbable. They were the complete underdogs. It was just so amazing. The [David] Tyree catch and the [Plaxico] Burress touchdown — I still watch that season and Super Bowl run on DVD, and it gives me chills every time. Every friggin time!”

Fans in the NFC East can never really call what their teams will do for the upcoming season. The division is one of NFL’s most competitive. Dollard says it’s difficult to predict, but there’s reason for hope.

“If the young guys step up and the offensive line gives Eli time to be Eli, we could make some noise," she explains. "Last year left so many questions and holes. But we had a decent draft and free agency. Just gotta hope Eli bounces back. I can’t give a final prediction just yet.”

A Giants girl in a Philadelphia world, Dollard currently lives in Eagles territory, just 12 miles outside of Philly. Being so close to the city of “not so Brotherly Love” with a history of some outrageous fan moments, Dollard says you have to hold your own behind enemy lines.

“Being a Giants fan in Eagles territory, you gotta hit these motherf***ers over the head with the ‘no Super Bowl’ argument because they will go hard on you," she says. "So reminding them that their team always falls apart at the wrong time will always be relevant.”