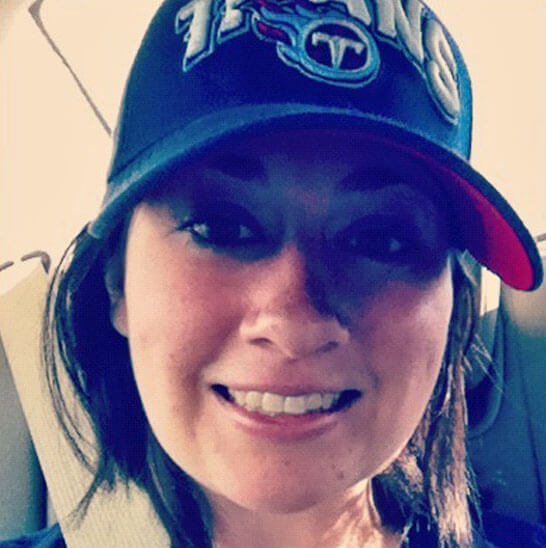 We bring you Mark Trible and Dillon Friday's NFL Countdown project. A fan from each NFL team will be featured as we anxiously await the season's kickoff.

Jenna Irwin remembers cheering for the Tennessee Oilers soon after they moved from Houston in 1997. She's been a die-hard fan ever since.

It was only right for Irwin — a Knoxville native and huge Tennessee Volunteers fan — to adopt the new NFL team. She now enjoys the luxury of rooting for two football teams in her own backyard.

"I didn't have a NFL team before the Titans moved,” Irwin says. "I didn't jump off a team's bandwagon to become a Titans fan. I became a Titans fan when the Titans were born. So no other team has the emotional attachment that I feel for the Titans." 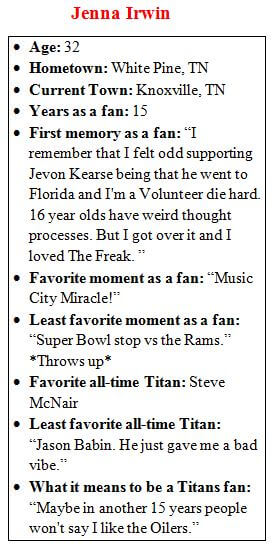 The Titans boast an impressive list of players despite their relatively short history. Eddie George, Derrick Mason, Albert Haynesworth — remembered for both good and bad — Vince  Young and Chris Johnson are a few who come to mind.

One, however, stands above the rest. The late Steve McNair, whose résumé includes a Super Bowl appearance, two AFC Championship games and a co-MVP award, is Irwin's favorite player.

"McNair had such a huge impact as a player because of his toughness," Irwin says. "We need more players to put the team on their back.”

She believes that Tennessee's disrespect toward its star quarterback, and later his tragic death, hindered the Titans' progress.

“I honestly think that the way the end of his career was handled set the franchise back,” she says of the 2006 incident when the Titans locked McNair out of their training facility to avoid paying him a roster bonus. “I truly think that if he had been around the franchise the last few years, it would be in better shape."

Super Bowl XXXIV against the St. Louis Rams remains the most exciting moment in Titans history. Tennessee came within a yard of tying the game at the end of regulation when Kevin Dyson was tackled just short of the goal line.

"I was watching in the living room. When (Dyson) reached out and was short, I cried,” Irwin explains. “I'm not ashamed of that. I sobbed my 17-year-old heart out like it had been shattered. I honestly couldn't even look at a photo of that moment without having a severe adverse reaction of wanting to throw up until about four years ago."

That was then, and this is now. With training camps starting for the 2014 season, Irwin has high hopes. She thinks that the Titans possess the tools necessary to compete for the division title this year, even if most see the Colts as the front-runner in the AFC South.

"[We’re] banking on [Jake] Locker to stay healthy, and we have a decent wide receiver corps. Justin Hunter has a season under his belt. We've got the vet Nate Washington. Kendall Wright is going to do what he does,” she says. “A new face at running back may not be a bad thing, and I was a [Chris Johnson] fan. Sometimes change can be good. The Titans have plenty of that. Maybe the new look and new coaching staff will surprise people.

"If they get that close to a Super Bowl (again), I have to believe that one day I'll live to see them win one."

4 Replies to “Meet The Fan: Jenna Irwin's Been With The Tennessee Titans Since The Start”