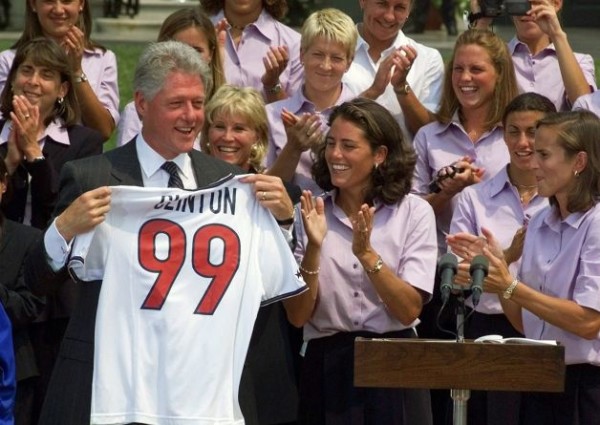 As a woman who indulges in sports heavily, I'm extremely grateful for ESPN doing the Nine for IX series. It puts women in sports on a platform that no other network has taken the chance on. Far too many times, we as women are told we aren't, "in our place" when we express our love for sports. These documentaries show that not only are we intelligent but that we can also be dominant.

The stigma of women pretending to be knowledgeable will never go away, but ESPN shining a bright light to the women who have succeeded in their sports careers gives a positive spin to what is still considered a sensitive topic by many women sports lovers. Hopefully these documentaries will continue, years after the Title IX anniversary, to show the world we love the game, too.

Many thanks to ESPN for being the gift that keeps on giving!

“Title IX indelibly changed the world of sports, creating new opportunities for women to get involved with sports at the collegiate and professional levels. The Nine for IX series celebrates Title IX with an extraordinary collection of inspiring stories directed by a powerhouse group of Academy and Emmy award-winning female filmmakers.” -- ESPN Films Vice President Connor Schell

ESPN Home Entertainment, in conjunction with Team Marketing will release the “Nine for IX DVD Gift Set” on October 15, 2013. From the producers of ESPN Films’ award-winning “30 for 30” series and executive produced by Tribeca Film Festival co-founder Jane Rosenthal and Good Morning America co-host Robin Roberts, this four-disc collection includes all nine titles from the Nine for IX series, plus two bonus films: the award-winning ESPN Films’ short, Coach and the SEC Storied film, Abby Head On. The“Nine for IX DVD Gift Set” will be available for pre-order on September 3 at ESPNShop.com, Amazon.com, Wal-Mart and major retailers wherever DVDs are sold.  The suggested retail price is $29.95.

Here's the breakout of the 9 films plus the 2 shorts that will be included in the box set, and be sure to check below to an awesome scene from The 99ers as Bill and Hillary Clinton strolled into the US Women's locker room after the quarterfinals match versus Germany in the 1999 World Cup.

- Venus Vs. (Directed by Ava DuVernay)

- No Limits (Directed by Alison Ellwood)

- The ‘99ers (Directed by Erin Leyden / Produced by Julie Foudy)

- Abby Head On (Directed by Erin Leyden and Gentry Kirby)