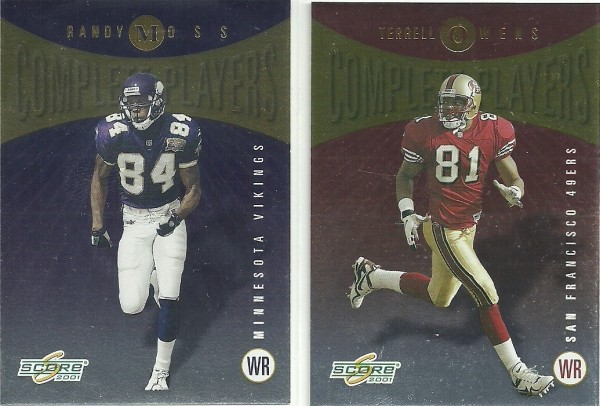 With the news on Monday that the Seattle Seahawks signed Terrell Owens to a one-year contract, it got me thinking about Owens and fellow star receiver Randy Moss both returning to the NFL in 2012 after missing all of 2011 despite both being healthy.

When you take a step back and look at the careers of surefire Hall of Fame wide receivers Randy Moss and Terrell Owens, it's astonishing just how their careers mirror each other. It's almost eerie, to be honest with you.

The only difference came at the very beginning of their careers. Owens, being a few years older than Moss, entered the league in 1996 as somewhat of an unknown out of Tennessee-Chattanooga, a third-round pick playing behind the greatest wide receiver of all time. It wasn't until his unforgettable catch against the Green Bay Packers in the playoffs that he truly became a star and took the reins from Jerry Rice.

Meanwhile, Randy Moss was already one of the most famous football players on the planet dating all the way back to high school. Moss had signed a letter of intent to become the next star wideout at Notre Dame, following the footsteps of Tim Brown and Rocket Ismail. Instead, he got in a huge brawl and tested positive for marijuana, losing his scholarship to Notre Dame and being relegated to Marshall. There, all he did was dominate with Chad Pennington tossing him the pill, and everyone waited to see just when in the first round Moss would get drafted.

Somewhat surprisingly, 20 teams passed over Moss before the Vikings finally took him at No. 21 overall, and all Randy did from there is put up 1,313 yards and 17 touchdowns on his way to winning the 1998 Offensive Rookie of the Year. Moss was a star from day one.

But that is pretty much the only area where these two differ. Because the rest of the way, Owens and Moss were like two peas in a pod. 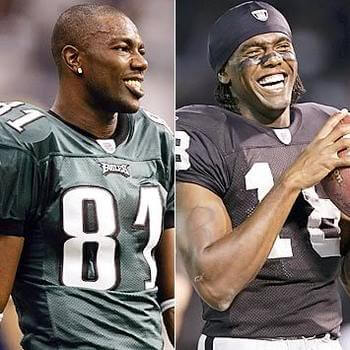 Both Owens and Moss began their careers playing alongside wide receiving legends — T.O. learning from the greatest of all time, and Randy working opposite Cris Carter, who as the former Philadelphia Eagles head coach who cut him due to his drug issues as a youngster, Buddy Ryan, so famously said, "All he does is catch touchdowns." Right upon entering the league, Owens and Moss were getting schooled by greats, picking up invaluable knowledge and work ethic.

Quickly, both surpassed the old men who taught them, becoming the two biggest stars at the wide receiver position in the NFL. Moss put up astronomical numbers and got such an absurd start to his career that people were wondering if he'd be able to surpass Jerry Rice's greatness some day. He basically put the Minnesota Vikings back on the map.

The same can be said for Terrell Owens. After Steve Young had to retire and Rice had moved on, the 49ers leaned on T.O., and the man did not disappoint. If Moss was the best wide receiver in the game at the time, Owens was a close second. Using his big, physical frame, he was fearless going over the middle, had more speed than people realized and simply made big plays. It was, for all intents and purposes, Moss and Owens, then everybody else.

But, as the two became synonymous with their franchises, they both also began to stir up controversy. Owens, realizing his own greatness, let it go to his head. He started demeaning his quarterback Jeff Garcia, complaining about not getting the ball, becoming an obnoxious distraction. Moss, on the other hand, had a few off-the-field missteps, and he also got criticized for taking plays off, not running hard and rarely attempting to block. While the controversies were different — T.O. has never been accused of dogging it on the field, and Moss hasn't thrown seemingly every QB he's played with under the bus — the two became lightning rods and eventually wore thin in Minnesota and San Francisco.

So in 2004, both star wideouts got treated to new homes. Moss headed out west to become a Raider, while T.O. forced his way to Philadelphia to team up with Donovan McNabb.

Randy was disinterested and unimpressive in Oakland from the get-go, playing for a fledgling franchise with no real direction. Owens, as we all know, combined with McNabb for one of the most prolific seasons ever before breaking his ankle. He then returned in the Super Bowl and dominated, but shortly thereafter, the bad T.O. reared his ugly head.

Moss practically begged out of Oakland, while T.O. went on a personal tirade against McNabb for "not having his back," eventually tearing the Eagles apart just one season after helping them get to the Super Bowl. He was exiled, as controversy again took over for Owens and Moss. 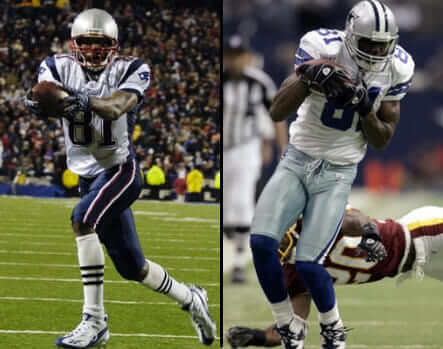 It was a moment of truth for both players, with some people feeling neither was worth the trouble. Well, they both proved the naysayers wrong. Moss joined Tom Brady in New England and rewrote the record books, scoring a single-season record 23 touchdowns on passes by Brady, helping New England go undefeated in the regular season before somehow losing to the Giants in the Super Bowl. Moss then had two more very productive full years in New England.

T.O., meanwhile, was continuing to be a force in Dallas, putting up three straight 1,000-yard, double-digit touchdown seasons. And even crying for his quarterback, Tony Romo.

Just when both looked like they were more trouble than they were worth, Moss and Owens flourished.

But then, they both became forgotten men, vagabonds. The Patriots, having no Super Bowl victories with Moss despite his tremendous success with Brady, no longer needed him with Wes Welker and the tight ends in the fold. So he was shipped off to Tennessee and then Minnesota, where he completely faded into obscurity.

Owens meanwhile became extraneous for a Cowboys team that simply could not win come playoff time. So T.O. moved on, and for the first time since Jerry Rice was his teammate, he managed to stay quiet and have two pretty good years, one in Buffalo and one in Cincinnati. But at this point, both Owens and Moss were old, not the players they had been throughout the years. And the league decided they no longer needed either one's services. So in 2011, two of the greatest receivers of all time, the two best receivers of the late 1990s through most of the 2000s, were left out to pasture against their will.

Now, both are back in 2012, their careers continuing to mirror one another. Moss is reportedly looking a little like his old self in San Francisco, while Owens prepares to join Seattle. Not only are Owens and Moss back in the NFL, but they're in the same division.

Now in 2012, they both look to extend what little time is left in their careers. And some time in the not too distant future, they will be reunited once again, this time in Canton.

No matter how things pan out in San Fran and Seattle, it'll be fascinating to watch, and even more fascinating to marvel in just how similar the careers of Randy Moss and Terrell Owens have been.