The Merritt College campus sits atop a sprawling hillside just above Highway 13 in East Oakland. From the school’s main entrance, one can enjoy breathtaking views of the Bay Area, from the region’s economic epicenter of San Francisco to the backbone of the tech industry, Silicon Valley. The vantage point also offers a glimpse of the stomping grounds of the city’s most famous son, Gary Payton.

Speaking to Payton, you can’t help but feel the spirit of the city locals affectionately call “The Town.” The brashness, born out of countless pickup games in recreation centers like the Rainbow Recreation on 58th and International or the East Oakland Youth Development Center on 82nd, is apparent from the moment you say hello. The toughness, built from trips to the legendary Mosswood Park in North Oakland, where Payton would play against older competition in some of the best runs on the West Coast, help shape the Hall of Fame path he’d walk for the next 25 years.

Payton’s son, Gary II, who now plays for his dad’s alma mater Oregon State, is the opposite. Instead of hopping fences in search for an open court like his father, Payton II grew up with unlimited access to gyms around Las Vegas (Payton II’s hometown) and Seattle, where his dad worked as a franchise cornerstone of the SuperSonics. While his dad grew up in a strict middle-class East Oakland neighborhood, surrounded by gangs and drugs during the height of the crack epidemic in the 1980s, Payton II’s upbringing was lived in the lap of luxury.

Perhaps the most glaring difference between two was the winding, grapevine-like road Payton II traveled to become an Oregon State Beaver. Unlike his dad, who dazzled Oakland Athletic League crowds while starring at Skyline High School before earning a full-ride scholarship to Corvallis in 1986, Payton II’s journey took him from the comfort of his dessert home in Vegas to Salt Lake City, where he enrolled at Salt Lake City Community College for two years, before finally heading west to enroll at OSU in the fall of 2014. 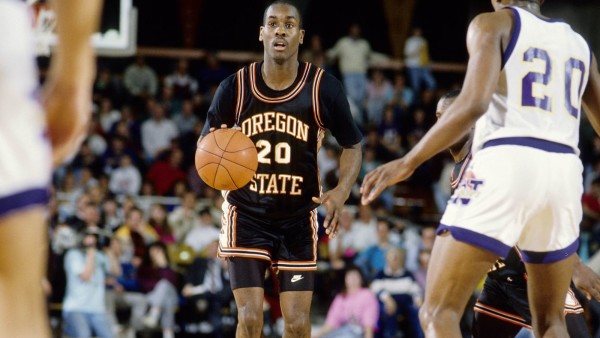 Despite his son averaging just over 13 points and seven rebounds in his first season in the Pac-12, Payton Sr. still saw room for improvement.

“What I did was I looked at his game and said, 'Look, everybody has been talking about how soft you are and how tougher you have to get, and they wish you had my demeanor.’ So I said, ‘You’re going to get your own identity, but I want you to go back and see what your daddy grew up doing and how I was and how I came up.’”

“Going back” meant Payton Sr. temporarily relocating his son from the comforts of Corvallis for the summer to the hardwood of Merritt College some 570 miles south in California.

“When I took him back there (to Oakland) and got him away from his friends,” said Payton Sr. of the move, “I got him away from all the lovely lifestyle stuff. Didn’t let him go and go party afterwards and be with his partners and just come in there and be hard working and tired when you get home.”

The workouts at Merritt were serious and strenuous.

“It was just different things they would do,” Payton II remembers. “Defensive slides, throw me a bean bag, I’d go all the way [down the court] and come back. Different things to help me with my game, shooting, dribbling, conditioning. It was a good workout.”

After a month, Payton II began to improve dramatically, but the next leap happened when NBA All-Star guard DeMar DeRozan joined the workouts.

“DeMar killed him for the first two days,” Payton Sr. admits. “Made him look like a fool. Then all of a sudden he started understanding that ‘I might be good enough to compete with this guy. Let me start blocking his shot. Let me start doing the things.’ And he started doing it and then it matriculated on to this season, and that’s why he got more confidence going into this season and doing the things he do.”

Lessons on the court were strengthened by education off it. Like he had done so many times during his son’s childhood, Payton Sr. warned his son of the cautionary tales from ballplayers around him during his own childhood in the East Bay.

“I showed him all that. I showed him about all the guys that I went to school with that most of them are dead, most of them are in jail. When I played in the OAL (Oakland Athletic League) and all the players that could’ve came out of there and could’ve been pro prospects and college prospects, but they let the streets take their life.”

Those guys include Hook Mitchell, a Bay Area hoops legend, who originated the dunk over an automobile long before Blake Griffin even dreamed of dunking over a Kia. Mitchell’s life and hoops career were derailed by the suffocating grip of drugs, and the 5-foot-7 baller found himself in and out of prison for drug and robbery chargers, ruining any chance of making a name in a professional league.

The elder Payton also shared stories of the players who made it, like Jason Kidd, whom Payton Sr. took under his wing when Kidd was a 15-year-old sophomore at St. Joseph Notre Dame High School in nearby Alameda, taking the young prodigy to Cal-Berkeley to run ball with college guys in the area.

Payton II continues to thrive as his career as a Beaver comes to a close, garnering his second Pac-12 Defensive Player of the Year Award in as many seasons, while trying to lead the Beavers to their first NCAA Tournament berth since his dad’s last year at Corvallis in 1990. Though his son seems to be inching closer and closer to the next level, Payton Sr. knows his son won’t stray too far from the Merritt hardwood come summer.

“As soon as this is over with, he’s going back. So it’s not going to stop. It’s where he’s going to work out at. He’ll be in Oakland, California.”