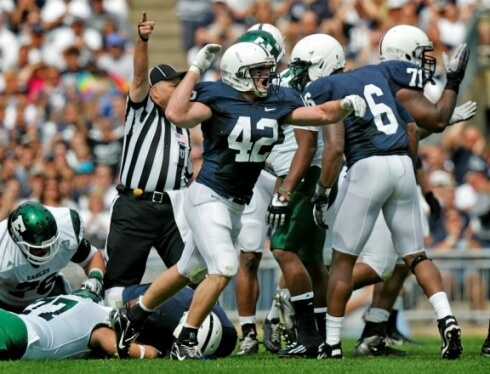 Never in the history of college football has a program been turned on its head seemingly overnight more dramatically than the Penn State Nittany Lions. For a half century, Penn State football was synonymous with Joe Paterno and held in high esteem for the way it went about business. Then a scandal of horrific proportions was exposed, and everything changed.

Suddenly, Penn State football is unrecognizable. No longer is a legend with Coke-bottle glasses and pants hiked up above his black shoes roaming the sidelines. The names now are firmly printed on the backs of those historically nameless jerseys. And the university itself is now more associated with horror and scandal as opposed to football and academics.

But football will be played this fall in Beaver Stadium. Some 110,000-plus will fill the bleachers, and thousands more will travel to support the team, just like they always have. However, things aren't and never will be the same.

Now, under new leadership and with renewed perspective, a team must come together amid the wreckage to redefine what Penn State football stands for. It's a daunting task for everyone involved, from the players and coaches to the students and the alumni. So what's on the horizon for Penn State football as the Nittany Lions embark on a season of uncharted territory?

The Good: Let's start with that new leadership, specifically the man tasked with replacing a besmirched legend. Upon initially hearing that Bill O'Brien would be the new head football coach at my alma mater, I admittedly was not exactly thrilled. All I really knew about O'Brien was that he was the guy yelling at Tom Brady on national television. While I enjoy a Michigan man getting put his place as much as anyone, that was the only impression I had of the man.

But since the moment he stepped foot on campus and wowed the crowd in his opening press conference, I've been nothing but impressed with Bill O'Brien. I honestly feel he is the right man to lead this ship, the man to set a new course for Penn State football while honoring the tradition of the program. And he's a man who truly knows what real adversity is. He won't be fazed by NCAA sanctions, the enormous shoes he must fill or the pressures that come with big-time college football because he faces something much more important each and every day caring for his son.

He's a man who has worked his tail off to get where he's at, and a man who seems to have all of his priorities in order. And he's impressed the Penn State community with his every move … and perhaps more importantly won over his players.

Speaking of his players, there are two standouts that have embodied everything Penn State is at its core. Senior linebackers Mike Mauti and Gerald Hodges are not only two of the most talented linebackers in the Big Ten and the nation, but they have been the rock that's held Penn State together. Both men are expected to be All Big Ten performers and perhaps All-Americans, but really it's their leadership that's been most important in these shaky times.

Hodges and Mauti have been two of the more vocal Nittany Lions, pledging their support to their university and stressing their commitment to the program. As a result, they've helped limit the defections and have inspired the underclassmen and recruits to stick around.

Without question, they are the leaders of a defense that should still be plenty good with Larry Johnson Sr. handling the defensive line, Mauti and Hodges anchoring the linebacker corps and carrying on the tradition of Linebacker U, and some talented players in a thin secondary. But more importantly, they are the leaders and role models Penn State needs right now, and my alma mater is lucky to have them.

The Bad: As far as football goes, this one is pretty easy. Losing Silas Redd to USC and Justin Brown to Oklahoma takes away the two most talented offensive weapons on a team that was already struggling to score points. Redd basically was the entire offense last season, as the running back became an All Big Ten performer and rose to national prominence. Now he'll be in Southern California, taking the ball from Matt Barkley with a chance to compete for a National Championship. Speedster Bill Belton will be the new feature back for Penn State, but expecting him to fill Redd's shoes is a bit much.

As for Brown, he would have been Penn State's leading returning receiver. And while he's had some issues with drops and never put up eye-popping numbers, he's a dangerous threat who has grown each season and most definitely has NFL potential. That leaves quarterback Matt McGloin with one less receiver, putting even more pressure on the redhead.

Oh, and that whole postseason ban for both the Big Ten title game and any bowl games isn't exactly a good thing. Neither are the scholarship restrictions.

The Ugly: Speaking of McGloin, the Penn State offense was putrid to watch last season, and that was with Redd, Brown and fellow wide receiver Derek Moye, who graduated. Now without any of those guys, not to mention the former walk-on Matt McGloin still under center, the offense may be uglier than Rosie O'Donnell compared to Megan Fox.

This offense will be relying mostly on underclassmen or inexperienced upperclassmen, and they'll still be led by a QB with walk-on talent who thinks he's Brett Favre. That could spell disaster, and it certainly won't be pretty to watch.

Of course, Bill O'Brien is an offensive guy, so maybe he can work his magic and get more out of this group than is expected.

The Prediction: Well shit, trying to predict what in the hell will happen to Penn State football in 2012 is like trying to climb Mount Everest in golf spikes and a bathing suit. Given everything surrounding the university and all the change taking place, who knows how the players will adapt? Who knows how the coaches will acclimate? Who knows how long it will take for the new system, the new culture, the new everything to take hold? I can envision this team winning anywhere from a measly four games to surprising everyone and getting to the double-digit victory mark given the relatively soft early schedule.

Worst-case scenario, things spiral out of control, the team finishes something like 4-8, the top recruits decommit, more players defect and Penn State football gets set back even further than it already has. Best-case scenario, this team uses the adversity as a rallying cry, comes together, gets behind the new coaching staff and surprises everyone with a stunning 10- or 11-win season, reaffirming the decision of the players who chose to stay and giving confidence to the recruits. Most likely, the season will fall somewhere in between.

Put a gun to my head and I say the Nittany Lions go a respectable 8-4, lose a few guys but also give hope that Bill O'Brien is putting Penn State back on the right track.

8 Replies to “The Good, The Bad And The Ugly: The 2012 Penn State Nittany Lions”