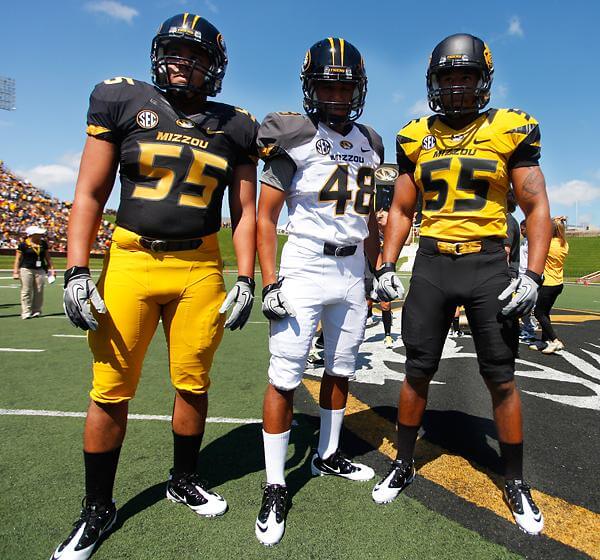 It’s like the first day of school. You know what you’re doing there, but it’s a lot different than you thought it would be and you have no idea where you are quite yet. That’s what moving to the SEC has been like for me watching my Missouri Tigers since they switched conferences. But if the Big 12 was high school, we’re definitely ready for the next step. Because for a school that sits in the top 5 in wins over the last five years, there's a lot of folks that don’t think they belong in college football’s promised land. But that’s pretty far from the truth.

For one, we’ve been to the top. Albeit, for a week, but we’ve been there. I like to think that Sam Bradford’s current banishment to NFL hell is because he blocked Mizzou from college football heaven back in ’08. His Oklahoma Sooners knocked Mizzou off in the Big 12 Championship Game, but something tells me there will be plenty of more shots for the roles to switch and the underdog role to be Mizzou’s this time.

However, for now let’s look at what’s ahead, and let me get pole position on playing spoiler for the masses on a team that’s going do a lot more of that on the field this year than folks see coming ...

The Good: This will be one of the most exciting teams in college football, simply because the Missouri Tigers will score — a lot. James Franklin is the most underrated, but highly productive, QB in the country. He ONLY tossed for 2,865 yards last fall, while running for another 981 as well. All in all, he was responsible for 36 total touchdowns himself (21 in the air, 15 on the ground) and did it all with a torn rotator cuff the entire year.

Well, he got that cuff fixed this spring, and he added the #1 high school player in the country in 6’6, 240 pounds, 18-year-old, Calvin Johnson-build-at-26 clone Dorial Green-Beckham to his arsenal. Tack that on to a receiving corps that returns six guys that scored from 40 out or further last fall, and the SEC will see an offense unlike anything it did last fall.

The Bad: Make no mistake about it however, the defenses this O will run into on the regular will be a lot faster than most anything they’ve ran across before. And they will see them without their fastest weapon in Henry Josey. The sophomore back was doing a better Chris Johnson imitation than Chris Johnson could pull off last fall, averaging eight yards a carry and racking up over 1,100 yards in only eight games starting before tearing everything in his knee that holds the top and the bottom of his leg together. He’ll be back next year, but lack of the run could dog the squad all year.

The Ugly: And speaking of dogs, there’s that whole thing to get used to as well. That’s one thing I’m seriously concerned for — the welfare of lovable mascot Truman the Tiger, because the SEC doesn’t do lovable in the mascot category. On any given week, he could be getting it hyped up on the sideline and cross paths with Uga in Georgia, Sir the Big Spur in South Cackalacka or the got damn War Eagle down in Auburn. That’s a lot different than a guy in a big yellow suit with a smiling tiger head on top of it. I’m just hoping Florida doesn’t run a real alligator out there, because that’s curtains if he gets lock on old Truman, and that’s way too much rookie hazing from the new conference mates for me.

Prediction: They’ll compete in the SEC East and be a lot better than thought. I’m calling for a more average season than usual in Columbia, MO, at either 7-5 or 8-4, with a few rough initiation games both for the Tigers and their foes, but a much better team right away than anybody saw coming.