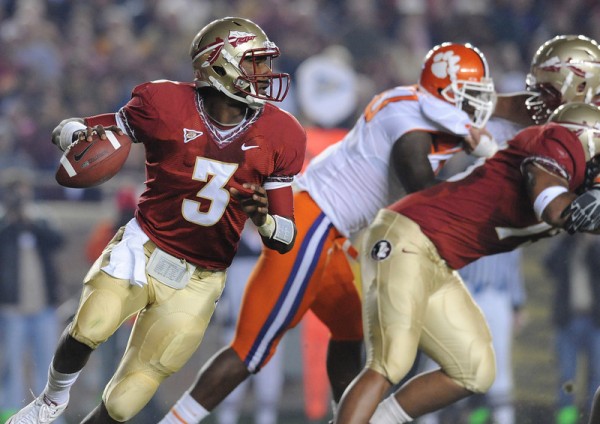 Of course, however, there is one sport the four of us have always faithfully agreed upon: Florida State football. You see, there was once a time when Seminole football stood next to breathing, less than two-dollar gas prices and the pride of purchasing an authentic throwback jersey one saw in a Fabolous video in terms of life’s greatest treats. Then, the Chris Rix era happened, Bobby Bowden got old and top recruits stopped wanting to come to Tallahassee.

Life is life, and in the same vein good times fail to last forever; bad times don’t either. For the past four years or so, Jay-O, Brandon, Ryan and yours truly have talked prior to the kickoff of college football and somehow convinced ourselves THIS would be the year the ‘Noles return to the mainstream mountaintop of relevance. It’s almost depressing in a sense, but the brotherhood built because of it is second to none. And you know what? In 2012, we actually believe what we’re telling each other!

I’ve prayed. I’ve confided in myself and the football gods, and I’ve come to the conclusion and solid faith E.J. Manuel will prove in 2012 he deserves to be not only mentioned with Tajh Boyd (Clemson) and Logan Thomas (Virginia Tech) in the ACC, but the nation’s premier quarterbacks. Costly interceptions last year were black eyes on an otherwise well-played season. Look for the senior signal caller to improve on decision-making and become a legitimate candidate for conference POTY. That and the running game has the makings of being flat-out deadly. Chris Thompson aside, who will be damn effective for Jimbo Fisher’s offense in 2012, it’s sophomore Devonta Freeman whom the entire conference should take note of. There’s going to be some unsuspecting defensive back who attempts to tackle him and he’ll either A) have his ankles and pride destroyed so badly he’ll lose at least 100 Twitter followers or B) have his chest caved in attempting to tackle Freeman. Either way, we’re looking at a potential Top 10 SportsCenter highlight.

Oh, and Mark Stoops will have this defense – who finished with the second best run defense in the country and fourth in total points allowed in 2011 – clawing for blood led by defensive end Brandon Jenkins and safety LaMarcus Joyner, the former of whom some scouts feel is all but a lock for the first round in the 2013 draft.

Excited yet, Noles fans? We should be!

The Bad: What could possibly go wrong this year? You mean, aside from the injury bug becoming a full-blown epidemic? Or E.J. Manuel completely wetting the bed and making FSU fans long for the Chris Rix days? THE CHRIS RIX DAYS!? Or the defense completely losing its identity from a year ago? Or Jimbo proving Bobby Bowden loyalists right when they begged and pleaded for Bobby to stay even though we all knew his time in the game had passed him by? Or Dustin Hopkins, for as talented a kicker as he is, blowing a last-second field goal dashing any hopes of relevant postseason play?

Or you mean completely going belly-up during a three-game stretch which has Florida State playing Clemson, South Florida and North Carolina State? Or – dear God – losing to Duke? Or losing to both Florida and Miami, thus missing out on the completely-fictional-but-still-dope-to-have-regardless “King Of Florida” crown?

See what I mean, there’s not much that could go wrong here. As long as we pray to our Peter Warrick jersey, everything is going to be all right. I promise.

The Ugly: Well, the ugly is this: basically starting out this season the same way the team did last year. Granted, they still made it to the Citrus Bowl and won. But who the hell wants to say they slept with the 14th hottest girl in school? Let Florida State completely bomb out and, as Eddie Maisonet says, “everything goes to hell in a hand basket.” There will be changes made to the program, and best believe it would probably start with the head coach. FSU is too talented and harbors too much hype surrounding the team this year to completely flop and piss it all away.

Just the thought of them even doing such is more uncomfortable than the last season of Martin.

Prediction: It’s BCS Bowl or bust for Florida State. While I’d love to proclaim they’ll go undefeated and play USC/Alabama/Hampton University in the BCS title game, Florida State will probably cough up one game at some point in the season. I hope I’m wrong with that last sentence, but consider this an insurance policy. It will be great, if we’re lucky, watching Virginia Tech and the ‘Noles in the ACC Championship game however.

Led by talent oozing out the seams on offense and a defense which already has a cockiness that believes it’s the best in the country, Florida State returns to dominance in 2012. They just have to. And if by chance they don’t, Jay-O, Ryan, Brandon and myself will be ready to proclaim 2013 is the year just in case.

7 Replies to “The Good, The Bad And The Ugly: The 2012 Florida State Seminoles”

The Good, The Bad And The Ugly: The 2012 Florida State Seminoles

A Sports Scribe Big Blue Dynasty? Can This Be The Era Of The New Y…
Football The Good, The Bad And The Ugly: The 2012 Wisconsin…
7