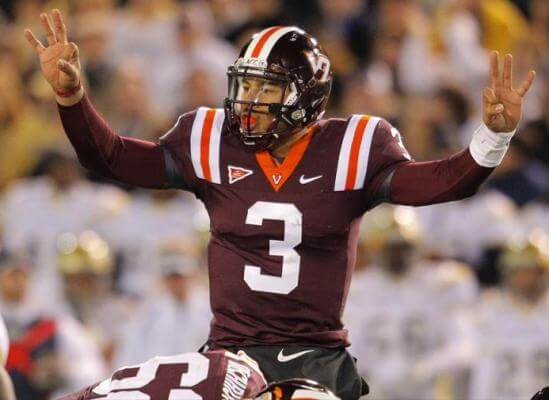 In Blacksburg, VA, the time for the hot summer days in an evacuated college town is coming to an end. Everyone’s all moved in and ready for the school year.

Right near the Appalachian Mountains, the orange and maroon is everywhere. The student body is painting cornhole boards. The alumni are booking the nearest hotel rooms.

At Tech, football season is the top of the list when a student enrolls. Like many big state schools, Saturdays in the fall are the event. A loss depresses the campus for a week until the next game. A win sparks the fuse of celebration and happiness for the week.

Every other sport could be thrown away. As long as football survives, so too do the Hokie faithful.

With a home opener against the other Tech (the one in Atlanta) set to kick off on Monday night, it’s time to take a look at what needs to go right for the Gobblers.

Or, what could go wrong.

The Good: 19 consecutive bowl games. Eight consecutive 10-or-more-win seasons. Despite not being in a power football conference or consistently in the limelight, the Hokies are usually pretty good.

Since joining the ACC, they’ve had their way, winning half the league’s championships. They’ve produced some high-talent players, and the momentum has been steady.

With the topsy-turvy manner that college football seems to go, Tech fans can’t be too upset at their recent success.

However, the Hokies have only made one national championship game appearance. Another would be at the top of the list for Frank Beamer and company.

The very best case for this year’s team is to run the table in the regular season. Recently, Tech has scheduled some heavy hitters early in the season to give them a boost in the fateful strength of schedule category.

With the two strongest teams on the schedule coming in conference play (Clemson, Florida State), VPI will most likely need to win out for a chance at the crystal football.

It’s a long shot to make it to the sport’s biggest stage. However, with star quarterback Logan Thomas capable of doing things on the field that most can’t, they have  a slight chance. After all, the only title appearance came with a great talent behind center.

Consistent success has Hokies fans hoping that one year everything will come together in a perfect storm.

The good would be if that year could be this year.

The Bad: Essentially, the status quo is determined to be “the bad” in this preview.

Another 10-win campaign and one of the ACC’s top bowl slots is hardly anything to frown about.

Yet, that’s where it stands with Tech.

In this category, winning the Coastal Division and losing in the ACC title game to Clemson or Florida State would be less than expected from those within Blacksburg.

It’s ACC title or bust every year. And while the tradition the team has established can prove to be a catch-22 when it comes to expectations, that’s the curse of success.

After last year’s demolition at the hands of Clemson in the ACC Championship Game, it would be disappointing to fall short again.

A New Year’s Eve Chick-Fil-A bowl appearance against the likes of Auburn, Florida or Tennessee would be far from riveting.

The Ugly Last season, the Hokies headed across the state to meet another state university with the division title on the line. They thrashed the other team, 38-0.

Tech has defeated that school eight consecutive times, and 12 of the last 13 meetings. It’s safe to say the alumni are pretty happy with that streak of dominance in the great Commonwealth of Virginia.

Beamer and his staff are pretty pleased with it as well. The battle for in-state recruiting has gotten better since the new coach at the rival school has been in charge.

Yet, the scoreboard has remain slanted in the Hokies’ favor. It can be tough to get from under that scoreboard on the prospect trail.

Not winning 10 games could be excused. Not making the ACC title game might be chalked up as bad luck.

Losing to the school two hours and 38 minutes northeast?

That would be the ultimate ugly for the 2012 Virginia Tech Hokies.

The Good, The Bad And The Ugly: 2012 Virginia Tech Hokies

Football The Good, The Bad And The Ugly: The 2012 LSU Tiger…