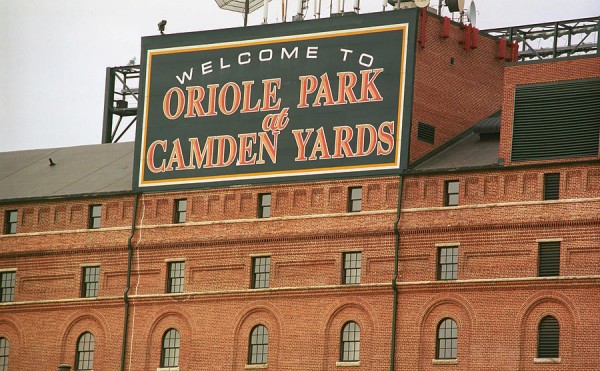 As an American male who's been through the life-altering phase that is college and still in my mid-20's, my segment of the population has been drunk more times than we care to remember. Consider it a prerequisite before entering your 30's. Most times, each individual occasion being drunk is pedestrian. By that, you have a few drinks with friends, get buzzed and eventually sober up. But it's the other times, the "Hall Of Fame Drunk Moments," if you will, that we remember and hoist those red plastic cups into the rafters of life.

And thanks to the most unassuming of culprits, my buddy Brad (his last name is Pitt, I swear on everything) are unofficially official Baltimore Orioles fans.

The O's haven't really been much to brag about since Brady Anderson and the mid-90's, which means coming up on cheap tickets (or free if you've got a boss who's not a huge sports fan) isn't really the most difficult thing. Brad hit me up days before the game asking if I wanted to go to see the Orioles. Naturally, the first question was to find out who they were playing. In something that would play out to our benefit, the Oakland A's were in town. Specifics were ironed out, and a few days later, we make the 45-minute trip from D.C. to Baltimore not knowing really what to expect. We arrived two hours before there first pitch, mainly so we could hit a bar and pre-game like most people who go to A's and O's games engage in.

Now, for the life of me, I cannot remember the name of the spot we entered, but just know it was handcrafted by the gods. Long Islands were $2.50, other mixed drinks were no more than $3.50 and beers were $2.00. And the appetizers were half off already being half off. See what I mean: handcrafted by the gods. Now that I think about it, maybe it wasn't meant for either of us to remember the name of the place in order not to ruin the moment. We downed everything from LIT's, to Jack and Cokes to beers to appetizers. We spent $12 individually and lived like kings.

Two hours later, we stumbled out of the bar to head to the stadium when we decided to look at our tickets and see where we were sitting. As luck would have it, it was in the nosebleeds in right field. Not that it mattered, however, the tickets were free.99. We enter the stadium and before heading to our seats, we stop and grab two more beers just for the hell of it (our most expensive purchase of the day). Maybe it was those same higher powers that led us to that bar, or maybe it was because we were more buzzed than the cast of Jersey Shore, but Brad and I decided to test our luck and walk towards center field and to see if we could pull off the greatest finagle of all time (ok, not all time, but definitely top 75). I ask the center field guard if we could sit in those seats since the stadium wasn't exactly packed.

"I don't care. I'm not about to stop you," said the attendant.

The next nine innings went by flawlessly as we coasted down from the drunkeness by watching a pretty entertaining game on the field and off it. This couple literally made out for two straight innings without coming up for air, proving they were two people in Camden Yards more inebriated than us. Or maybe they were high; either way, they weren't sober. There's no way I could kiss even the most beautiful woman in the world for 50 minutes nonstop. Anywho, and by the time the game was over, Baltimore won 9-6 improving their record to 24-53.

Two years later, I still find myself thinking about Camden Yards, the Orioles, the city of Baltimore and The Wire and will forever remain in their debt for the time they showed Brad and myself. If you're still reading at this point, I extend my most sincere appreciation. May your Friday night Happy Hour be as fruitful as your work week has been stressful. That's all life is about: work hard and playing harder. Just know, unless you attend that beautiful no-name bar hand-crafted by the gods of Avon Barksdale, Chris and Snoop and McNulty, it will forever pale in comparison to the afternoon/evening of June 30, 2010.

5 Replies to “The G.O.A.T.: Happy Hour With The Baltimore Orioles”