OPTIMIST’S GUIDE TO THE NFC EAST

Kevin Durant spurned his hometown Wizards. Something has to go well for the fans in the D.C area. No worries, Washington is here to save the day.

Kirk Cousins is back and playing for a new contract, and RGIII is no longer there patronizing the fan base, teammates, and coaches.

Newly acquired Josh Norman is looking to bring his All-Pro skills to an already established group. If Norman morphs into Batman on Sundays, there is no way in hell any team beats Washington. In the role of the caped crusader, his superb play will rub off on fellow teammates such as Cousins, DeSean Jackson and De’Angelo Hall, giving Washington the super powers to hoist the Lombardi trophy. -RH

Now that the ghost of Chip Kelly has moved on to the Bay Area, the Eagles faithful may be in for a treat. Newly acquired Chase Daniel will attempt to channel his inner Jeff Garcia as the starting quarterback. With hopes of returning to the class of the NFC East, the offense has the firepower to do the job. If Daniel gives the Eagles steady play at the QB position, it will ease the burden on a defense that was among the worst in the NFL.

As the offense looks to make noise, the defense hopes to mirror the output let by Malcolm Jenkins and Connor Barwin.

For a team that has not won a Super Bowl in its existence, the proverbial monkey will be lifted off of their back.

To honor the long-awaited championship struggle, I'll treat Eagles fans to a cheesesteak from Max's and the finest of body oils you can find on Germantown & Erie. -RH

One thing that I’ve learned over the years is that you never count out the Giants.  For the first time in several seasons, Big Blue bolsters solid units on both sides of the ball.

Adding defensive playmakers such as Janoris Jenkins, Eli Apple, and Oliver Vernon in the offseason will help a depleted unit that finished last in total yards. It’s no secret that the Giants can score the ball, but if the defense manages to play stout coupled with the ability to score at will, Eli Manning may be rewarded a statue near the Hudson River for bringing a third title to the New York metropolitan area. -RH

There are a lot of Cowboys naysayers going into this season, and there are reasons for widespread negativity. They don’t have an elite pass rusher, Tony Romo is hurt, and they are coming off of a 4-12 season. Despite the aforementioned statements, the Cowboys can win Super Bowl 51.

With Romo out due to injury for the next 6-10 weeks, preseason sensation Dak Prescott will have the keys to the offense. Prescott will look to channel his inner Tom Brady as he looks to go from an unknown to Super Bowl hero.

Just as the Patriots did in 2001, the Cowboys will look to play Cinderella. Crazier things have happened in the NFL. Don’t be surprised if Dallas wins its first Super Bowl since Donald Trump showed the world how to eat stuffed-crust pizza. -RH

PESSIMIST’S GUIDE TO THE NFC EAST

Kirk Cousins is Washington's quarterback. Like, THE Kirk Cousins. Like, they signed him to play quarterback for their football team on purpose. He’s certainly not the worst starting quarterback in the league, but boy is dropping the franchise tag on him a stretch.

As long as Dan Snyder is here, all of the bad things will happen to this franchise. They even lucked into Josh Norman who has spent training camp getting torched by the artist formerly known as DeSean Jackson. The Cousins and Norman signings have a chance to end horribly for Washington, and that’s an exciting thing for everyone. -KM

Nobody likes the Eagles. It’s not even a certainty that people that like the Eagles like the Eagles. There is no bigger standard for sucking at being an NFL franchise than Philadelphia. Even when this team was good, they couldn’t win. 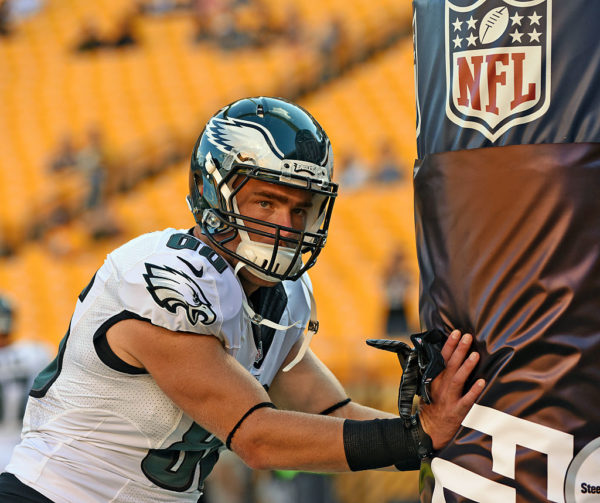 Their head coach, Doug Pederson, is brand spanking new to the position. This confirms the team will come out like gangbusters in the first couple weeks and then quickly fade and Pederson will get booed into the Delaware River sometime around Week 12.

Also, a street vendor was outside of Citizen’s Bank Park in mid-August selling knockoff Zach Ertz t-shirts. He was also selling Trump t-shirts. It’s going to be that type of year for the Eagles. -KM

The Giants are officially bad. They're dead. The ridiculous strokes of luck that landed two Super Bowl rings on Eli's hand have finally ended. This is just a bad football team.

The worst part about the New York Football Giants is that they're the kind of bad football team where you can't even rely on them to be hilarious. They're just good enough to score and make games interesting, but their defense is dreadful, and any injury to OBJ spells the end of any hopes this team has of winning any games.

Despite being bad, however, they'll get way too much shine because the rest of this division is terrible. The Giants will probably win a game or two that they shouldn't. This ensures we'll have to hear all about how you can never count Eli out until they're officially eliminated in Week 15 or 16. Yuck. -KM

Romo got hurt in the third preseason game and will miss 6-10 weeks. This is everything you need to know about why the Dallas Cowboys aren’t going to win Super Bowl 51. -KM

One Reply to “NFC East: The Optimist's & Pessimist's Guide”