If you haven't heard, the Cleveland Cavaliers are down 2-0 to the Golden State Warriors in the NBA Finals, and odds on them making a comeback with the online bookmakers are getting longer by the second. The series looks hopeless for the team in Wine and Gold, and their deity wearing No. 23 appears to be headed for yet another defeat. This is the information given to us, and we must accept the possible inevitability of LeBron James' plan being thwarted by a budding historic team, but a team filled with individual players inferior to him.

There are a lot of people, myself included, looking for ways Cleveland can have a chance to avoid the broom. The painful resolution is that though LeBron is not the only one at fault, he does share some blame. More importantly, LeBron is the only one in this series, maybe the entire league, that can increase his play and affect a game in so many facets that his team's shortcomings are under his protection. In the basketball realm, he is a god.

Before I go further into this post, allow me to provide background information. Multiple times a week during this NBA season, I have phone calls with TSFJ co-founder and actual legend, Dr. Kenneth Masenda. They started with Steph being superhuman at the beginning of the season, and we coined his run as "The Worldwide Tour of Love And Disrespect." But both of us are basketball fans and lovers of the game's intricacies, so the conversations usually include general topics, as well. We are also loyal subjects to The King, so we analyze him a lot. We have surmised that LeBron in the Finals is a different and better player than LeBron in the postseason, who is far better than LeBron in the regular season. Today, Dr. Masenda asked me a question as we were debating what LeBron needs to do.

"If he is capable of God Mode, doesn't he have an obligation to go God Mode?"

I didn't answer him. I immediately started writing this post because I am conflicted. The short answer is, of course, "yes." If he has the ability to step in and step up as the demigod he still is, then he should do so.

What made Leonidas more than a man is the fact he did so much with so little. Even with insurmountable odds, he didn't return home until his lifeless body was carried back to Sparta on his shield. As sports fans, we want our immortals to expend every bit of their gifts in the name of victory, especially if in LeBron's case, we expect him to win. Rather, we expect someone as good as him to never lose. But if you look at the screenshot of that text thread, there is an underlying point about LeBron's legacy that the immediacy of right now will not let us accept. 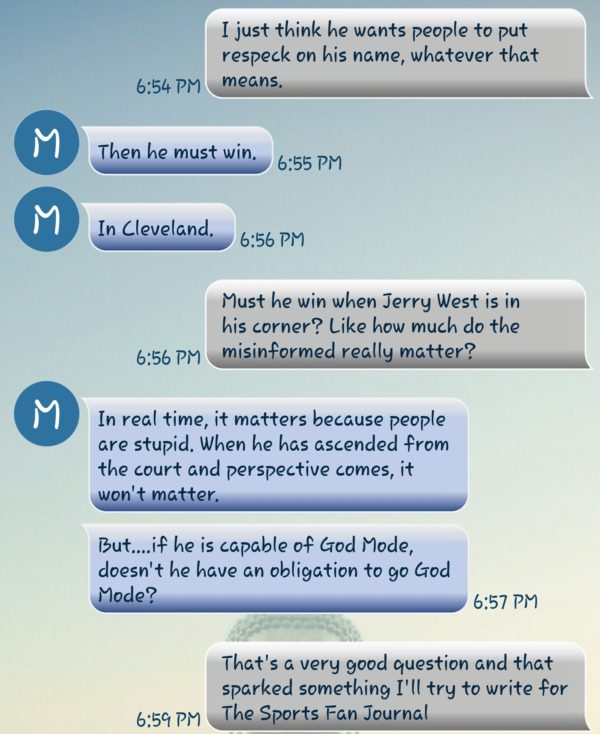 At this moment, LeBron owes nothing to the game of basketball. As it stands right now for most people, he will be who he is to them from now and into future generations. So for us to ask him to be superhuman one more time is less about LeBron and far more about our selfish desires to always be wowed by something we barely understand.

This is not to suggest that LeBron no longer wants to win. Nor am I excusing his turnover-riddled play in the first two games of this series. But he does not need to play better to enhance his legacy as an individual player. Sure, it looks better to have that accomplishment. But if there are people still questioning whether or not LeBron belongs among the sanctified hoopers throughout history, then he nor we shouldn't address those people.

In a vacuum, a fifth Finals loss looks terrible. After LeBron finally says goodbye, it will not matter. We will sing songs. We will be inspired by that which we do not fully grasp. And maybe that was LeBron's plan all along.