More than a week has passed, and the realization that LeBron James is a three-time NBA champion has truly sunk in. By defeating the NBA record-breaking Golden State Warriors, he added his most prized achievement to a career that is among the most accomplished in NBA history.

As the final buzzer sounded and the reality of the moment was clear, he jumped in elation, as teammates met him with embrace. Eventually the magnitude became too much to stand, and he fell to the floor, where he cried tears of joy and redemption. That emotion, the elation and the tears are about so much more than an NBA title. What LeBron James accomplished that night is bigger than the game of basketball. Here are three reasons why:

To this day, most basketball fans remember exactly where they were and what they felt on July 8, 2010, when LeBron James informed that he would be taking his talents to South Beach. I watched with one of my best friends from graduate school, as this took place during the summer in between our two years of study. Both of us were smart enough to complete an entire year of graduate school. Neither of us were smart enough to predict what would take place that night, nor the aftermath of it.

I’m proud to say that I’m one of those “LeBron James fans.” Simply put, my loyalties do not rest with any particular NBA franchise, only to my favorite player. In 2003, that player became LeBron James. For the past 13 years, I’ve been privileged to watch the legacy of his career (and life) unfold. "The Decision" was tough to watch, but just as I would treat a loved one, I respected LeBron’s choice and continued to support his progression.

LeBron’s time as a member of the Miami Heat is well-documented: four NBA Finals appearances, two NBA championships, two Finals MVPs, among an array of other accolades. What I find most compelling about the South Beach years, though, is the context it can, and in my opinion should, be viewed in. I briefly mentioned my time as a graduate student. Prior that that, I spent four years completing my undergraduate studies. In summary, I was able to leave the comforts of my home as an 18-year-old kid, experience life and learn recipes for success in a space that was conducive to that development. I view "The Decision" as LeBron finally going away to college, as he's mentioned a few times.

As an Akron, Ohio native who was drafted directly out of high school No. 1 overall to the Cleveland Cavaliers, LeBron never had the chance to do what many of us have done, and I appreciate the way he used this time. Like a college student, he studied and tried on new skill sets and identities, made a few mistakes and learned from them, and tasted the joys of hard work and success. We should look back on LeBron’s time in Miami as we look back on our time in college — some of the best years of our lives. And while we view those years with good vibes and nostalgia, we know that it is but a chapter in the evolving book of our lives. I believe LeBron knew that as well. 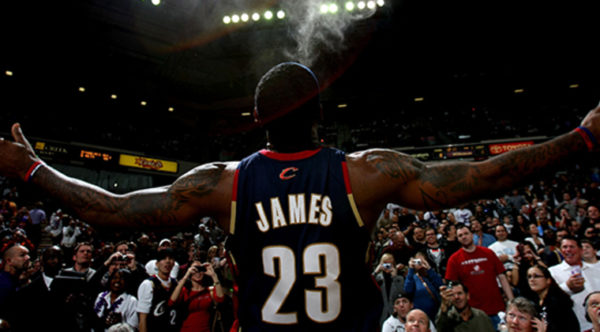 I would imagine that a large percentage of the fans who remember their whereabouts during "The Decision Pt. 1" also have some idea of where they were during "The Decision Pt. 2." I was chaperoning a group of 38 high school-aged young men during a summer camp I host every July. When the news broke, I celebrated and watched the reaction of our next generation of youth, who are experiencing the world and learning not just from their parents, but from those in the public eye whom they aspire to be like. Admittedly, most of the kids wanted him to stay in Miami. They were mesmerized by the shiny appeal of the King and Vice City, and quite frankly perceived this scenario exactly as we might expect teenagers to. They weren’t prepared to see the bigger picture. I’m thankful that LeBron was able to, as I believe that those kids (now two years older) can look at his decision to go back to Cleveland and see why it was the right thing to do.

In my opinion, it was time for LeBron to go back home. He went away to college, matured and added valuable tools to his kit. None of that development would be meaningful if he was not able to share victories with those who had meaning to him. The Decision Pt. 2 was about community. It was about Ohio. It was about hope for those who had been around long enough to know the true strain of being a Cleveland pro sports fan. It was about inspiration for those young enough to see LeBron James as someone they can learn life lessons from.

The lessons are that that you never become too big for home. You learn from others while teaching them the value your community instilled in you. You use your new talents to go back and grow your community. Above all, you grow up, and you reach back to show others that they have the ability to grow like you. It was a decision I’m thankful he made, and I have no doubts the state of Ohio is thankful as well.

Reason 3: The Who And How

Somewhere between 2009 and 2011, LeBron James took over the title as “the best basketball player in the world.” Despite the criticism he’s been subject to in his career, there was a collective understanding in the sports world that he was the best, and LeBron knew it as well. But sometime during the 2014-2015 season, that recognition started to crumble, as a new star emerged in Steph Curry. Curry wowed fans with his incredible shooting ability, his family became America’s favorite and, to top it off, he hoisted the NBA championship trophy during LeBron’s first season back in the Land. LeBron’s frustrations began to show this season, as many started to voice what the masses were suddenly thinking: “Steph Curry has surpassed LeBron James as the best basketball player in the world.”

This did not sit well with the King, and no moment illustrated that better than the blocked shot and stare-down in the Game 6 of the NBA Finals.

Not only did LeBron lead the Cavs from a 3-1 deficit to defeat the Golden State Warriors for the Cavs’ first NBA title, but the comparison of his play in the Finals vs. Steph Curry’s was enough to reshape thoughts that the King had been dethroned. Many believe that LeBron James is the best basketball player in the world again, and truthfully, he always has been. More importantly, people now believe in his ability to do the impossible.

An inner-city kid from Cleveland can become the biggest youth basketball prospect ever. He can be drafted to the NBA No. 1 overall to the hometown Cleveland Cavaliers. Although embodying greatness, he can struggle to find true success and need to take a step away from home to be molded into what he was truly destined to be. Finally, he can come back home, give his city a joy it's never had and do it in a way that has never been done.

Others will be, because LeBron James was. This journey is far bigger than the game, and LeBron James is proof of that.