Women’s college basketball has produced a vast number of first-class guards in this 21st century that have lit the hoops scene on fire and have attracted a whole new audience of older and younger basketball fans – regardless of gender – that has elevated the sport. Some of those admirable players included Connecticut’s Sue Bird and Diana Taurasi, Notre Dame’s Skyler Diggins, Louisville’s Angel McCoughtry, Duke’s Alana Beard, LSU’s Seimone Augustus and Washington’s Kelsey Plum. However, the current 2018-19 season has given us a ton of thrills and delights in large part due to three stunning guards – Louisville’s Asia Durr, Notre Dame’s Arike Ogunbowale and Oregon’s Sabrina Ionescu. Each player has put on a sterling performance piece every time they step on the hardwood.

The smashing three of Durr, Ogunbowale and Ionescu have sparked debates about who is the game’s best guard and which of the three should be player of the year; creating the all-consuming conversation of this fun season. Honestly, the last time there was a trio of phenomenal guards this good in the women’s game was in 2004 with Taurasi, Augustus and Beard. As a senior, Taurasi led UConn to their third straight national title, took home the NCAA Tournament’s Most Outstanding Player, and took home the Naismith College Player of the Year. In her sophomore season at LSU, Augustus averaged 19.4 PPG and 6.0 RPG while leading the Tigers to the first of her three consecutive Final Four appearances. As a senior, Beard won the Wade Trophy, Wooden Award and AP Women’s Player of the Year while also leading the Blue Devils to the Elite 8.

Each perimeter star brings something unique to the table. The 5-foot-10 Durr can put the ball in the hole in more variety ways than any player I’ve seen since Maya Moore. The senior combo guard is as smooth and slick as they come, able to create space between her and a defender with her in-and-out crossover like a pro, and knock down shots off the dribble and in catch-and-shoot situations that likely end in a barrage of deep threes. Just ask Ohio State last season, when Durr went Steph Curry-like off for 47 points and nine three-pointers.

The lefty uses screens well and with her high arcing shots, it makes it hard for any defender to block her shot. Yet if you look a little deeper into her game, you might see a touch of James Harden there. Durr employs her step-back and jab step fluently, and might have the best mid-range jumper in the nation, a lost art in basketball in this era of spacing and three-point shooting. No matter if it’s against double-teams, triple teams, zone defenses or tight one-on-one coverage, Durr will find a way to get her shot off, one way or another. Averaging 20.9 points per contest this season, the 2018 ACC Player of the Year (18.7 PPG, 2.3 APG, .443 FG%, .415 3PT% in 2017-18) is looking to lead Louisville back to the Final Four, where they lost to Mississippi State in an overtime classic. Durr and the Cardinals are also defending their ACC regular season and tournament titles from last year, yet her conference rival in Notre Dame might have something to say about that.

A major reason that Notre Dame is in the position to defend its national championship is because of Ogunbowale’s late-game heroics. In both the 2018 national semifinal against the undefeated and mighty Connecticut and in the final versus Mississippi State, the 5-foot-8 two-guard nailed buzzer-beater, game-winning shots that not only lifted the Fighting Irish to the school’s second national title, but set the sports world into a state of hysteria. Ogunbowale delivered on the biggest stage with great aplomb and got her inner Mamba on, channeling memories of her idol, Kobe Bryant, in the clutch. Ogunbowale’s  junior season was a coming out party, but this year the senior is trying to leave her mark as one of the best guards ever in women’s college hoops.

If there’s a way to describe the AP Preseason All-American’s game, it’s relentless. Always in attack mode, Ogunbowale (21.0 PPG, 4.9 RPG, 4.1 APG, .451 FG% this season) might be the most exciting offensive player in the country. If you want her to break you down one-on-one, she’s your gal. How about a woman who thrives getting into the paint to draw contact (averaging six free throw attempts per game), finishing at the rim strong, shaking and baking on the perimeter to get her shot off from anywhere, and consistently serving as a threat in transition? Arike checks all those boxes.

If there’s one player that can match up with Ogunbowale toe-to-toe, however, it’s Durr. Whenever they play one another, it’s truly a battle to see who can come out on the better end. Last season, two of Notre Dame’s three losses were against Louisville, where Durr’s overall play topped Ogunbowale’s. Push forward to this season and in a much-anticipated No. 1 (Notre Dame) vs No. 2 (Louisville) regular season showdown back on January 10th, both ladies elevated their games to a considerable draw. Ogunbowale had an efficient 30 points, six assists, five rebounds, two steals, and made all 12 of her free throws. Durr countered with 29 points, six rebounds and two assists, but it was Ogunbowale’s team that came out with the 82-68 victory.

As the race to March picks up, don’t be shocked to see these two collide in the ACC Tournament as well in the Big Dance. As the two most dynamic players in the country duke it out on one side of the country, an advanced playmaking guard in the West Coast is out there virtually making history every time she steps on the court. There’s no female in the college game that impacts the game in the way that Oregon’s Sabrina Ionescu does. Whether the 5-foot-11 junior has the ball in her hands or not, she’s always a threat and needs to be accounted for. While she’s not the most athletic or the quickest player – though certainly a top-notch athlete – a cleverness and competitive spirit steer her game.

When she’s playing off the ball, Ionescu’s instincts around the rim enable her to anticipate which way the ball will bounce for rebounds. She also moves smartly to get into catch-and-shoot positions. She can shoot the three, but her pull-up game from mid-range is first rate. Instead of getting to the basket with nifty moves, she uses craftiness in place. As a passer, there’s no player that touches Ionescu. Her patience in reading a defense and finding the holes is Peyton Manning-level stuff.

Oregon is the highest scoring team and No. 1 three-pointing shooting team in the nation, averaging 89.7 points per game and shooting 44.1% from three. The 2018 Pac-12 Player of the Year is the main catalyst for that because of her constant penetration-and-kick game, steady screen-and-roll play and ability to get the ball to her teammates in accurate scoring positions. She holds per game averages of 19.7 points, 8.2 assists (second in the nation), 7.1 rebounds, to go along with stellar shooting both from three and at the charity stripe.  Her 298 assists last year as a sophomore, a school single-season record, proves that she’s a distributor. Her 17 dimes on December 2nd against Long Beach State is just as much a testament to her passing skills.

Ionescu is not called “the queen of triple doubles” for nothing as she sits with the most career triple-doubles (16) by a man or woman in NCAA Division I history. The 2019 National Player of the Year frontrunner is the rocket that fuels Oregon’s pristine attack and hopes that play can carry Oregon to the program’s first Final Four come March.

As three players who are expected to be franchise-caliber players in the WNBA, women’s college basketball is in a great place with this spectacular triumvirate carrying the way. Just make sure you check out Asia Durr, Arike Ogunbowale and Sabrina Ionescu while they’re still on campus before plying their trade to the league this spring. 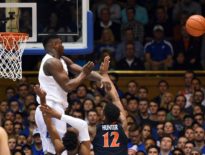 Basketball TSFJ’s NCAA Box And One, Weeks Fourteen And …
Basketball Flash Week: A Celebration of the Greatest Shot-Blo…
0