On Sunday night, the WWE converged on the Barclays Center for its second biggest night of the year, SummerSlam. A mid-year tradition since 1988 when it debuted in New York City at Madison Square Garden, the symbolic mid-way point on the calendar strongly resembled its peak at WrestleMania four months ago. There was Brock Lesnar and Roman Reigns headlining the card, with Charlotte Flair again leaving as champion and A.J. Styles continuing to bring feuds from his past into his WWE Championship reign resume as well.

Another part of the card that remained the same was the opportunity to highlight the promotion’s biggest acquisition, arguably ever, in Ronda Rousey. After introducing the legendary UFC champion to the world of pro wrestling in New Orleans at WrestleMania 34, she took another step in the direction of defining the WWE as one of the most female-forward entertainment outlets in the country. Over the past decade, Rousey placed herself at head of the line when it comes to women who win in the arena of combat sports and entertainment, something her showing at SummerSlam raised the stakes within even further.

It has been a swift ascension up the women’s ranks for Rousey, with two of her three pay-per-view matches coming for the Raw Women’s Championship. It has been a momentous rise unlike anything that's been seen in the women’s division before it. She mowed through competition in a fashion befitting ‘the baddest woman on the planet’ and the most legitimate fighter to ever regularly compete in the WWE. It is a run that best resembles the rise of Bill Goldberg in WCW during the late 90s or Brock Lesnar’s Smackdown debut in 2002.

In her solo spotlight on Sunday, she decimated then-champion Alexa Bliss in a fashion that seemed very legitimate. After Bliss initially started the match hiding behind the rules and referee, Rousey woman-handled Bliss for the better part of the four-minute squash match. Rousey spent as much time catering and prodding to the crowd than digging into an in-depth wrestling contest, as she extracted revenge on Bliss for stealing the Raw Women’s Championship from her grasp the prior month.

Soon Rousey locked her signature arm bar in a vivid fashion that makes one hope that the plan was to exploit just how double-jointed Bliss actually is, submitting her to win the title. A raucous, maybe too over the top but legitimate, celebration followed with Rousey leaving as champ in a signature moment for the show. Every major media outlet recognized it and got the company the exposure it desired by having the mainstream star on-board. Mission accomplished.

However, with the company’s biggest draw holding the Women’s Championship, where do we go from here? The problem with such dominant characters holding championships is two-fold. It can be impossible to line up fitting competition for them that is sellable even by pro wrestling’s long leash of believability. Also, there is the danger of them wearing out their welcome with a fanbase that has become more fickle than ever when told who their superstar is to get behind. Ask John Cena, ask Roman Reigns.

There is also the issue of too much, too soon for Rousey. She is not only growing as performer, but within the realm of being a character too. Too often she runs too hot or too real. Her true enthusiasm and joy can spoil the bad ass character she is meant to portray. This often gets mixed up in her skill with the mic as well, as her promo skills could desperately use the touch of the late, great Dusty Rhodes who helped so many of the current roster find their character during their time at NXT.

Rousey is too big of a star for the slow burn of grooming through the developmental territory. Since debuting at the Royal Rumble, her presence has loomed over every Monday Night Raw telecast. Even when she has been off TV to continue her training and keep the novelty of her appearances up, she has been ever-present in advertisements and promo packages. Now that she has the championship, the expectations have yet again ramped up and she will be accountable for answering to them. She will no doubt headline the upcoming first-ever women-only PPV, Evolution, and will be prominently featured in the WWE Network’s Australian special event, WWE Show-Down. 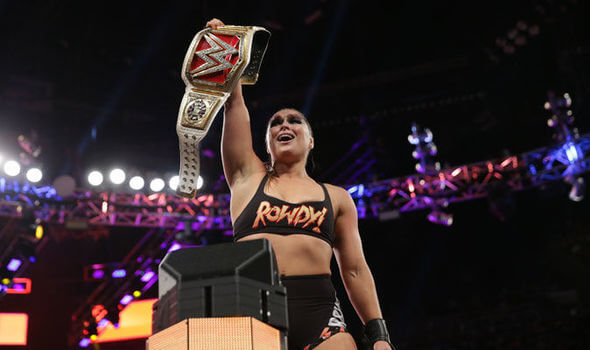 Speaking of Evolution, another issue that remains is how to keep the now-Champion prominent without putting the balance of the rest of the women’s roster at risk. Since the women’s evolution era set in a few years ago, the WWE has done a great job of not only growing their female superstars to be on-par with their male counterparts, but also keeping the Championship moving often enough to lend credibility to their star turns.

With Rousey holding the title now, there is an issue about how to continue to keep their stars strong when there is an end to their ascension when pitted against Rousey. Could the opportunities for other women on Monday nights be clipped without the boost that a title run can bring? The rise of women’s wrestling is at an all-time high right now and with Rousey capable of carrying her own star without a title attached to it, it gives the WWE plenty of options.

These are all first world problems of the best type, which I am sure that Vince McMahon, Triple H, and Stephanie McMahon are more than glad to see. However, the stakes are high around this initial title run for Rousey. Lets just hope that both her and the company are prepared to make the most of it.