The Major League Baseball season is closing out its first month of the 2016 season this weekend, and while the first 30 days of the season tell very little of what the big picture will be once it is fully painted, it does provide a backdrop for early season predictions. Entering the year, fans of the two respective clubs in the city of Chicago were receiving very different pieces of news regarding the prospects for their teams this summer.

On one hand, there were the Chicago Cubs, the breakout team of 2015 and the darlings of the winter headlines as well. World Series or bust was the rallying cry, and for the first time in the sports eternity, it was a valid claim.

On the other hand, there were the Chicago White Sox, an oft-forgotten team not only within it division but in its own city. For the past few years, it has been a "hope for the best" type of scenario surrounding the Sox, only to quickly see those wishes extinguished in the flames set off by the Detroit Tigers and the current World Series champions in Kansas City.

Yet now while the city sees its only (now temporarily) reigning champion in the Blackhawks head home early and moves past a frustrating year from its NBA representative, baseball is proving for a change to not only be a source of hope in the Windy City, but is delivering on both promise and the element of the unexpected. Both the Cubs and White Sox are sitting at the head of the table in the National and American League Central divisions, respectively, and they also possess the best records in either league, checking in at a combined 31-11 headed into the weekend.

For the Cubs, this outcome was expected. They were regarded as the best team in baseball throughout the winter and have done nothing to dispel that notion thus far. They have yet to lose consecutive games on the season, and this is in large part due to the consistent dominance of their starting pitching. Jake Arrieta has remained at an elite level, winning all four of his starts thus far in April with a 0.87 ERA, which includes his second no-hitter in less than a year’s time. The historic stretch he began last year has carried over into 2016 and seriously began to lend credence to the fact he may be threatening the iron grip that Clayton Kershaw has carried as the game's top pitcher over the past half decade.

And Arrieta is not alone in producing elite early results off the mound for the North Siders, as Jason Hammel (who carries a 3-0 record) and Jon Lester both join him in the league’s top 10 in ERA as well. Chicago's pitching has been the stingiest offering off the mound in the game this year, holding opponents to a .199 batting average against.

What’s more impressive about the Cubs early year output is that it has remained consistent despite the fact that they have not truly begun to hit in the fashion that was expected of them yet. Only Dexter Fowler (who is off to scorching-hot start, including a .368 batting average and 13 extra-base hits) carries a batting average north of .280, and for a team whose power was expected to be its driving force, only Anthony Rizzo (eight home runs) has truly met expectations in that department. Otherwise, the Cubs are a somewhat surprising fifth the NL in home runs, despite checking in at second in total runs scored.

But if a team can win at the rate the Cubs are by leaning on arguably their secondary strength in pitching, it reasons to believe they will be an outright terror when the weather (and wind) warms up in Wrigley over the next month. Despite the unfortunate loss of Kyle Schwarber for the season, the Cubs' surplus of talent has allowed that loss to not even be a pothole along the way. Such is the depth of Chicago that headliners such as Kris Bryant (no homers until April 13), Ben Zobrist (.246 average), Addison Russell (.234 average) and Jason Heyward (.244 average, 0 home runs) are able to get off to slower-than-expected starts without it even being much of a concern.

This is because role players such as Matt Szczur, Tommy La Stella and Javier Baez make the most of their opportunities and have been just as important as the headline names that will inevitably reach their full potential before long (and many already have). This is a team that can weather the storm through most injuries and still stay at an elite level. And despite being a part of the toughest division in baseball, it is obvious why the Cubs have been able to separate themselves not just from their regional foes (whom they have compiled a 9-2 April record against), but the rest of the National League as well.

In fact, the only team that shares the Cubs’ early impact is the team they share a metro area with. In South Chicago, the White Sox are also taking no prisoners in the start to 2016. After yet another offseason of making some aggressive moves to bolster their recently stagnant finishes (the Sox have not finished above fourth place since 2012), many were rightfully skeptical in withholding optimism about if it would make a substantial on-field result.

However, the Sox have taken the chloroform to the mouths of any and all opponents this year, mainly because they have been the most unhittable team in baseball, by far. The Sox are currently holding a team ERA at 2.24 and have compiled five shutouts and 17 quality starts over their first 22 games. Overall, opponents are hitting .207 against them, a mark that is only better by the stymying performance being issued by Arrieta and company over at Wrigley. 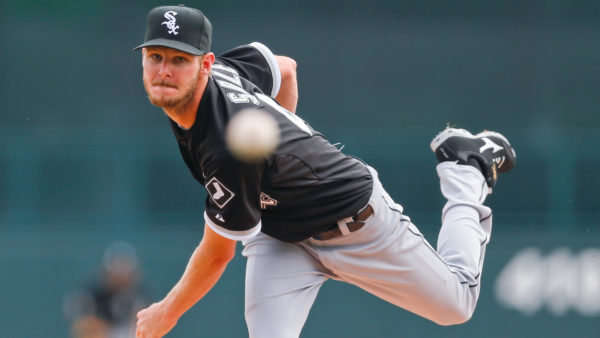 It is expected that perennial Cy Young Award contender Chris Sale goes out and turns in efforts akin to his opening-month results, which includes a closing line of a 5-0 record for April, along with a 1.66 ERA and batters managing a paltry .159 average, the fourth lowest in the league thus far.

However, things get interesting when Sale is set to the side, and it's arguable that he's even the best pitcher in his rotation thus far. This is because the early nod for “Best Value Signing of the Winter” goes to Mat Latos, and it is not even close. After signing with the Sox in early February for a mere $3 million, he has taken to re-establishing himself as a premier arm in the game, owning an undefeated record himself, as well as an 0.74 ERA and .151 average against.

The bullpen has been braced by the door-shutting ninth-inning exploits of David Robertson and his AL-best eight saves, as well as the trio of Nate Jones, Zach Duke and Matt Albers, who have combined for 19 holds and a 1.41 ERA in relief.

If all of this was not enough, perhaps the most exciting outcome of all is the emergence of Jose Quintana, who appears to be taking the next step that people have been waiting for over the past few years. The 27-year-old lefty is carrying a 3-1 record, along with a 1.47 ERA, while having not allowed a home run in his first 30 innings of the year. His continued emergence could be the singular difference between the Sox dwindling off throughout the year or remaining a presence in the AL Central race, as he and Sale could be as dominant of a pairing as any AL team can regularly offer.

Eventually, the White Sox lineup, whose somewhat slow start is masked by the excellent pitching and substantial defensive improvements the team is offering, will have to pick up the pace. New third baseman Todd Frazier (.234 average) is going to have to get his numbers up some. Jose Abreu, who is off to an abysmal .190/.271/.604 start, will come around as well, but the sooner the better. Unlike the Cubs, there is not as much room for expected improvement throughout the lineup, so it will likely take a few more unexpected hot bats to pull off the same type of feats as their contemporaries on the pitching staff to keep the Sox powering along.

While there is still a long and winding road throughout the summer, one that will be paved with Tigers and Cardinals and Royals and Pirates and Indians, as well as all sorts of other “Oh my”-invoking foes, the idea of a Cubs-White Sox showdown for the highest stakes in the game has suddenly been jolted into the collective consciousness as a possibility. And unlike when other regional foes have gone chin-to-chin in the Fall Classic, this is a matchup that is worth keeping an intrigued eye upon.

If for no other reasons, whether it be for historical expectations or based on the immediate ones, neither is supposed to be in this position. But the here and now in 2016’s baseball landscape is shaping up to be an earthquake against what predictions were before it.