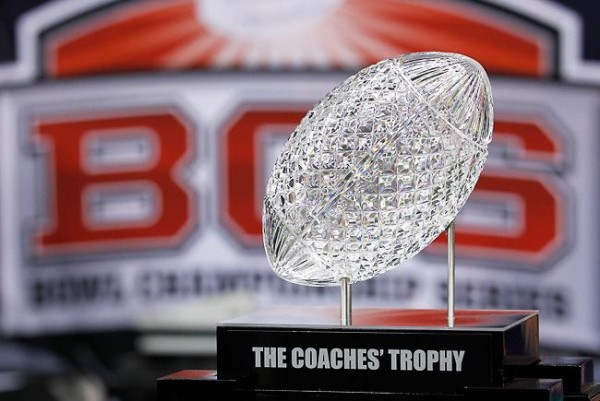 As the BCS takes its final breath with the perpetuating inevitability that a playoff will be installed, many shout for joy.

The system that has brought about computer calculations and poll averages has been hated for a number of years now. Fans of the game spew vitriolic words towards the system. It has become the enemy, the wicked witch of the sport.

Now, the BCS we've come to know for the past 14 season will die.

While that's all and good and everyone can go home with a trophy, a juicebox and a popsicle in these hot summer days, it's important to remember the role the BCS played in getting to this point.

Yes, it hindered the possibility of a playoff for a few years. That shouldn't be mistaken as television deals expanded and fans wanted some type of clear-cut winner at the end of the day.

The BCS provided splits of decimal points and radical anger. It created a monster that grew larger and larger, and now has the fans' voice being heard by coaches, committees and presidents.

Think back to what college football was before the BCS. It was a mess of deep bowl bureaucracy and firm affiliations. Michigan and Nebraska split a title in 1997 because the two schools couldn't play in the same bowl game.

The BCS helped get rid of that little error (at least with bowl affiliations), and for the most part fans saw the two best teams battle it out for the crystal football.

Did it marginalize some of the better teams who almost had glory? Absolutely, it did. Lest we forget the Auburn Tigers with Cadillac, Jason Campbell and Ronnie Brown. We feel bad for those who have been shafted in the process, yet the process mostly worked.

It worked in the way that anything with a specific endgame works. Rigidly, and without much evolution to go along with it. The BCS' purpose was to get the two best teams on a neutral field. It did a damn good job of it.

The game grew in popularity, the teams got better and the little guy got a couple of shots too. Yes, years occurred where the little guy was left out, but rightfully so. In years where they had a chance, we saw them fall dramatically. That too was entertaining.

We saw the game unfold as a dramatic, week in, week out thriller with an understanding of the importance of the whole system.

Some of us realized how damning and useless a preseason poll can be. Strength of schedule, once a dumb idea in the setup of the former bowl system, became something a program needed.

But, there will at least be a playoff system. And that playoff system? Well, it probably wouldn't exist without the BCS and the last 14 seasons.

Throw your biggest party, college football fan. May you dance on happily as they lower the old system into its grave.

All that's asked of you is to throw a rose from Pasadena as it drops down into the dark abyss.

After all, it helped get you here.