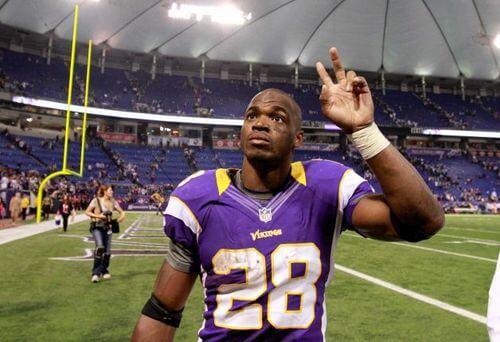 Bar none, my buddy Nick is one of my best friends on Earth. But we absolutely hate each other from September to August.

Blame it on the NFL. Blame it on him never letting me forget his New York Giants have won two Super Bowls since our last year in college. Blame it on the fact we've been doing this every year since we've resumed living in different states. Whatever the case may be, it's almost tradition for us to call each other randomly and curse one another out for no reason other than the fact this is how guys show appreciation for one another. We show love by degrading. Ass backwards, right? We wouldn't have it any other way.

Every Monday on G-Chat, while sitting at our respective desks, we recap Sunday's proceedings. The one thing we've agreed on basically all season? Adrian Peterson.

Let's get something clear: I was born in 1986, followed and studied the game of football for as long as I can remember, and I feel confident in this assessment. Not only is Peterson one of the best running backs I have ever had the pleasure of watching — he's one of the best football players. Period. Hell, A.P. is one of the best athletes I have ever laid eyes on. While it's fun to bash certain players in the league, know this: They're all fine-tuned specimens to some degree (except, maybe, a Washington Redskins Albert Haynesworth). That said, name another five players in football with the makeup of Peterson. You can't. You know why? Because he was built in a lab on Area 51.

That's the only way possible to explain why there's an outside shot 2,000 yards is in his reach. The 2K yardage mark is impressive standing on its own. Now add to the fact his leg all but detached from his body last season resulting in a top three ugliest injuries I've ever witnessed. The other two being Willis McGahee vs. Ohio State and watching Shaun Livingston's career derail in mid-air. Adrian's felt like I was watching an all-time great career get cut short. There was no way anyone could ever be the same after watching a knee pop out of place and him tear every ligament possible ending with "-CL."

Then, by God knows how, he was at near full power Week 1 and running with no signs of hesitation or rust. A.P.'s healing abilities are nothing new, however. Ed told me the story a few nights ago how he went to see Adrian play his final regular-season game at Oklahoma against Iowa State in 2006. He broke his collarbone diving for a touchdown but was somehow at a house party later that night with a Playboy Big 12 model chugging gallons of chocolate milk. Ed, being the investigative brother he is, asked the hard question, "You good?" In between sips of chocolate milk, he assured Ed he'd be back for the Fiesta Bowl in prime condition.

Now keep in mind, he just broke his collarbone no more than five hours prior to this conversation. He did return for the game, too, running for two touchdowns. Knowing this: It should come as no surprise he was ready to go Week 1 not even a full year after his leg resembled a wet noodle. 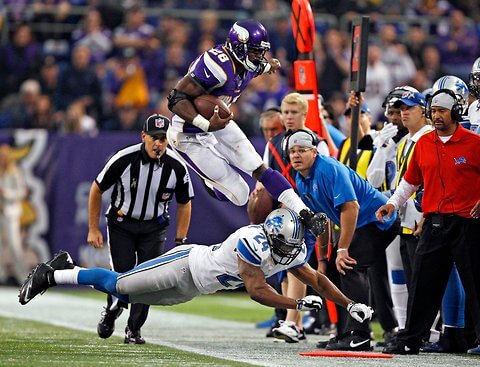 Again, Adrian Peterson was made in a lab, folks. That's the only logical explanation. The thing that scares me most about Peterson is the fact his career highlight — from a team perspective, at least — was the NFC Championship game vs. New Orleans. Christian Ponder doesn't scream franchise quarterback at the moment, especially not in a division with Matthew Stafford, Jay Cutler, some regular-season and Super Bowl MVP named Aaron Rodgers and fellow freak-of-nature Calvin Johnson. It's not Larry Fitzgerald "oh-God-we're-wasting-one-of-the-generation's-best-talents-on-mediocre-squads" bad, but it is a cause for concern. Imagine if he played in Green Bay, or New England,  or New Orleans, or ... never mind. He'd average nine yards a carry, and I'm only 45% joking saying that.

Even at 6-6, however, Adrian is my MVP. Will he win it? No, because Peyton Manning's got Denver primed and ready, and Tom Brady's just being Tom Brady in New England. And truth be told, this is really a quarterback's award anyway. That said, Adrian gets my vote off the strength I've never seen anything like this before. If he surpasses 2,000 yards (or even 1,800), I'm willing to go on record saying it's the best season I will have ever seen from a running back and somewhere in the realm of best ever from any sport from an individual standpoint.

It's time we appreciate Adrian Peterson for what he is. Appreciate him for the following reasons.

There's more, but  the point has been made. Appreciate a potentially all-time great tailback while he's getting greater. Given the way the league is currently taking form, we may not see a force this destructive yet beautiful for the next few decades. Shit, possibly ever.