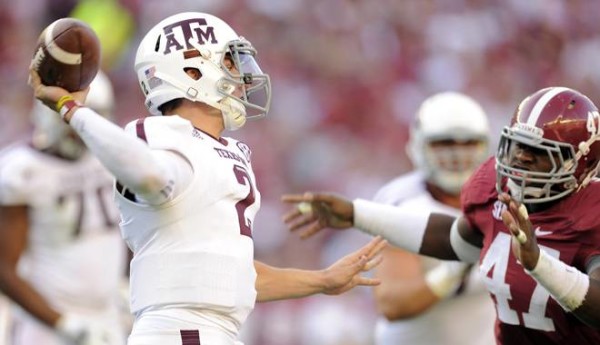 For a few minutes, forget the tangible ramifications of Saturday’s game between Texas A&M and Alabama. Close the schedule tabs on your browser, and stop cracking the 2013 SEC West code. Forget the title and Heisman Trophy chase. Drop the realities. Think and dream as they roll away.

Saturday’s game in College Station is about reality. There will be a harsh understanding of the loss, whether it derails one school’s golden ticket or another’s quest for a three-peat. Teenagers and early-20-somethings will play like hell, fight like hell, and deep down, they’ll pray like hell. This involves Texas and Alabama, states filled with kids who gaze upon spirals and stiff-arms and the victory formation with hope and belief. These factors make the game a paint-by-numbers masterpiece. The legend has been written — it’s simply up to the players and coaches to fill the blanks.

The universe college football creates is often beautiful and not without grandeur. Games we most remember hinge on herculean performances, kicks missed by unfathomable inches and comebacks started with undersized and generic linebackers fueling teammates with impromptu speeches.

These things — real things — are exaggerated. After the game ends, another one begins that resembles “telephone.” We don’t know what actually happened. We know what we remember. Our moments are held closer than the ball to a rigidly cut body as the tailback crossed the goal line.

Reality will chirp in as soon as the game ends. Polls will show us who is better, and statistics add detail to our knowledge. But, somewhere in that gallop of Johnny Manziel’s, we’ll see the fastest college quarterback we’ve ever seen. In the details of a perfectly executed blitz in Mr. Football’s face, we’ll see the unencumbered brilliance of the smartest college coach we’ve ever seen. The Tide and Aggies are merely fronts to our storybook. The fables are sturdy enough to be written by Aesop himself. This is about a coach and a quarterback, aged and youth, exhilaration and steadiness.

Texas A&M will host something much more than a football game. It will host another chapter to the book of legends. The book where readers only come to grips with “The End” when there’s a kneel-down. If college football was born on toughness, grown through pageantry and now thrives on story lines, then it’s fitting this clash will take place at College Station. There, the trains will meet. There, we’ll see what truly happens when the force meets the object. 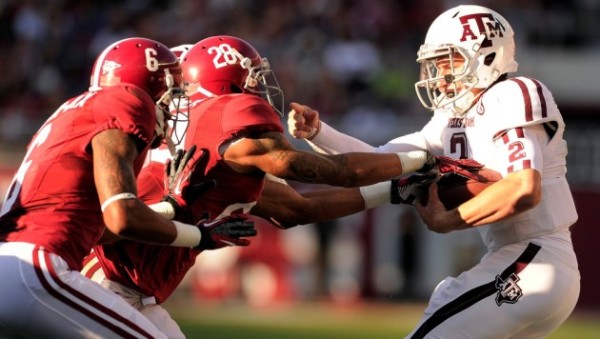 Two men separated by 41 years and united through hedonism. The will to win drives both; the desire for personal glory stands out even more. Manziel and Saban share a league, a goal and a win-at-all-cost mind-set.

That’s not meant to discount the other thousands of coaches and athletes in the world. They also long for trophies, titles and front-page spreads. When the cream rises to the top in today’s NCAA football scene, it’s a coach from Alabama and a quarterback from A&M.

Their approaches are radically different, and it’s worth supposing that age has something to do with that. Few coaches wear their hearts on their sleeves. We’re not completely sure Saban owns a heart — and it’ll be too warm in Texas for anything longer than a polo shirt. He’s cold and calculated. He’s what we know coaches are supposed to be. He lives up to the archetype, and his steely glare tells us that his persona has come too far to look back now. The only thing left to do is win more games.

On the other side is a kid who embodies a kid. No matter how much Manziel actually knows, his instinct makes him must-see television. He zigs and zags and scores. When he’s done, he rubs his fingers like he’s begging for someone to show him the money. He knows deep down it’s a joke, because it’s Johnny Football who is the money.

If you look long enough at Saban, you can envision him asking for 40 lashes each time someone drops the ball. Punishment and pain make you stronger seems like his motto. Manziel drops the ball, picks it up and runs around until he makes something productive happen. Those lashes aren’t meant for the kid. He bats his as the NCAA and media swarms about. Avoiding that punishment and pain is the motivation for his playing style.

They likely respect each other. For talent and coaching acumen, they have to — just as we must respect those things. But deep down, it’s hard to imagine they see where one another is coming from. There’s a gap there, and it goes beyond the people on the field. It hits home in America, in Texas and Alabama. It hits home because it’s what happens when the young and old butt heads. It hits home because it seems like something Aesop would write about.

Some place can be any place, and many places will put the game on the set. A kid and his old man will sit in a living room and watch Saturday’s match-up.

The kid will gravitate towards Manziel. His talent and athleticism bring flash and dash to the gridiron. Young people love the style and pizzazz. They long for the long touchdown runs and the celebrations. When the jukes and spin moves are replayed three times, kids can’t help themselves from asking if you saw that.

His old man knows better than to sell out on fancy things. At some point, talent and athleticism diminishes and all that’s left is what you know and how you know to do it. Everyone wants to be the best, but elder statesmen know what it truly takes. They know how much time and preparation goes into honing your craft. While the child loves Colin Kaepernick, the adult loves Peyton Manning.

Tug-of-war over sports is nothing new to the child-parent relationship. Picking a side opposite of the old man is a tradition. That kid would love nothing more than to see Mr. Football run for 200, pass for 300 and crush the Tide. The old man feels the same about Saban putting Mr. Flash-and-dash in his place. Humble pie is a dish best served cold. It seems like only Alabama could serve it to Manziel at the right temperature this season.

This axiom leaks over into life, and that’s why the old man sees fit to root against the whippersnapper. One day, the real world will hit everyone square in the mouth, and it might be as hard as Alabama’s defense. At some point, the old man found out life was more than pretty moments and flashy touchdowns. It was about preserving a lead, getting out of there with a win without injuries and surviving until next week. Most everyone has been kicked in the teeth by the real world, and no one seems to think that’s happened to Manziel yet. However, it’s happened to Saban, and he’s at the top of the game.

It really doesn’t matter who you root for or how old you are. Saturday’s result will tell us the truth. It will tell us if the Heisman trailblazer did it again or if the old man got his revenge.

While sequels rarely live up to the billing, it’s hard to figure why this one won’t. The football universe is and will be utterly consumed by this game. We just want to see what will happen next.

We want to know which hedonist will satisfy his craving for another week. We wonder which will go back to the whiteboard. What will it mean for Kevin Sumlin and his program if they beat Alabama two years in a row? What will it mean for Manziel’s draft stock if they lose — and who the hell will dethrone Saban’s Tide?

It will all be answered adequately enough for print, but nowhere close to enough detail for our memories. We’ll have to paint the numbers a bit brighter, so it sits on the nail alongside Catholics vs. Convicts, Tommie Frazier’s run and Desmond Howard striking a pose in the end zone. It’s too big for us to know what to create, but we’ll create it anyway.

Saturday’s game will be overbilled with hype and parades of coverage — as it should. It’s a game that must be bigger than the game itself, or else it’s not worth mentioning. We can imagine thinking about this game years from now, going on to our kids or nephews about how Manziel dethroned the champs singlehandedly or how Saban’s brilliance continued.

It’s worth the history and far more than a few hours of your time. If it seems too big to be true, it probably is. But that never made any difference for college football. It never made any difference in Texas or Alabama or Pennsylvania or Ohio. What actually happened never mattered. How we perceived it and how big it was supposed to be always did. The game — and its realities — are but a footnote in our college football almanac.

Our tall tales resemble Aesop less than we’d assume. That doesn’t matter, because the games all float back into memory as if to tell us how to live, how to cheer and how to believe.

In the Coliseum, a thumbs-up gave you life. In College Station, a thumb on the remote will give the battle new life in our imagination. The kid and the old man will battle on the field, and in the living room, and live to tell about it for years.

College football — with its toughness, pageantry and story lines — will give us another chapter in our memories, justly serving its purpose in ways only autumn Saturdays can.