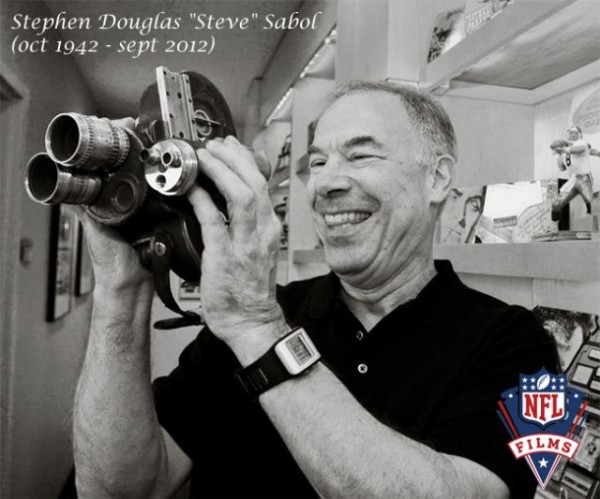 Philadelphia is a prideful city. Those born and raised in the place the Declaration of Independence originated hold up their heroes.

And Steve Sabol, the architect of NFL Films, was ours, a hero who called Philadelphia home. Sabol was born in Moorestown, New Jersey, about 40 minutes across the Delaware River from the City of Brotherly Love, and no Philadelphia-area native has ever been a bigger source of pride.

Sadly, Sabol succumbed to brain cancer yesterday at the age of 69, but his legacy will live on forever.

As football fans across America surely know by now, he played football at Colorado College, came home and started working for his father Ed right out of school. Sabol himself said it was his first job, and he never left, turning a filmmaking career into a national goliath.

Sabol, along with his father, founded NFL Films, which is still headquartered in South Jersey, and football has never been same.

You see, before Steve Sabol came along and brought a new, intimate perspective to the game, football was nowhere near baseball, America’s pastime, in popularity. Truth be told, football season was just a way to pass the time until the first crack of the bat in the spring.

Sabol changed all of that with NFL Films. He saw the intricacies and personalities of the game and brought them right to the fans. Lombardi screaming on the sidelines. The breath of players steaming in the frigid air. The interactions with referees. The agonizing over plays, penalties. Name it, and NFL Films caught it. And, more importantly, it interwove fascinating storytelling to nab the viewer. As the technology advanced, so did NFL Films. And it was all because of Steve Sabol.

He was a true visionary. The type of genius that comes along once in a lifetime. The way he had his cameramen capture the game, the way he had the legendary voices of John Facenda and Harry Kalas tell the nuanced stories of the game, the player, the coach, whatever the subject may be were captivating. He brought the NFL to life and, more importantly, he made the masses crave the game. Sabol introduced the game to people who had never had an interest in the NFL’s history and had them hooked for life.

Take, for instance, the words of our very own Justin Tinsley, who shared his thoughts on Sabol via email:

I can't even begin to really put into words how much I admired Sabol. I never spoke on him much in writings, but I always admired his trek in life and he's a large part of the reason I love football to this day. He made younger heads like myself truly want to learn and appreciate the history of the game since I wasn't around to appreciate people like Walter Payton, Jim Brown, etc., in their primes. He pursued a passion, changed the world while doing so and left an impact that can never be rivaled. I think that's what any of us want to do in life.

I echo those sentiments 100 percent, as I’m sure the large majority of football fans do as well.

See, when I think of football, I think of NFL Films first and foremost — before Monday Night Football, before Howard Cosell or Vince Lomardi, before even the legends of the game. I hear that acronym and I immediate think of the Voice of God perfecting the hard work of Sabol and his crew. That’s not by accident. It’s because NFL Films made the league what it is today.

Beyond his transformative contributions to the game he loved so much, Sabol was also a true gentlemen, a genuine person by all accounts. While I never had the honor to meet the man, I have been touched by all the tales passed along by those who knew him. More remarkable, I never encountered a single instance of someone saying a negative word about Sabol. It’s probably because he appreciated his life the way the rest of us fans appreciate the game of football itself, as noted in Peter King’s touching tribute to the man:

"So they talk about heaven, and I don't know what is waiting for me up there. But I can tell you this: Nothing will happen up there that can duplicate my life down here. That life cannot be better than the one I've lived down here, the football life. It's been perfect."

We may live in an imperfect world, but Steve Sabol was the perfect man at the perfect time to transform an entire industry and change the world in the process.

With all due respect to fantasy football, Steve Sabol is the real, true reason that the NFL is king. Without him, the game would never have reached the heights it has. With him, it became the most popular and profitable sport in the nation.

R.I.P. Steve. I know you’re up there in heaven right now, coming up with a brilliant way to share even more stories with all those who have passed, prepping Facenda and Kalas on their beautiful lines.