If baseball traffics in anything, it’s nostalgia. The powers that be and the culture at large have pushed that narrative for decades. Nostalgia is the glue that binds generations of baseball fandom.

This is why YouTube is a blessing for sports fans of all kinds, but baseball fans specifically.

For the young generation, they get to see how the game was played before their time. They get to see the “steroid era” greats and wonder why didn’t anyone state the obvious about those guys? They can see Mickey Mantle, Frank Robinson, Ken Griffey Jr. and countless others at the peak of their powers. For the older generation, they get to reminisce about days gone by. They get to watch a game that wasn’t so concerned about the “three true outcomes.” They get to see a game that was more concerned with getting hits and walks were the result of getting a lot of hits. They get to watch a game where pitchers weren’t human rain delays and kept the action flowing.

The stories behind these games also lend them significance. So without further ado, let’s get into the second installment of Mr. Getaway’s YouTube Classics.

Once upon a time in baseball land, the Yankees were a laughing stock. It’s true! The late George Steinbrenner’s constant meddling and boorish behavior started to wear thin. He’d mortgage the future for veterans in hopes of getting to the World Series. He and the franchise he owned were the butt of jokes. A franchise with a glorious history that was down in the dumps. Yankees fans of a certain age know most of the roster by heart. Roberto Kelly. Jesse Barfield. Steve Sax. Kevin Maas. Even Deion Sanders saw some playing time with the Bombers. But this Yankees team would go 67-95 for the year and this July day was emblematic of their season.

Hawkins made 26 starts in 1990 and finished with a 1.5 WHIP, a 5.12 FIP and a 5.37 ERA while averaging almost five walks per game. But this day was different. Hawkins went into the 8th inning allowing only two walks and striking out three. After getting the first two outs of the inning, this is how things went for him: Sammy Sosa reaches on an error by Mike Blowers. Sosa steals second base. Ozzie Guillen walks. Lance Johnson walks. Sosa, Guillen and Johnson all score on an error by Jim Leyritz . Robin Ventura scores on an error by Barfield.

The Yankees went quietly in ninth to lose the game.

Significance: The debut of Alex Rodriguez.

The Man. The Myth. The Legend. The best shortstop of his generation. A statistical marvel. He was so good, it made you think his performance was enhanced by something (*Beavis & Butthead laugh*).

Alex Rodriguez made his major league debut at 18 years and 11 months. At the beginning of the broadcast you can hear discussion in the booth about how Rodriguez seemed over-matched at the plate in spring training, but his glove was already at an All-Star level. There’s a young and slim A-Rod smiling in the Mariners’ dugout about to make his first major league start. If you’re a Sox fan, it seems ironic that Rodriguez’s debut occurred at Fenway Park (for obvious reasons).

To add a little more intrigue to the game, Ken Griffey, Jr. went into the game leading the league in home runs with 33. The Red Sox would win 4-3 thwarting a comeback with superb defensive plays from Lee Tinsley and Wes Chamberlain in the 9th. The Sox also recorded an unassisted triple play in the sixth.

Significance: The first episode that aired after Pete Rose was banned from baseball.

I remember this episode for several reasons. One: I actually watched it as it aired. Two: It was my 7th birthday. Three: This episode aired the same day as the Little League World Series championship game between Chinese Taipei and Trumbull, CT (the beginning of the legend known as Chris Drury). But this particular week in the MLB season was wild.

Pete Rose should be in the Hall of Fame. You know it. I know it. Everybody that watches sports knows it. But fresh off of late commissioner Bart Giamatti’s ban, the public agreed that Rose had to go. They were sad about it, but they felt the ruling was just. Rose would spend years lying about betting on baseball, but in August of 1989, no one wanted to hear it.

Not to be outdone, Nolan Ryan recorded his 5,000th strikeout that week mowing down Rickey Henderson. The story on Ryan includes interviews with major leaguers past and present espousing Ryan’s virtues. It also includes an interview with Texas Rangers general managing partner (and future President of the United States) George W. Bush.

Remember when Baseball Tonight was appointment television? I can recall many a summer night spent watching Karl Ravech, Dave Campbell, Harold Reynolds and Peter Gammons give me the highlights and the news of the day. This trade deadline just happened to occur in the middle of one of the greatest seasons in MLB history. The McGwire/Sosa home run chase captured the country in a way baseball hasn’t since. The Yankees were in the middle of arguably the greatest season any franchise has produced. Players had personalities. I miss it and you miss it too.

The big fish this trade deadline was Seattle Mariners power pitcher Randy Johnson. There were rumors that he’d be traded to the Yankees in a deal involving Hideki Irabu. The Cleveland Indians were also rumored to be in the running for his services. Some other deals from this deadline? The Cardinals trading Royce Clayton and Todd Stottlemyre to the Rangers for Fernando Tatis, Darren Oliver and Mark Little. The Giants trade Darryl Hamilton (RIP) and Jim Stoops for Ellis Burks. The Dodgers traded Dennys Reyes and Paul Konerko to the Reds for Jeff Shaw.

As for Johnson? He’d go to the Houston Astros in a deal that landed Seattle Freddy Garcia, Carlos Guillen and John Halama. Johnson would strikeout 116 batters in just over 84 innings pitched, but Houston would lose to the San Diego Padres in the NLDS. 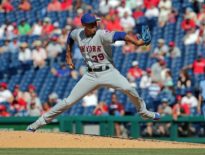 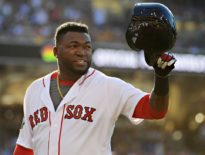 Baseball Getaway Day – Heavy Is The Head That Wears T…
0