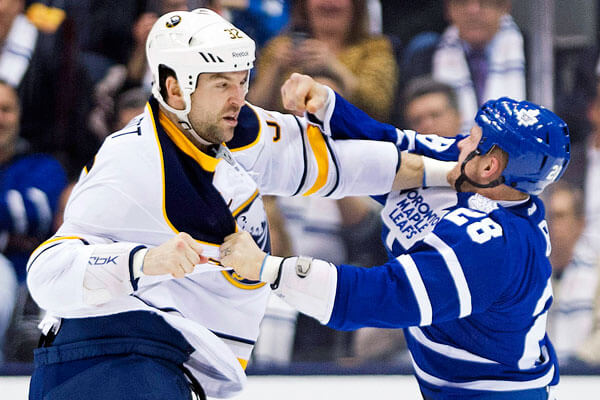 I hate to be the guy to keep harping on the NHL's relationship with the more grisly aspects of its game. But I promise you, it's good-intentioned. Last night the Ottawa Senators dismantled Daniel Alfredsson's Detroit Red Wings in the Swede's first game against his former club of 17 seasons. Bobby Ryan scored twice for the Sens in their 6-1 victory. That should be the story line of a hockey night that only featured two games. Instead, the Buffalo Sabres' John Scott ensured that it wouldn't be.

Early in the third period of a 5-2 loss against the Boston Bruins, Scott delivered a vicious check to the head of the Bruins' Loui Eriksson. Eriksson left the game with a concussion and was held overnight in Buffalo. Scott was promptly ejected.

Scott is a goon. There is simply no other way to put it. At 6'8” 259 pounds, he marauds the ice at a horror villain's pace, eager to dispatch of any bodies that enter his vicinity. This preseason, Scott stole headlines when he engaged a much smaller, much more skilled Phil Kessel. In 187 career NHL games, he has accumulated 319 penalty minutes against just five points.

At this point you should be asking yourself, how is Scott even in the league? Well, he fights and he intimidates opponents. Some of the more medieval-thinking NHL franchises believe that such a player adds value to a team even though the last two Stanley Cup champions, Chicago and L.A., played without fighters in their lineups. It should be noted that Buffalo, after Wednesday's loss, is 1-9-1 on the season.

If Scott offers little value to a good team, he offers none to a bad one. And yet the Sabres continue to feature the mammoth fighter. Luckily, Brendan Shanahan and the department of player safety will suspend Scott. Anything under 10 games would be a travesty.

Bad hits will exist in hockey so long as hitting exists. Much of it is bad luck brought on by the speed of the game. Consider this hit on Detroit's Niklas Kronwall. Kronwall turns at the last moment, causing Colorado's Cody McLeod to collide with him in a dangerous position. McLeod's attempt to avoid the contact only exacerbated the damage. He is currently serving a five-game suspension as a result.

But it's the hits like Scott's on Eriksson that can be avoided, those of the needless, predatory ilk. The NHL should continue to work with the players union to implement harsher punishments and stiffer fines for illegal hits and make teams think twice about employing the John Scotts of the league. Eliminate the offenders and you will eliminate the practice.

Cardinals Create Own Misfortune In Game One from I-70 Baseball

Playing Through from ESPN The Magazine

The Game Goes On from Grantland

We Chose This Profession from The MMQB