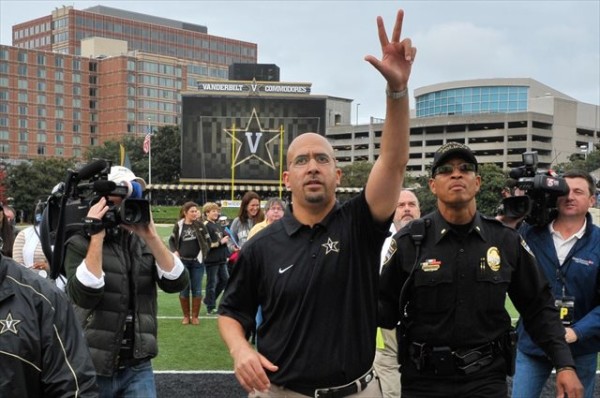 This is what I knew about the Vanderbilt Commodores football program prior to the arrival of James Franklin as head coach: Jay Cutler and Earl Bennett, who both play for the Chicago Bears these days, went there. Oh, and they were terrible. All the time. Other than that, Vanderbilt was essentially a nonentity in the college football landscape.

James Franklin changed all of that. In just three seasons at a school no one considered a good landing spot, Franklin compiled a 24-15 record while coaching in the hailed SEC. After a 6-7 start, Franklin helped lead the Commodores to back-to-back 9-4 seasons, turning a perennially losing program into a winning one.

Now, Franklin looks like he's heading home, as the Pennsylvania-born Franklin is set to take over for the recently departed Bill O'Brien as the next head coach of the Penn State Nittany Lions. The hire is drawing raves from most pundits, which has to feel extra special for a guy who was born in Langhorne, Pa.,  and attended and played football at Neshaminy High School — in the Philadelphia suburbs — and who then continued his Pennsylvania ways by playing quarterback at East Stroudsburg University.

Hell, Franklin even spent the first two years of his coaching career in Pennsylvania, first as wide receivers coach at Kutztown University and then as defensive backs coach at his alma mater, ESU.

After stints as an assistant at James Madison, Washington State, Idaho State and Maryland, Franklin spent a year in the NFL as the wide receivers coach for the Green Bay Packers in 2005. Then he was back to school, so to speak, spending time at Kansas State and Maryland as offensive coordinator before finally becoming a head coach at Vandy.

Now, if he does head to Happy Valley, he'll look to pick up where Bill O'Brien left off for his home state school, and I'd be lying if I said I wasn't excited to see what Franklin can do at my alma mater.

Oh, and here's a free bit of unsolicited advice for Franklin: Whatever you do, find a way to keep Larry Johnson Sr. on the staff. Trust me on that one.

"It Just Feels Sick": John Lurie On His Life As A New York Knicks Fan - Deadspin

Fightland Talks to: The Czech Kickboxing Champion Who Trains in a Pub Basement - Fightland

Q&A: Jesse Pires, Curator Of “Free To Love: The Cinema of the Sexual Revolution” - Philebrity

NHL selling out more arenas than the NBA - Puck Daddy

In the Coen brothers’ punishing world, morals are everything - The Dissolve

In face of Miami Dolphins’ drama, search is on for brightest talent evaluator possible to replace Ireland - Miami Herald

The Evster: The best (and worst) feelings in sports - The700Level