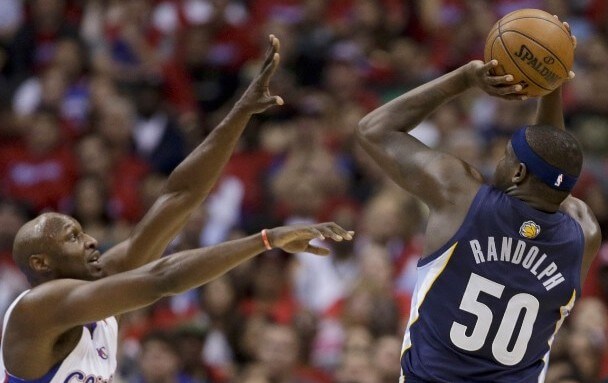 A couple of years ago, I wrote The Zach Randolph Gospel on ETSF, a work that was long overdue. I've always been a fan of Z-Bo, but I'll admit that as much as I love the man's game, I do take it for granted. It's not an excuse or some sort of rationale to try to get off the hook. Simply, it's the truth. However, leave it to Z-Bo to remind not just me, but the entire basketball-watching world, why he is what that is.

During the first two games of the first round series between the Memphis Grizzlies and the Los Angeles Clippers, Z-Bo was just out there. He wasn't bad or anything, but he wasn't that effective either. It also didn't help that he was racking up fouls at an absurd rate, especially for someone who I consider to be a superstar (that's right, I said it. Z-Bo is a superstar; an unappreciated superstar, but a superstar nonetheless).

Well, since then, Z-Bo has picked up the pace, and while he's still battling foul trouble, he's being the man people laud and helping the Grizzlies to a 3-2 lead over the Clippers, effectively stealing home-court advantage in the process with last night's win. Watching Z-Bo abuse the super-athletic front-court of Blake Griffin and DeAndre Jordan has driven Ed to the point where he is thinking about doing The Unthinkable: calling out Blake, one of his favorite players, but the reason that is the case is because he's getting outplayed, outworked and outclassed by Marc Gasol and Z-Bo, two players who have as much athletic ability as a notebook.

In the past three games, Z-Bo is averaging 25/10, effectively dominating in the post and on the wing. Jordan, Blake, Ronny Turiaf, Ryan Hollins and whoever else Vinny Del Negro has thrown out there can't do anything with Z-Bo, and it's because Z-Bo is a real man with a real man's game that is basically foreign in today's NBA landscape.

Last night was the first work night in weeks that I wasn't in the bed before 10 P.M., and the biggest reason is because I wanted to see how Z-Bo would respond to the series being tied. The man is leading the charge of the team that is already a tough out as it is, and it's safe to say that if they advance, the Oklahoma City Thunder are gonna have their hands full dealing with this basketball team, especially with Russell Westbrook out. Anyone who suggests otherwise is a damned fool.

Trust, if the Grizz advance, at the forefront will be a perennial All-Star, a throwback basketball player, someone who basketball fans truly admire and, simply put, a grown-ass man in Zach Randolph.

7 Replies to “Zach Randolph Is A Man”