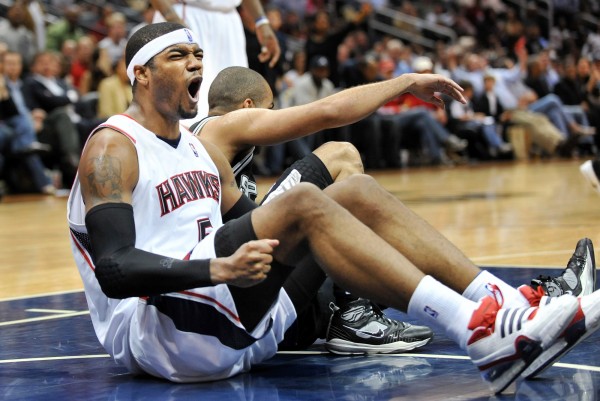 First off, it’s really hard to say that a player should not have made the All-Star team who did, and it’s pretty easy to say someone should who didn't. However, this is a process where if you’re going to say someone should make it, then someone, naturally, has to come off. That’s just the way it is, and as much crap as fans get about how much they screw up the starters (trust, I agree that it happens), the screw-ups from the coaches are damn near unforgivable, simply because, if nothing else, they’re supposed to know what they’re doing.

The All-Star weekend is supposed to be, for some players, a sign of arrival, their first time on the stage, and we all know in the game of life that you always remember your first time. Well, there's one player who won't be able to and, instead, will know it as simply another year of being snubbed.

How is it that Josh Smith gets left off the All-Star team again? For starters, he’s been the best player on the Hawks this season (simply my opinion). Al Horford went down with an injury. Joe Johnson is being Joe Johnson: Scoring in bunches and displaying the game that coaches have come to expect and appreciate. However, Josh Smith does everything for the Hawks, which has been chronicled on more than one occasion via the channels of this site.

The Inside the NBA crew knows he was robbed, I know he was robbed, and dammit, even fans who aren’t necessarily crazy about him know he was robbed. J-Smoove not making the team this year makes me wonder if there are coaches out there who truly watch the game, or if the coaches are just lazy and jot familiar names down on their sheets to turn into the League.

There is a true belief, at this point within me, that he is being blackballed. The Hawks have been one of the best teams (record-wise) in the Eastern Conference leading up to the All-Star break for the past few years, and in those years, they’ve always had two players on the All-Star team. This year, they only have one, and that’s because the other one that the coaches vote in (the theme being familiarity) went down with an injury. These coaches and their irresponsibility might be able to fool someone else, but not me.

With all that said, if J-Smoove makes it, then who comes off?

Well, as much as it pains me to say it, The Truth should come off. Paul Pierce is playing good ball, but he didn’t start coming on until later in the season, and it seems like the coaches wanted to make sure they had at least one Celtic on there (why that lone Celtic isn’t Rondo is baffling, but whatever). Pierce has made it ten times, so the familiarity is there, which further solidifies that the coaches would rather have familiarity over someone who is more deserving and, more importantly, on a team with a better record (the Hawks are 17-9 and the Celtics are 14-11). Also, I'm inclined to say Roy Hibbert should come off, but I understand that the coaches feel the need to have a back-up center which, in my opinion, doesn't really matter. The Pacers actually have a better record than the Hawks or the Celtics, and Hibbert is having a good year and all, but he is no All-Star, and this comes from someone who rides and dies for the Hoyas (the school where Hibbert played his college ball).

As has been said before, fans don’t know anything, and it is obvious now that coaches don’t know a damn thing either. This whole process is somewhat similar to the Deron Williams tirades I used to launch when he was left off of All-Star teams in previous seasons. It would be a noble idea to start allowing the players to have a say in the reserves, because with the way this is going, there are too many players who should have the opportunity to take the floor in Orlando next month and compete. However, the only way they’ll be there is as a spectator, and that’s a shame.