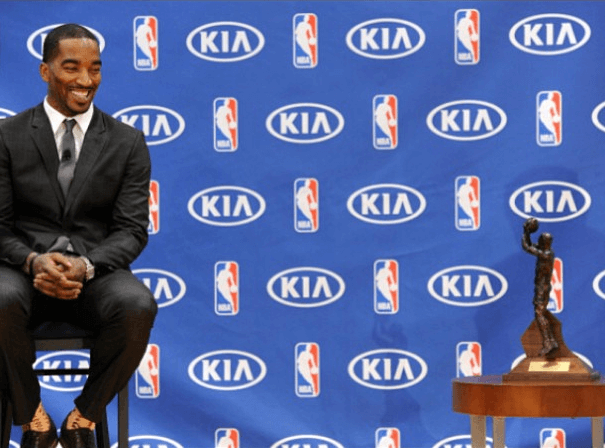 J.R. Smith, the newly crowned Sixth Man of the Year, is on the postseason scene for all to see. There are people who have thrown shade his way, people who have come for my head for my disgust with the Eastern Conference coaches for leaving him off of the All-Star roster, and people who had once labeled him as one of the 10 players you would never want on your team. The fact that J.R. Smith is here is a testament of several things: hard work; dedication; and the combination of the right role, coach and an ideal setting.

Sixteen months ago, J.R. Swish was not even in the NBA. Rather, he was toiling away overseas, in an area with a different time zone, different customs, different teammates and a radically different atmosphere, things he was not privy to, despite going on his eighth year as a professional basketball player … but his first not being in the NBA.

The man grew a goatee that would make any facial connoisseur proud. He grew his hair out, and while the jersey and colors were different than what he was used to in The League, he played with the flair of a man who knew he could ball and was the best player on the court every time he stepped on it, which showed by his league-leading 34 points per game. However, it was not an NBA arena where he was doing work. His Jordans were not screeching the floor of Madison Square Garden, American Airlines Arena or The United Center. Rather, the squeaking sounds of his sneakers were coming from his spot as a guard for Zhejiang and against a foe such as Tianjin, and while those teams may have been competitive, people were not mistaking them for the Miami Heat or the Oklahoma City Thunder.

The man did work on the court, and had to do so while his family and his old lady were in the midst of completely foreign fan territory when they were supporting him in the crowd. There were stories of altercations that took place between fans of native China and his family, and while one may have been privy to laugh them off, there was only one thing going through my mind the entire time: get J.R. Smith the absolute hell out of China.

Well, J.R. Swish eventually returned state-side, and in his first full season back in the NBA, he had yet another adjustment to make. While it was not necessarily a cultural adjustment in the sense of becoming acclimated to a foreign land, it was a cultural adjustment in the sense of a structured environment, a defined role for him and a coach that expected great things from him, but would give him his utmost confidence. The adjustment was being the first man off the bench for the New York Knicks and for his head coach, the underappreciated Mike Woodson.

Woodson basically told Swish that he was going to come off the bench, and that was that. J.R. Swish, after wasting away for a long stretch of time in China, may have felt he was inclined to start, or maybe being away from home had nothing to do with it and he just felt that his ability warranted him the opportunity to start. However, Woodson stood his ground, told J.R. what time it was, and even proclaimed that this precise moment could happen, in regards to Smith winning Sixth Man of the Year. In return, the coach let J.R. Smith play with a freedom he rarely, if ever, had in Denver. However, Woodson held him responsible, let him know what would be expected from him in his clearly defined role and, in my opinion, served as his biggest supporter from the organization.

In return, J.R. Swish had an All-Star season and even though he didn’t make the Eastern Conference All-Star Team; it wasn’t due to a lack of effort, or production or attitude. J.R. did what the Knicks asked of him, and while he had his moments of regression by falling in love with the 3-ball, he did his best to mix in a healthy dose of drives to the rim, solid play from both guard positions and provided some clutch moments to help the New York Knicks win games and solidify their spot as the number two seed in the Eastern Conference, a place the Knicks have not finished since, hell, forever.

On top of the Knicks playing well, J.R. Smith earned the award that he may have not given much thought to since his initial inclination was to be a starter before the season began: 2012-13 NBA Sixth Man of the Year. Some people will attribute this season to a sense of maturation or a story of a basketball wunderkind who fled the country and returned a changed man. I don’t know if those narratives are entirely false, and they do make for a good story.

With that said, there are people here at TSFJ who have been J.R. Swish fans from day one, and it is an absolute thrill that he is not only being rewarded for his sacrifice and impact, but that he is also being recognized as an invaluable piece of a title contender who only needed an organization to believe in him, provide him structure and for he, himself, to realize the moment and seize it.

6 Replies to “The Liberation Of Earl Smith III”