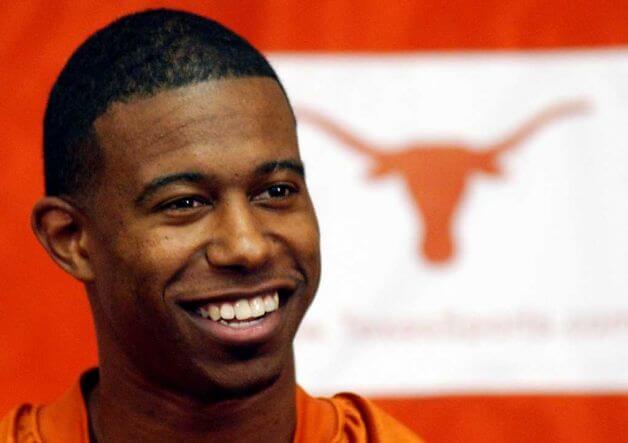 There are some players who help shape the way you view sports. The impact they made is long-lasting, and you may end up comparing any and every player to that particular one. In the state of Texas, there are fixtures here: The State Fair, UGK, The Red River Shootout, and the UIL Basketball Tournament in Austin, to name some. It was at the latter, in 2000, when my eyes saw not only the best high school point guard, by far, that I’ve ever seen in my life, but arguably the best leader I’ve ever seen. That young man is T.J. Ford.

See, in Texas, it isn’t a stretch to call T.J. Ford a legend, a basketball institution, a hero in the state of Texas. T.J. led one of the greatest high school basketball teams in recent memory with Sugar Land Willowridge. 12 years ago, I remember hearing about them well before seeing them. Growing up around some great high school teams in the Dallas-Fort Worth area, I figured it was a case of a team and their players being hyped up more than their actual talent called for, and honestly, that was the mindset since his team was based in Houston. However, that couldn’t be further from the truth.

During March of 2000, Willowridge walked into the Frank Erwin Center, and for two days, they put on a display of basketball that I had never seen at that time and, to this day, have yet to see. The team was complete with Division I athletes, and the conductor, the maestro, the director of the production was T.J. Ford. He was the smallest player on the floor, but it was obvious that he controlled everything. The man literally could do anything you wanted him to do, and played well within himself, despite playing at a speed and a pace that I’d never seen another point guard play at before.

He was frantic, yet controlled. He was fast, yet patient. It was amazing to see, and it drove me crazy that he would be doing this for the next several years at the University of Texas, which meant trouble for the rest of the Big XII. See, my first glimpse of Ford was as a high school junior. He was already that good, and after leading his team to the state championship that year, he came back his senior year and did it again. Oh, and they won 62 games in a row as well.

Once Ford made The Drum his unofficial home during those days, he went on to make it his permanent home in college. His first year was spent trying to figure out exactly what Rick Barnes wanted from him when, in actuality, there were some people who felt that Ford was so talented and such a rare breed that Barnes should have simply given Ford the keys to the car and have him learn how to drive on his own. Formal schooling didn’t teach Miles Davis how to play the trumpet, and back in those days, T.J. didn’t need to be taught by Rick Barnes how to play point guard. It’s something he already knew how to do, knew how to do as well as anyone and once the keys were given to him, the Longhorns were off and running. 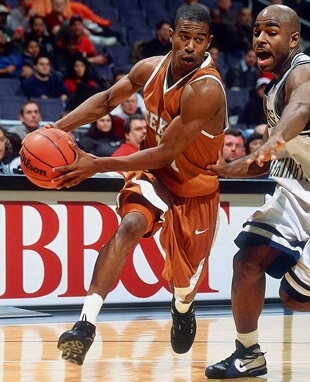 There is only one point guard who has played college basketball who set the table for his teammates better than Ford, and that man is Ed Cota, and for anyone who has been on ETSF/TSFJ long enough, they know how revered Cota is by everyone who talks college basketball on here. T.J. Ford was a maestro in Austin. It was impossible to not be a better player playing next to him. He led the nation in assists as a freshman, and this was when he was still somewhat-hamstrung at the point. He wasn’t truly let loose until his sophomore season.

He was the face of many classic battles between Oklahoma, bringing another facet to the Red River Shootout that hasn’t been seen since those days in Austin and Norman. See, people thought the Shootout was strictly about football, but the energy infused in those basketball games had a lot to do with Ford, Hollis Price, Quannas White, Aaron McGhee, James Thomas and others.

Ford’s second season saw win the Wooden Award, the Naismith Award, and lead the University of Texas to their First Final Four in school history. Ford was on a national stage, people bearing witness to his exploits and all we as fans who grew up with his play hoped for was to continue to see him do his thing, regardless of whether it was in college for another season or in the League, which he decided to do after that amazing second season in Austin.

He was the first basketball player to have his jersey retired in Austin, and for the people who grew to know Austin because of Kevin Durant, D.J. Augustine, Daniel Gibson and others, just know before all of them, there was T.J. Ford.

The NBA was a mixed bag for Ford. There were some glimpses of impending greatness, but there were times of struggle as well. He was always able to disguise the few shortcomings he had in high school and college, because his other talents were so amazing, but they caught up in the NBA. As much work as he put into developing his jumper, there’s a case that it may have come at the expense at what made him such a maestro in the first place: His ability to make everyone better and more effective on the basketball court.

He never led the NBA in assists, which is surprising, because if there’s a point guard who is the definition of what one truly is, it’s T.J. Ford. Injuries also played a role, as he struggled with neck and spine problems in years past, and they never went away, and last week, it all came to an end. The last shot he took on the court is the one that served as a signal that it was time for him to charge it to the game at the age of 28.

T.J. Ford can walk around any place in the state of Texas and he will get love, acceptance and respect like few players who have played sports will. It’s eerie if you’re not from Texas and haven’t been exposed to the amazing things he’s done here, but the man is truly a fixture in Texas sports history and at such a young age, at that.

The man has accomplished a lifetime’s worth of work in such a short period of time, and I can say that if it wasn’t for seeing T.J. Ford play in high school, when I myself was still in high school, my definition of what a point guard is on that level would not be what it is today. That’s how much of an impact he made on the game and yet another reason why I can say it was a privilege to watch him run a basketball team. There’s no doubt that there’s more to come from him, more greatness, more of an impact, now that he’s decided to end one journey and start on another.